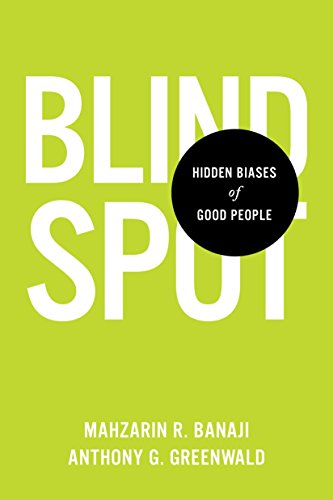 “The authors . . . ‘can show scientifically that people discriminate even when they don’t know they’re doing it. [They] just don’t know how to fix that.’”

Quick. Answer this honestly: are you prejudiced?

While many of us like to think that we are not, the answer may well be an ambiguous yes and no. In their new book Blindspot: Hidden Biases of Good People authors Mahzarin Banaji and Anthony Greenwal, argue that we are all biased.

They don’t come right out and say we are prejudiced; yet they allude to it more and more as the book progresses. Before you get defensive, let’s allow Merriam-Webster to provide a cool definition for this hot-button term: prejudice is (1) a preconceived judgment or opinion or (2) an adverse opinion or leaning formed without just grounds or before sufficient knowledge.

Although prejudice may have been essential to human survival over the last million years—helping us identify with and protect tribe and nation—it has outlived its usefulness and now presents obstacles to peaceful coexistence.

Drs. Banaji and Greenwald base their conclusions on results from the Implicit Association Test (IAT), which they developed to uncover the “hidden biases” we all harbor. Although unaware of this dynamic, people harbor hidden biases that feed the prejudices that most “egalitarians” profess not to have.

More than 14,000,000 participants have taken the IAT since the authors first established this tool as a diagnostic measure. The authors anchor their theory of bias on the comprehensive database they created from these test results. Readers are encouraged to take the test for themselves at implicit.harvard.edu.

Drs. Banaji and Greenwald don’t equate hidden biases with prejudice, but they do contend that having hidden biases produces unintended results, and that when we realize how hidden biases operate, we have a better chance at mitigating their impact on our decision-making.

The authors suggest that if more of us would actively seek to unearth and eliminate our hidden biases, society would definitely benefit.

To illustrate just how innate our hidden biases can be, Blindspot opens with an anecdote about a visiting scientist. Using an overhead projector, the professor shows the class an image of two tables: one apparently noticeably different than the other. The scientist then says, “As you can plainly see, the two table tops are exactly the same in shape and size.” Students respond with puzzled looks until the scientist superimposes a single parallelogram over each table in turn to prove his point. The tables are, indeed, exactly the same size, but none of the students perceived them to be equal.

The authors refer to this phenomenon of deceptive perception as mindbugs, a term first coined by computer scientist Kurt Van Lehn for “mental arithmetic habits that malfunction when applied in situations they weren’t intended for.”

In Blindspot, the term refers to “ingrained habits of thought that lead to errors in how we perceive, remember, reason and make decisions.”

Drs. Banaji and Greenwald explain how our brains fill in the gaps between what we see with our eyes and what our brain perceives in its attempt to complete the picture and make sense of it. The authors include lists of words and colored squares on a checkerboard as additional mind-bugging examples.

Somewhat surprising is the strong stance the authors take toward the end of the book on the issue of discrimination experienced by African Americans. They offer numerous studies to support their contention that African Americans are regularly discriminated against. Although their position here stands in stark contrast to their more neutral positions on prejudice throughout most of the book, the evidence they present for this hidden bias is compelling.

Blindspot’s index of studies, reports, and papers showing what the authors used to support their key points, provides the book additional strength. Although the IAT is a statistically solid measurement tool, the index provides those readers who seek more verification with the resources and data for that kind of undertaking.

The authors of Blindspot leave readers with an assessment of the problem that begs a solution: “We can show scientifically that people discriminate even when they don’t know they’re doing it. We just don’t know how to fix that.”