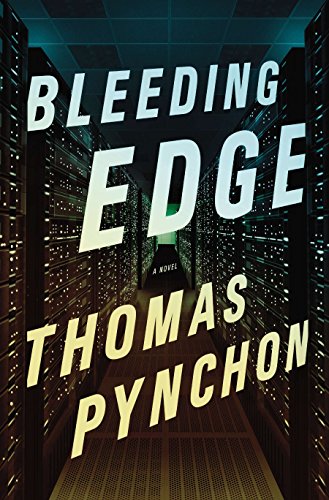 A novel by Thomas Pynchon is never easy to read (and perhaps best attempted by college students while stoned). His books, including the award-winning Gravity’s Rainbow, are long, chaotic, messy, energetic, dystopian, full of too many characters and storylines, and overflowing with invention and a Nabokovian passion for language.

Unfortunately, his newest, Bleeding Edge, is a weak, almost bored version of the genre.

The basic plot—if such a concept can be applied to Pynchon—revolves around Maxine Tarnow, a Manhattan fraud investigator and sort-of single mother. She is hired to investigate an Internet company called hashslingrz (pun alert: slinging hash, i.e., working at a minimum-wage food service job) that could be skimming profits and evading taxes at its most benign, or working with the CIA to take over the Internet at the worst, or almost anything in between.

This being Pynchon, Maxine also starts and drops a half-dozen investigations into other Websites, secret federal agencies, the Russian mob, Islamic money laundering, a clandestine video, and a local murder.

The jumble is enlivened by about 20 key characters with names like Ziggy, Vyrva, Daytona, Gabriel Ice, and Rocky Slagiatt, most of them involved with business scams and/or sexual fetishes. There’s a Jennifer Aniston impersonator, a Canadian hit man, and an expert in fragrances who is obsessed with finding out what Hitler smelled like.

In typical Pynchon fashion, these characters coincidentally keep connecting Maxine with exactly the person or information she needs to pursue one of her investigations—until she abandons that plotline anyway.

All of this action encircles the months just before and after the September 11, 2001, terrorist attacks.

Actually, the main character in Bleeding Edge is not so much Maxine or any other human, but rather the Web itself. With its hyperlinks, unlimited verbiage, and protean ability to jump to any time and setting, the Web is a perfect playground for Mr. Pynchon, and he plunges in happily.

Indeed, some of the best parts of this sprawling novel are the intricate computer games he invents. In one early game, Maxine’s sons and their friend Fiona happily shoot an apparently middle-class woman noshing from the fruit displays at a chic supermarket.

The Web and the September 11 attacks also perfectly feed the author’s normal paranoia. Why does Maxine assume that the federal agent Nicholas Windust was “abducted by earth-born aliens” as a child and trained in a super-secret “boot camp for military time travelers” on Long Island that she may have found on a computer game? Wha—? Huh? Oh, well, it’s Thomas Pynchon.

Yet even while maintaining this creative frenzy for nearly 500 pages, Mr. Pynchon seems tired. For instance, he simply adopts the actual paranoid fantasy, popular among some fringe groups: that the CIA and the Israeli spy agency Mossad were behind 9/11. Surely the writer who invented Imipolex G and Tyrone Slothrop’s little problem with bombs in Gravity’s Rainbow could come up with an original paranoid fantasy for this book.

Even worse, Mr. Pynchon has become a hypocrite. Maxine constantly snipes at “overcompensated yups,” “yups on treadmills, plodding to nowhere while watching CNN,” and various other manifestations of yuppieness.

Yet Maxine herself is a self-employed professional who is married to a Wall Street trader, lives in a doorman building on the Upper West Side of Manhattan, sends her kids to a progressive private school, shops at Zabars, regularly orders from takeout menus, sees an “emotherapist,” and travels almost everywhere by taxi.

What could possibly be more yuppie? If the author means to be satirizing Maxine, the satire is buried way deeper than any computer code.

No doubt it’s tough to maintain Pynchon’s level of energy and imagination (in addition to sheer word output). If he has slipped this time, he is still a unique and prodigious talent.