The Blazing World: A Novel 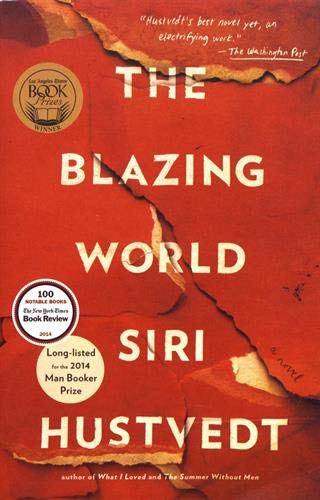 “The Blazing World is poundingly alive with ideas, personalities, conviction, fear, fakery, ambition, and sorrow. The reading mind is set on high, happy alert. But as a human, not just a reader, it’s a little disappointing to learn that even Harry, with her vast knowledge . . . is so ill-equipped to solve life’s riddles . . .”

Artist and provocateur Harry Burden is a big thunderous character reaching for constellations. Mere star-catching would be too modest a goal for the driven, wounded, intellectually voracious Harry—and it would be the connections, anyway, between the stars that would interest her most. (Harry is mad for connections.) Alternately—sometimes simultaneously—confident and craven, imperious and imperiled, the brilliant, idiomatic vortex that is big-boned Harry Burden storms across these pages like the weather, changing everything she touches.

But sharing so many characteristics with the wind—destructive, refreshing, pervasive, evanescent—only further complicates the prickly matter of “self” Harry is forever constructing, tearing down, and reconstructing.

The Blazing World takes place in the contemporary New York art scene where Harry, an underappreciated artist, enacts her revenge on a disinterested public by using male artists as masks. After a career in the background, a dealer’s wife considered a minor artist at best, she conspires to show her work under the auspices of three young men and the art world suddenly stands at attention.

The book borrows a title from Margaret Cavendish’s seminal 1966 science fiction novel—and partial autobiography!—that posits an imaginary world with a whole new assortment of stars. Cavendish’s triumph had an analog in her science writing on Experimental Philosophy. Siri Hustvedt combines Cavendish’s two discrete endeavors in a single package here, the fiction and the philosophy intertwined—as inseparable and vital as the double helix.

Not far into this probing, complex, elegant novel it’s natural to wonder who its ideal reader might be. David Markson is dead. Iris Murdoch and George Eliot, too. Among the living John Berger, Martha Nussbaum, Arthur Phillips, or Enrique Vila-Matas might miss less than other readers.

These people are all in Harry’s mind, or in the minds of those who opine on Harry, which is the way the book works—its contents are Harry’s notebooks and other people’s testimony about what’s happened. The ostensible author of a book about Harry puts the material together and interviews those in Harry’s orbit—her psychiatrist, lover, daughter, son, hangers-on, critics, and art colleagues all get a voice.

This documentary structure is so well suited to Hustvedt’s hyper-empathetic capacity and masterly ventriloquism that she must have felt, deciding on it, a joy akin to Bellow’s when he decided to have Herzog start writing letters. Maisie, Harry’s daughter, is a documentary filmmaker.

It’d be a mistake to mention the structure without the style. The book is so rich because Hustvedt can paint gorgeous miniatures in swift strokes. Take this, on the first flown-by years of motherhood: “It was babies I loved looking at, the little Lords, sensuous delights of pudgy flesh and fluids. For at least three years I was awash in milk and poop and piss and spit-up and sweat and tears. It was paradise. It was exhausting. It was boring. It was sweet, exciting, and sometimes, curiously, very lonely.” A wee novel right there. And with it early in the book we have how Harry sees company as lonely, poop as paradise, how contradictions are her common currency.

Much later a list of Harry’s influences—or intellectual interlocutors—even mentions one Siri Hustvedt, whose position Burden calls a “moving target.” Hear, hear. But Hustvedt’s deft movement is less a case of contradictory vacillating than an acknowledgment of life’s real vicissitudes.

Only the names aren’t subtle. Harry comes with Burden. Her domineering ghost of a husband is Felix Lord. Rune, the third of Harry’s artist masks, unpacks in a hundred linguistic ways. In a novel obsessed with identity and authenticity, it’s no surprise that the names come bearing, well, burdens. There is one character, steadily present if usually in the background, called only The Barometer.

But as a human, not just a reader, it’s a little disappointing to learn that even Harry, with her vast knowledge—of art, of history, philosophy, science, symbolic logic and on and on—is so ill-equipped to solve life’s riddles, however remarkably adept she is at reconfiguring and deepening the phrasing of them.

Perceiving and inventing endless connections, seeing precocious parallels, her intellectual hyperactivity nevertheless leaves her no peace. Perhaps peace isn’t the goal, happiness not the endgame of life. But Harry sure wants some; it’s not just a fate we wish for her. She wants recognition too, and maybe a hot desire for recognition always, axiomatically, rules out happiness.

See me, feel me, says Harry in nearly every action. Even when she hides behind her masks, she plans eventually a big reveal—and retribution: she wants to trick and fool and prove and justify. She wants to show and triumph. Poor Harry: everything about her—her mind, her money, her taste, her drive, her openness—is enviable, but she’s an inferno of frustration. Maybe that’s good. But it’s a lot of pain.

The reviewer must admit gladly that there is more here than he has understood. That is the case with every good book, of course, and every reader. The cross-pollination and allusiveness in The Blazing World takes in an impressive portion of modern intellectual history and I certainly missed various echoes and resonances, both recondite and perhaps right there on the gleaming surface.

Some modernist writers used to claim surprise and pleasure at all the riches critics found in their work—riches they professed not to know were contained in it. It’s unlikely a similar critical perception will arise to delight (or trouble) Hustvedt: for all its heat and ragged emotion, The Blazing World is a highly controlled environment and no unconscious item will have sneaked in past the author’s omniscient x-ray machine.

It would be presumptuous and reductive to say what a novel as complex (and many-splendored) as The Blazing World is about, but a theme that drives through it like an Entwistle bass line is “the complex dynamics of perception itself, how we all create what we see.”

This lack of fixity can be tough stuff for a realist to reconcile—and Harry looks hard at the real. The trouble with creating what we see—with privileging perception over the verifiable—brings to mind the story about a rabbi who advised people to keep a piece of paper in one pocket that reads The world was made for me. And in the other pocket a note that says: I am but a speck of dust in the universe.

Harry carried both those pieces of paper. It was her burden, so to speak, and it’s ours.

On complexity: Someone coming to this book with a passionate belief in the transformative powers and glory of art will find their convictions averred here. Yet one who comes with a skeptic’s eyes and the deeply held notion that—as Marlon Brando liked to remind people—it’s all bullshit will find potent ammunition for their fight, too. It’s all in here. And it rips Harry apart.

All great novels navigate this contradiction. For its persistence and energy, its breadth and its invention in pursuing this mandate, The Blazing World is a great novel.

As for that ideal reader: Readers will perhaps have mixed feelings about another requirement. Beyond openness, intelligence, and grounding in the history of ideas there is also the matter of stamina. For it’s clearly the case here (and everywhere?) that you get out what you put in, that the novel’s rewards and pleasures are multiplied by one’s magnitude of engagement.

Let’s play the parlor game once more. What about John Updike, who knew something about frustrated, angry Harrys? (Of course Updike’s unlearned Harry Angstrom—Angst, Burden—had to be lent his vast cosmology by his author through a trick of osmosis, while Hustvedt imbues her Harry with all the intelligence she needs to consider the giant questions of the age—or ages.)

The irony of Updike, his fiction often accused of lacking rounded women characters, being a perceptive reader of this novel with its big complicated feminist hero—who by the way either does or does not subjugate that feminism through her male masks—is fun to note. After all, this is a novel as rich in irony as metaphor, a startling achievement. And besides, Updike knew his Kierkegaard. The game could go on and on. What about Virginia Woolf?

One thing is certain: Being Siri Hustvedt’s ideal reader is a goal in pursuit of which any amount of striving would be justified. The sinecure might be called the polymath’s pleasure. It’s a delight—and something of a surprise—to know that Hustvedt’s books sell so well. It’s a fact one might hold up against all those decriers about civilization’s demise.

And finally back to stamina: Harry does a boffo job of wearing out everybody that enters her domain, including herself, and when a reader gets between these covers with Harry he may as well be getting between the sheets with her, too. It’s intimate: it’s Harry’s world in here (if only she knew it!)—and if she’s haunted by her dead husband and father, by modern history and her own past, she haunts back with the best of them. She’s a big woman with a long shadow. And she’s her own constellation who turns the others in her universe into stars.