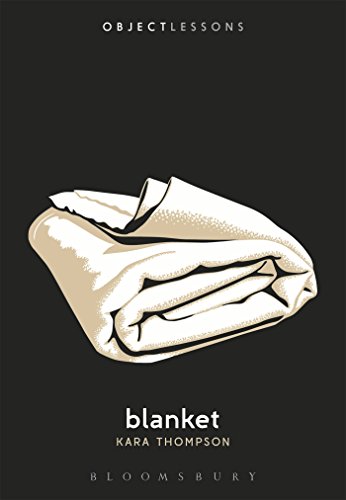 Bloomsbury’s Object Lessons series offers small, pocket-sized books big on ideas and insights into the theoretical and cultural implications of everyday objects. The series has given us 32 of these gems so far, including sharp observations and thoughtful reflections on physical objects (e.g. eggs, remote controls, and eye charts) and more abstract concepts (e.g. silence, waste, and “fake”). The gift of these volumes is how they tease out the unexpected associations and implications of their subjects, and Kara Thompson’s Blanket is no exception.

The idea of the blanket evokes concepts of comfort, safety, containment and protection, and Thompson plays to that expectation with references to Peanuts’ famous security blanket addict, Linus, and parts of the personal narrative folded into the book.

Thompson explores the childhood death of the author’s brother and describes how even before his death she was haunted by ghosts. Blankets saved her, whether she dragged one to another family member’s room to sleep on the floor or hid under those piled on her own bed.

Thompson also convincingly connects the idea of the blanket to more disturbing concepts, i.e. bullets, school shootings, racism and genocide. The full metal jacket bullet consists of a soft core “blanketed” by a hard steel shell that makes the bullet less likely to deform or flatten/expand in a human body. In theory, this type of projectile protects humans from more severe wounding, but focusing on that is a type of “cover” for the purpose of bullets: to wound and kill the living.

Literal blankets, of course, have been used as weapons intended to kill entire populations. Thompson revisits the 19th century when the U.S. military intentionally gifted smallpox-infected blankets to Native Americans and the term “blanket Indian” described those Natives that white settlers viewed as backward and resistant to their (so-called) civilizing efforts. She also complicates that traumatic narrative of blankets by introducing evidence of the healing significance of blankets to the same decimated tribes. Dakota writer Zitkala-Sa describes the fear and upheaval of being forcibly removed from the tribe and sent to boarding school then asserts her first, immediate comfort: “I buried my face in the folds of my blanket.”

A century later, Sherman Alexie’s protagonist in the story “War Dances” mocks the stereotype of Natives with blankets but still accepts a blanket into which a Lummi man sings a healing song for the protagonist’s dying father.

As Thompson relays in multiple ways in Blanket, “Pain and pleasure commingle in the blanket’s fibers.” The fold in a blanket reveals one side while concealing another. An unfolding and refolding will reconfigure what we see, and the section titles of the book reinforce this.

Blanket is a convoluted book, intentionally so. Thompson reminds us that convolute “describes something rolled into itself, as in a leaf or a flower bud, or a blanket . . . is a type of fold, so that what is interior and hidden eventually becomes exposed, exterior—an infinite unfolding.” And so Thompson weaves together in her Blanket dichotomous ideas about blankets—art versus utility, hard shells versus soft wraps, infection versus protection—to illuminate the ways in which these may all be different sides of the same thing.

We are wrapped in blankets when we are born, enshrouded by them in death. This truth, pointed out in the introduction, is more than enough justification for a book on the cultural significance of the blanket. Yet Kara Thompson continues through her “unfoldings” to educate and surprise readers with new threads to follow and contemplate long after the small, but densely woven Blanket ends.