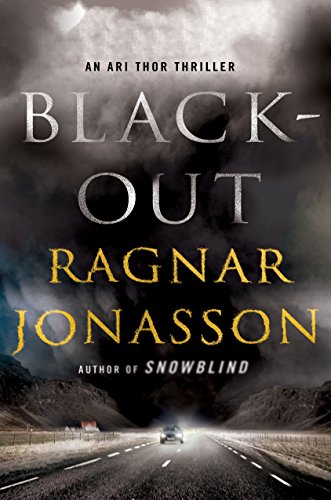 “A deeply satisfying read, Blackout . . . will leave you hungry for more.”

Icelandic Noir is a relatively new phenomenon on the literary stage, but the style has definitely found its place in readers’ hearts around the world.

One of the names firmly entrenched in the genre is Ragnar Jonasson, author of Blackout, the third in his Dark Iceland series.

Iceland’s nonviolent culture sets up a complication for crime writers. As Ragnar—Icelandic custom uses a person’s first name—discusses in a recent interview for the Houston Chronicle, “Iceland doesn’t have many murders—maybe two to three per year.” Further, “no police officer has ever been killed in the line of duty in Iceland. Conversely, in the entire history of Iceland, the police have only fatally shot a suspect one time.”

The occasional murder does happen, however, but the surprise of a murder in a small peaceful community adds to the tension.

As with much Nordic Noir, Ragnar’s series follows a police officer, the young and inexperienced Ari Thor.

Blackout also follows multiple other characters, including a journalist who has a mystery of her own to investigate, and one of Ari’s colleagues struggling with a past he desperately wishes to forget. “Hlynur could hardly bring himself to think back to those days. His conscience had become an increasingly heavy burden as he grew up.”

Though the multiple points of view keep the reader at an emotional distance from any specific character, it also puts the reader in the voyeuristic position of viewing the complex story from every angle.

This does not mean, however, the characters don’t feel layered and nuanced. Like his hero Agatha Christie, Ragnar creates fully developed characters with just a few lines.

“He was much too young for her, of course, although she refused to rule anything out. He was a serious character, with dead eyes, she decided, as if he had lost something precious.” Ragnar’s attention to human psychology shows us something intimate about both the older woman musing on a younger man, and the younger man himself.

What Ragnar may do best, however, is provide us with atmosphere. He manifests darkness out of Iceland’s 24-hour daylight summer through a volcanic eruption, which spews ash into the air. “The sky was unusually dark, the sun hidden behind the think mineral haze, even though there wasn’t a cloud in the sky.”

A man is brutally murdered on a sunny day in a picturesque small town to the north, while far away in Reykjavik to the south, the journalist “felt ash settle on her tongue, as she breathed, as if she had had a mouthful of sand.”

Blackout does not move at the breakneck speed of a thriller, nor does it view the world solely through the eyes of a detective, as one might expect from a police procedural. What it does do, is jump the reader from character to character, each providing a piece of the puzzle.

The fun of the novel lies in tracking all those pieces, and trying to solve the crime before all the pieces have been fit together.

Written in an almost literary style, Ragnar still finds moments of levity, as with a man remembering his late wife’s rich cooking as “a slow but delicious way to hasten an early demise.”

The novel ends with a plot twist most readers won’t see coming, despite all the clues dropped along the way. A deeply satisfying read, Blackout may be some readers’ first introduction to Icelandic Noir, but it will not be the last. Blackout will leave you hungry for more.