Blackett's War: The Men Who Defeated the Nazi U-Boats and Brought Science to the Art of Warfare Warfare 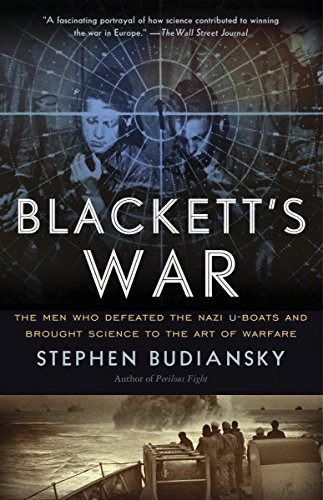 “Stephen Budiansky has mastered the difficulties of the story, making it very readable and compelling.”

Stephen Budiansky is an experienced author who has used the novel, the monograph and biography, as well as the op-ed piece and the scholarly article, to disseminate his work. His topics have been disparate, including the historical (Revisiting the Haunted History of Gettysburg), the musical (Fats Waller, Composer), and much else in between.

Mr. Budiansky’s most recent work Blackett’s War tells the story of the grave threat to the United Kingdom represented by the German navy’s U-Boat force during the Second World War. The Allies ultimately defeated the effort, but Winston Churchill later even confessed to having feared the Ubootwaffe as the weapon most likely to bring Britain to its knees.

Indeed, the British considered that even the knowledge of the true extent of the U-Boat threat, as well as the means by which that threat was turned aside, was so crucial to the security of the United Kingdom they suppressed its public release for decades following the Second World War.

Blackett’s War is decidedly not in the tradition of books on naval warfare by such experts as Samuel Eliot Morison, Stephen Roskill, and others. There is, in fact, very little in the book having to do with the captains of German submarines or their crews, nor about the Allied sailors and airmen who proved to be their undoing.

It is instead the story of a very loosely formed group of brilliant British and American scientists and technicians whose work enabled the Allied navies to eliminate the U-Boats as a threat to Britain’s existence.

The complexity of the problem demanded that the people involved in trying to resolve the issue have a broad range of training and experience. And because of the complicated nature of the saga, it is not well suited to a linear retelling. As a result the author’s structure is in the nature of a set of short stories united by a single theme.

Mr. Budiansky begins his work by providing the reader with a “backstory,” that of the little known secret war over German wireless communications.

Throughout the war, the German armed forces, including submarines, relied upon a sophisticated cypher encoding/decoding device to protect their wireless communications.

The German military believed implicitly in the impenetrability of the cypher machine, dubbed “Enigma” by the British. But the device had been in use by the German military since as early as 1932. Much more importantly, the Poles (1932), the French (1938), and the British (1940) all knew enough about the machine and the manner of its operation to have been reading Enigma traffic for a number of years before the Second World War even began.

The task of defeating the German submarine force, however, was not simply one of cryptology. Experienced German submarine commanders, even when taking for granted the indecipherability of their radio transmissions, adopted more practical strategies to place their boats among the Allied convoys without being detected. These tactics also required intense study by the team of scientists in order to deny the enemy the opportunity to take evasive action at sea for their own safety.

The Patrick Blackett of the book’s title is one of the people whom the author utilizes to tie together the many strands of his story. Blackett began his active life as a naval cadet in 1910 at the age of 12. As a teenager he experienced the reality of war, notably at the Battle of the Falkland Islands (1914) on the cruiser HMS Carnarvon, and again in 1916 aboard the battleship HMS Barham at the Battle of Jutland.

Blackett made his contributions in spite of a lifelong commitment to leftist politics in Britain, a commitment that he renewed immediately following the end of the war. In 1948 he received a Nobel Prize in recognition of his discovery of the positron in 1933.

Another important scientist, chemist Sir Henry Tizard, made good use of his political acumen, gained during his many years conducting scientific business in and among government committees. And his extensive ties to the American scientific community facilitated the project’s very real need for as many brilliant scientific minds as could be harnessed to it.

A particular factor that Mr. Budianski manages to bring out with admirable clarity is the reluctance of two senior Allied military leaders to contribute to the campaign to defeat the German U-Boat menace.

King had been a naval officer for his entire adult life. He was ambitious and as single-minded as a Terrier. He was also irascible, abrupt, and intolerant of those whom he judged incompetent or ineffectual.

Most importantly, he held both civilians and the British in general in contempt. As a result, he was less than cooperative in providing naval assets in support of the anti-submarine war.

The British officer whose personality hindered the effectiveness of the scientists working on the U-Boat problem was Air Chief Marshal Sir Arthur Harris, nicknamed “Bomber” to reflect the intensity of his conviction that strategic bombing would bring the enemy to the bargaining table. In his case, “area bombing” of German cities meant the use of tens of thousands of incendiary devices for the purpose of creating a manmade firestorm.

Harris too was ill tempered and single minded. The obstacle he erected with regard to the anti-submarine war was to refuse, at least initially, to release some of the heavy bombers in his command for use in hunting U-Boats.

Blackett’s War is not intended for the casual reader. The subject matter is often quite technical, the individual personalities of some of the principal actors are unpleasant, and the style of the piece—really forced on the author by the nature of the topic—requires the reader to remain conscious of the story’s timeline.

Nevertheless, author Stephen Budiansky has mastered the difficulties of the story, making it very readable and compelling. And for the student of the war at sea, 1939–1945, Mr. Budiansky has produced an important work that enriches the literature in the field.