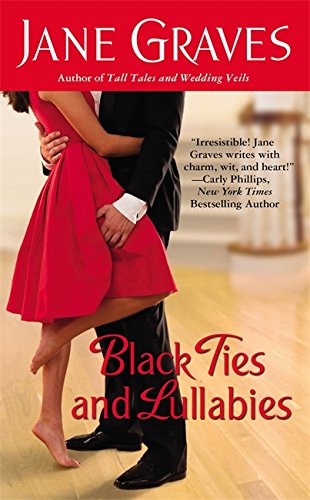 “Ms. Graves does a fine job of balancing sharp, sexy humor with warm, authentic emotion. Bernie and Jeremy make the reader both chuckle and feel their pain—a truly potent combination. Black Ties and Lullabies is warm, charming, funny, and a delight to read.”

Bernadette “Bernie” Hogan is not your typical romance heroine. Ex-military and a professional bodyguard, she is one tough cookie. Which makes it all the more fun when she becomes intimately entangled with Jeremy Bridges, the spoiled playboy she can barely tolerate keeping alive. Black Ties and Lullabies is all about revealing the heart hidden behind the façade of each of its characters—and the discovery is pure pleasure for the reader.

Bernie spends her time escorting Jeremy to charity functions, watching him pick up various blond bimbos, and escorting them back to his bachelor pad—all while mentally composing her resignation letter. Because she’s the best in her field and Jeremy knows it, Bernie has come to feel secure enough to tell him exactly what she thinks of his lifestyle. Their edgy banter is authentic and extremely funny, and, of course, fans their awareness of each other.

Bernie sticks with the job only because Jeremy pays her an exorbitant amount and she needs the money. Finally though, Jeremy ignores her warnings one time too many, resulting in a home-invasion-style robbery attempt. Bernie manages to get him into the “safe room” in his house and call the police, but she is enraged by his disregard for her professional advice. They have a rip-roaring fight that results in Bernie’s resignation—and a highly-charged sexual encounter.

The fallout from the evening sets in motion a chain of events showing us the complicated person behind Bernie’s tough exterior. She lives in a rundown apartment complex (for financial reasons) and acts as the unofficial tenant representative, using her take-no-prisoners persona to scare the lazy manager into fixing things for her fellow renters. She worries about her mother’s increasing forgetfulness—as it turns out, with good reason. She attends poker nights with her fellow bodyguards where the dialogue is side-splittingly funny. And she begins to force Jeremy into becoming a better human being.

Perhaps the only quibble one might have with the book is Jeremy’s somewhat stereotyped character. Ms. Graves gives him some quirks, such as wearing his bow tie untied and his running shoes with his tuxedo at the charity events where he is courted for his prospective contributions; however, mostly Jeremy appears to be just a typical self-indulgent playboy: enjoying the sexual conquests and fast cars his money can buy.

The fact that he pulled himself up entirely by his own bootstraps might have benefited from slightly more development. Jeremy is never entirely convincing as a smart, ruthless self-made businessman, although he begins to demonstrate some endearing insecurities about his origins as he and Bernie butt heads over his desire to take care of her.

Yet he provides a worthy foil for Bernie in their hilarious verbal duels, and he has his own brand of charm. When Bernie expresses concern about the cost of something, Jeremy holds out his hand and says, “Uh . . . have we met before? Hello, I’m Jeremy Bridges. I’m a multimillionaire.”

The cast of secondary characters contributes mightily to the book’s piquancy. Bernie’s elderly mother is sensitively drawn and provides some of the more emotional scenes in the story. Max, the bodyguard who replaces Bernie as Jeremy’s protector, is a marvelously taciturn and menacing presence who takes a surprising hand in the lovers’ relationship. Bernie’s fellow tenants and a ne’er-do-well cousin are vividly sketched and give both Bernie and Jeremy opportunities to show their true colors. A priceless scene with a New Age birthing coach named Crystal will leave the reader helpless with laughter.

Ms. Graves does a fine job of balancing sharp, sexy humor with warm, authentic emotion. Bernie and Jeremy make the reader both chuckle and feel their pain—a truly potent combination. Black Ties and Lullabies is warm, charming, funny, and a delight to read.