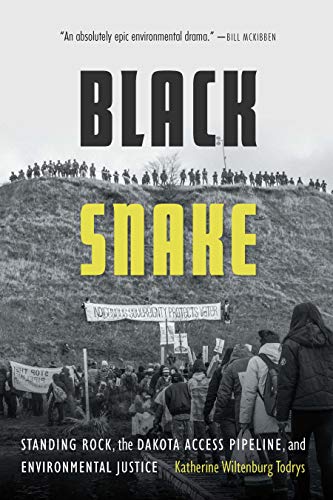 “All Americans who care about the fate of Native Americans and about clean water, clean air, and a non-toxic earth will find Todrys' book inspiring.”

The protests that took place at Standing Rock in North Dakota in 2016 attracted worldwide attention.

Now, Katherine Wiltenburg Todrys, a lawyer and a former researcher at Human Rights Watch, has published a riveting account of those dramatic events in her new book, Black Snake: Standing Rock, the Dakota Access Pipeline, and Environmental Justice.

The title comes from a Native American prophecy that a black snake would come out of nowhere and devour the earth.

The prophecy seemed to come true when construction began on the Dakota Access Pipeline that would bring oil from the wilds of the northern plains to cities and towns all across the US.

Native American tribes opposed the pipeline because it crossed their traditional lands and threatened to harm ground water and pollute the earth. Protesters called themselves “water protectors.”

They had “started flooding in,” Todrys writes in chapter four. “The cluster of tents, tipis, and vehicles in the grass was quickly growing.” Several black-and-white photos depict the spectacular encampment.

Katherine Wiltenburg Todrys vividly describes the gathering that brought together thousands of Native Ameericans and their supporters, who called for an end to the construction of the project. They were unsuccessful, but they did raise awareness about environmental justice.

They also demonstrated to the world that indigenous Americans had not vanished from the US, nor had they surrendered their spiritual and political powers.

The author is clearly on the side of the protesters and their cause, and against corporate oil interests, but she tells a warm and compassionate human story and for the most part avoids the polemical.

The four women speak in their own impassioned voices and offer an unglamorous and unromantic portrait of Indian life today. Anyone who thinks they might like to live on a reservation will be rudely awakened.

All Americans who care about the fate of Native Americans and about clean water, clean air, and a non-toxic earth will find Todrys' book inspiring.

“Following the closure of the camps, activists organized the Native Nations March on Washington, D.C.,” Todrys writes. “Thousands joined for four days of events in March 2017, including a tipi encampment on the lawn next to the Washington Monument, and a march from Army Corps headquarters to the White House.”

Black Snake belongs on the same shelf as Dee Brown's Bury My Heart at Wounded Knee and Peter Matthiessen's In the Spirit of Crazy Horse.