Black Light: The World of L. B. Cole 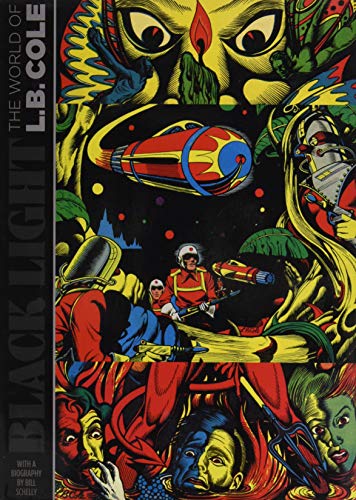 In the history of comic book covers it is safe to say that no one ever approached cover art with the eye of L. B. Cole. His flair for design and his way of using bold bright colors and balancing them against total darkness or even snow blinding whiteness was completely individualistic. No one could take you into outer space the way he could, and few if any artists ever made covers as wildly graphic as he did during the Golden Age of comic books.

Black Light: The World of L. B. Cole brings one of the most adventurous and imaginative artists ever seen in the medium to the forefront of the greats.

Cole put a skull on the body of a spider and filled his cover with that spider’s web.

Ignored for decades, written off as the dreck and dredge of the comic book industry for just as long by parents and politicians, the covers created by artist L. B. Cole rank among the most expressive, wildest, insane, unintentionally psychotic/psychedelic, and near-perfect covers ever constructed for a four-color comic book—big sentence for a big book and a big artist who created comic book covers that he felt were “posters”!

The competition for a reader’s dime during the Second World War and the decade that followed was intense. Cole was a businessman with a finely-tipped brush. He created a cover with one reason and one reason only, he wanted you to pick that book up off the newsstand. Nearly everything that he drew for a cover, and he did somewhere around 1,500 covers for comics and magazines over the years, was meant to draw your eyes straight to that book.

Over the course of 272 pages Fantagraphics reprints coves that Cole created for superheroes, funny animals, science fiction, jungle, western romance, horror, crime, and just about any genre of comic books that you can think of. His range is phenomenal.

Many of the covers are greatly enhanced by larger, 10” by 13” format of this anthology of classic art. The larger size often reveals detail that get lost in the rush to read a comic. Small images such as the few drops of blood that fall from the chest of a slain native (Suspense Comics #5 (August 1944) or the silhouette of a man falling off of the balcony during a shoot-out on Crime-Fighting Detective #19 (March 1952).

As insane as Cole’s work could be, he still understood the power of an emotional connection. His covers for the aviation-themed title Contact Comics are perfect examples of how commercial art can also stir feelings of patriotism while remaining product.

Cole didn’t work for Timely (as Marvel was known as during the forties) or DC. During his earliest days in the field he watched and learned about the comic business from the ground up. Cole worked for others who had set up shops which hired artists and writers to produce comic books for publishers with no creative staff.

These shops contracted with second-tier publishers such as Holyoke and Continental but Cole wasn’t happy working for others. He preferred to work unencumbered by supervision. During this time he produced one of the most memorable comic covers ever, Suspense Comics #8 (June 1948).
This is the previously mentioned Spider with a skull head issue. The spider dominates the cover as a man and a woman are trapped in his web. One of the most amazing and creepy images to ever grace a comic book.

As to Cole’s style, Bill Schelly breaks it all down in his wonderful foreword. Filled with details about the artist’s style and insights into his life and training, Schelly’s portrait is of a man who knew exactly what he wanted and went straight for it. The story Schelly tells makes a case for this book becoming an essential educational tool for any artist entering the fields of comics, graphics, the art business, or design.

The funny animal covers are wonderful. It is as if Disney and Warner Brothers characters were created in a parallel dimension. They trippy and hilarious and strangely perfect for kids.

Cole had incredible range as an artist. He could draw the most horrific scenes including gunfights, horses tumbling, slaughter and then turn around and create a cover for Boy’s Life that screams of a perfect America or a Classics Illustrated Junior featuring The Enchanted Pony.

Other memorable covers feature a woman literally tormented by the flames of love, another woman fighting a gigantic shark with a knife, and a man throwing a trout in the face of a law enforcement officer who was chasing him.

This is the largest collection of Cole’s work ever assembled. These are the covers your mother warned you about and that the Senate didn’t want you to see. They are also pure American art. They say as much about our country as Norman Rockwell. Maybe even more.