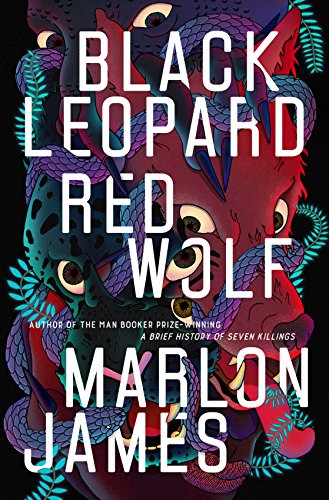 “Marlon James delivers a twisting, hallucinatory epic fairy tale that delivers a punch that can be felt ’round the world.”

Putting to words a description of Marlon James’s dense, intense prose is like drunk tap dancing while juggling squid . . . not impossible, but so damn hard it gives one a headache.

Set in a world that is based on Iron Age Africa (in rival North and South Kingdoms), this epic fantasy is set in multiple parts that thrusts the reader into the twisting, multi-storied tale of Tracker (Red Wolf), a sensitive, angry man, who seeks to find a lost boy for a powerful client. That is genesis of this tale, but it turns out that this core narrative nearly becomes overwhelmed by the audacious world building and intense (often too much so) violence into which the reader is thrust.

“Not everything the eye sees should be spoken by the mouth.”

Tracker lets us know that the boy is dead, but that is merely a side note to the overall story, which is the tale he is telling to the inquisitor after being jailed for the boy’s murder. The inquisitor has Tracker relate his life’s story, then the details of his quest (how he uses his nose to track the boy from city to city, across rivers and forests), which evolves into interlocking stories about demons, a queen, slavers, dark magic and the tensions between the North and South Kingdoms. The reader soon learns that in this world humans live in constant threat of being killed or raped (or both) by witches, demons and vampires, turning this world from one of fairy magic to a dark and grim thrill ride.

Along the way we are introduced to his lover, the Leopard, the healer Sangoma, Salogon, a Moon Witch, Ogo the giant, a former lover named Nyka and more, each one given a unique depth and a singular voice that James has made feel real.

A strange fusion of fantasy, mythology, African history, as well as a coming-of-age story, social commentary and psychological LSD trip, it slaps the reader with its manic intensity. Marlon James weaves a vivid tapestry of an epic that defies casual description, a fairy tale on LSD. Soaked in casual, cinematic violence that would put Tarentino to shame and the kind of prose that would give Tolkien pause, Black Leopard, Red Wolf is definitely not for everyone.

One must possess a stubborn desire to forge ahead through the jungles of dense narrative and have enough callouses on the soul to weather the grim, often brutal, plot. The faint of heart need not apply, but if you have the fortitude, then read on. All in all, Marlon James delivers a twisting, hallucinatory epic fairy tale that delivers a punch that can be felt ’round the world.