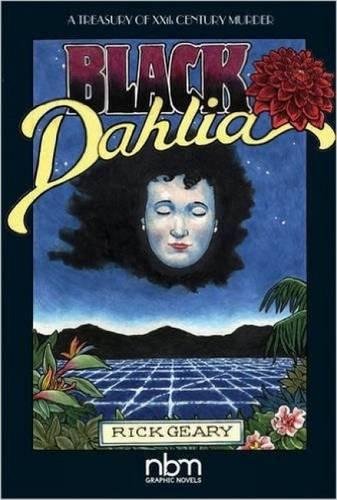 The emergence of the comic book to a more mature graphic novel can easily be equated to a butterfly rising from a cocoon.

This is seen most effectively in Rick Geary’s Black Dahlia. An author who both writes and illustrates graphic novels in A Treasury of XXth Century Murder, Geary skillfully takes this story down to a readable format by dividing it into five logical parts that visually follow the story’s progression from its gruesome beginning to its inevitable conclusion.

The Black Dahlia recounts the murder in January 1947 of one Elizabeth Short, a star-struck young woman looking for celebrity in the glamor capital of the world—Hollywood, CA. The murder defines the word “grisly.” Dismembered and drained of blood, Short’s body was dumped in a Hollywood park, setting off a storm of failed searches for answers.

Geary starts the story with Part I in the vacant lot where Short’s body was discovered, and he visually shows how the lot quickly became overrun with police, newspapermen, and the general, thrill-seeking public. Compromised evidence is collected and the body moved for examination, and this is the start of a failed investigation.

In Part II, Geary recaps the life of Elizabeth Short, including growing up in Massachusetts and her travels to Hollywood to take her chances at fame and fortune in the movie industry. She becomes engaged, but her fiancé’s death in World War II began her downfall. With the loss of the man she loved, she comes to life as a vivacious young woman who attracts men like moths to a flame.

Part III describes her last days. Here Geary pieces together her friends and acquaintances. Each piece of information, regardless of how big or small, adds dimension and depth to Short’s life. Short’s personality emerges on a multitude of levels, “ambitious . . . submissive . . . friendly . . . streetwise seductress . . . and the perfect victim.” Each new clue complicates the search for that one path that will lead to the answers about her death.

In Part IV, Geary scrutinizes the investigation and describes the many rabbit hole clues the police unsuccessfully followed. A series of fake confessions, both in writing and in person, clutter the investigation further and the police waste precious time eliminating each, while at the same time making no progress in finding Elizabeth’s killer.

And finally, Geary wraps up the status of the crime in Part V. It is here that he discusses “the long series of unsolved murders of women . . . going back several years.” Connections with organized crime begin to bubble up to the surface—connections that lead directly to a corrupt Los Angeles Police Department. The LAPD undergoes a deep gutting while the Black Dahlia case goes cold and remains so to this day.

The use of the graphic novel to recount a true crime is a step beyond the Archie, Batman, and Donald Duck comic books so popular with children and young adults of another age. The style has matured and appeals now to adults of all ages.

The Black Dahlia is one of many graphic novels in this series, and Geary does justice to telling the story. If the rest of the collection is this well done and this interesting, the series would be a good addition to the library shelf—one guaranteed to raise questions and probably be pirated.