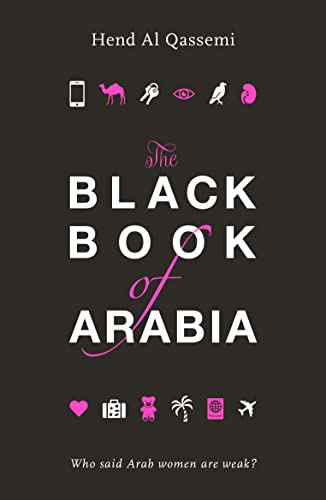 For the average Western reader, diving into Hend Al Qassemi’s debut novel Black Book of Arabia is an eye-opener. Couched in a series of short stories, Al Qassemi’s book gives a bird’s-eye snapshot of Middle Eastern culture in several countries. The author is a Sheikah from the United Arab Emirates and editor of a high fashion magazine, lending her tales of the Arab world’s upper crust a ring of authenticity. Her world is one of privilege, jewels, education, and servants, and many of her stories revolve around this Lifestyles of the Rich and Famous life.

The stories are strangely fascinating because of their very removal from Western mores and culture. Al Qassemi (and the unnamed people she gives credit for telling her these stories) lives in a world where the evil eye is taken very seriously, where women will do anything to get or keep a rich suitor, where dread of a second wife being taken is palpable, and a man can divorce his wife without discussion and without reason. It’s a very different place than the Western world, and those differences lend the stories a “What can possibly happen next?” urgency.

Al Qassemi does a nice job of distinguishing between different Arab cultures. To Westerners who consider Saudi strictures the rule for all of the Arabian Peninsula, this book could be an eye-opener. Not all women (in fact, none in this book) are forced to wear all-concealing female garb, not all are forbidden to drive, and not all are strict Muslims. The important role of Filipino workers in the Middle East was just one surprising bit of information Al Qassemi reveals. Finding these nuggets is entertaining.

Unfortunately the same cultural differences that drive interest in of this book could become wearying to those not immersed in Arab culture. The emphasis on marriage at any cost, hyper-focus on appearance (each story gets more derisive of women who don’t look “perfect” at all times), and genial acceptance of women as second in importance to men are anathema in current Euro-American culture, and as such these themes might not play well outside of Al Qassemi’s sphere.

Troublesome, too, is the construction of each story. This could be due to translation: There are sentences and paragraphs that are structurally awkward and cumbersome, but one can see the author’s intent is different. Perhaps a more facile translation, focusing on the spirit of the sentence rather than a word-for-word translation would clear up this issue. No story has a clear arc; most meander from point to point until they eventually trickle down to an end. This does back up the author’s statement that these stories come from personal narratives—anyone who has dealt with interviews will recognize the style—but doesn’t work in a novel—or even in a short story.

Black Book of Arabia is a snapshot into a world and lifestyle with which most Western readers are unfamiliar, and it has value in opening those doors, however briefly. With a more traditional story structure and clearer translation, it would be a stronger book.