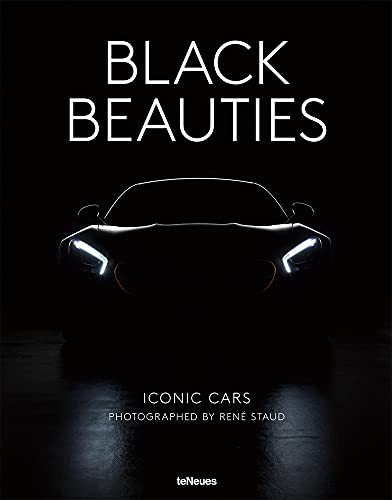 “[a] stylish and intelligent discussion of the intersection of transportation, aesthetics, and meaning.”

The black car can embody many meanings. An executive limousine in black symbolizes power, authority, and menace. A sports car in black can be a strange creature. A Ferrari  is usually painted in a blaze of red. An Aston Martin usually appears in stately silver. Black Beauties: Iconic Cars Photographed by René Staud, by René Staud showcases nearly 300 pages of iconic cars. With introductory texts by Jürgen Lewandowski and additional essays by a variety of experts, Black Beauties becomes an intellectual meditation on the color black. What is it about a black car that makes it so appealing? Essays from car designers to advertising executives to an ophthalmologist all weigh in. To be sure, Black Beauties is eye candy for gearheads, but it also a thoughtful exploration of the commonplace but controversial color.

On a more physical level, Black Beauties is a massive coffee table book, measuring 15 x x 11.8 inches and weighing 7.5 pounds. It could be its own coffee table. When it comes to high-quality photography books, teNeues goes full throttle. Chapter titles reveal different aspects of how the color black is perceived. These include Black Heritage, Black Elegance, Black Power, Black Legends, Black Eternity, and Black Universe. Essays come with titles like: “Paint It Black!,” “Black Is A Non-Color,” and “The Synthesis of Power.” (Since this is a bilingual edition, the latter essay has the German title of “Kraft Pur.” The photographs within these pages approach the economy of those two Teutonic syllables.)

Staud deserves credit for his eccentric selection of automobiles. The predictable models and marques are thoroughly represented. Since this is a German publisher and the book was printed in Italy, the German and Italian marques come close to over-representation. BMW, Mercedes-Benz, Ferrari, Lamborghini, Volkswagen, Audi, and Maybach get their share of the spotlight.

But there are oddball outliers, each presented with a beautiful black paint job. “Of course, not all legends can always fulfill every criterion. A Studebaker Avanti’s beauty is debatable, and a Monteverdi 375/4 is not particularly innovative,” Lewandowski states in the chapter “Black Legends.” The inclusion of the Studebaker Avanti is not the only model standing out. Staud also photographed rare beauties like the Skoda Popular Sport Monte Carlo, the Daimler Consort, and the Volvo PV544. Staud goes beyond the predictable brands plastered on bedroom walls and computer wallpapers.

The black paint job also adds a degree of elegance otherwise unseen on popular sports cars. The Ferrari Testarossa changes character, as does the Nash-Healey. The Opel Rekord C “Schwarze Witwe” rally car from 1967 is black with yellow rims, making it appear remarkably similar to the Green Hornet’s black sedan.

Staud uses a variety of backgrounds, from simple primary colors to situating cars in real places like garages and showrooms. He does this in combination with a varied camera angles and lighting strategies. One car could be barely visible beyond a simple silhouette, while another may stand at a rakish angle, its various textures (metal, leather, rubber) contrasting with each other.

At the end, Staud photographs other things besides cars, including a watch, a Les Paul guitar, and a bike. Black has a way of making anything look more exclusive and luxurious. No wonder Johnny Walker and Mountain Dew use the term “Black Label,” even if Mountain Dew’s marketing stunt comes across as farcical and mercenary.

Black Beauties is bold in its exploration of the color black, but it treads lightly in its politics. Mercedes limousines are mentioned as the conveyance chosen by a dictator to peacock before their subjects. The Maybach Exelero V12 Biturbo is described as a hot rod for Darth Vader. Perhaps it is the book’s German and Italian pedigree that make any mention of black SS uniforms and Mussolini’s Blackshirts problematic.

While the text is peppered with quotes about the color black, the infamous quote from Susan Sontag is not there.  She ended her essay “Fascinating Fascism” with the quote, “The color is black, the material is leather, the seduction is beauty, the justification is honesty, the aim is ecstasy, the fantasy is death.”

Black remains an alluring but also problematic color, associated with everything from extremist racist ideology to Black Lives Matter. Black Beauties seeks to emphasize the positive, but the absence of the color black’s notorious recent European history stands out. Despite this omission, Black Beauties is highly recommended reading for its stylish and intelligent discussion of the intersection of transportation, aesthetics, and meaning.