The Bitter and Sweet of Cherry Season: A Novel 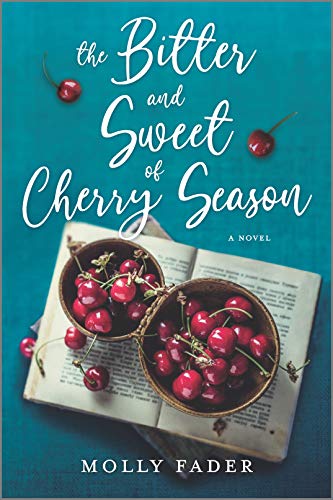 “Focusing on estrangement, abuse, forgiveness, and a chance for new beginnings, The Bitter and Sweet of Cherry Season is sure to tug at the heartstrings.”

Hope Wright and her ten-year-old daughter Jenny (aka Tink—shortened for the nickname "Tinkerbell") are fleeing their Missouri home to get away from Hope's abusive boyfriend, Daniel.

With their meager belongings and not much cash, Hope wonders if Canada is the place to go. Will they be safe there? She remembers her deceased mom telling her long ago about Orchard House, the family farm in northern Michigan where her aunt Peg resides. Can they go there and descend on Peg, an unfamiliar relative? But what other choice do they have?

They arrive at Peg's only to be greeted by a ferocious looking dog and a middle-aged woman standing on the stoop with a shotgun in her hands. Hungry and exhausted from their escape, Hope cannot decide whether to cry or collapse. She manages to shout out to Peg her identity, and after awhile, the ornery woman allows them entrance. Peg notices her estranged niece is sporting a black eye and split lip and something in her hardened heart will not allow her to turn the two away.

Both Hope and Tink want nothing more than a warm and safe place to sleep.
Surprised by their sudden appearance, Peg doesn't want to be aware of what has brought them to her. She believes they should remain separate; she doesn't want to know their business, and she doesn't want to disclose hers. However, curiosity stirs in her, especially as to why Tink refuses to speak. Could they both have been a part of something so terrifying to flee their home and come to her to hide out?

Feeling somewhat sentimental, Peg gives them access to her upstairs quarters, and after almost two days of slumber, Hope informs her they are will not be staying. She does not explain their presence, but Peg can easily imagine, seeing the bruises and haunted look on the faces of both Hope and Tink.

Not wanting to be a burden to her aunt, Hope offers Tink and her help in gathering the cherries as the season has begun. Hope needs something to take her mind off her problems and what better way than with physical labor?

Out in the orchard, Hope and Tink meet Able, who Hope believes is Peg’s hired help. Abel and Peg have been working hard to collect the fruit, and Peg is happy the job should go more swiftly. She is also surprised by the fortitude the two newcomers display with their labor. Though she doesn't show it, she is relieved and happy to have the extra workers so they can harvest the fruit before it can go bad.

Fearful at first of both Able and Nelson (Peg's beloved canine), Tink begins to relax and demonstrate her feisty and independent personality. Meanwhile, Hope, distrustful of Able soon discovers a gentleness in him and finds herself drawn to him. The relationship between her and Peg softens, and before long they open to each other, yet Peg holds a secret she cannot share with her niece.

Tink loves her new surroundings and wants to remain there permanently, though Hope is fearful Daniel will find them and bring trouble to Peg. When she finally discloses how dangerous he is, Peg and Able too, are adamant about keeping

them safe. Slowly Peg turns from her aloof and introverted ways to find happiness for the first time in a long time.

For so long, life has consisted only of Hope, Tink, and her mom, DeeDee, until DeeDee’s death. Tink, shy around others, never had any friends, so Hope wants change for them both. They are invited to Janice's—an old friend Hope does not remember being with the last time she was at the Orchard House—which was when she was four. They are hesitant to go, having mainly lived a sheltered life without much contact with others.

As Hope ponders why she has no memories of ever being there she reminisces about DeeDee, wondering what happened between the two sisters and how her life as well as Tink’s became so solitary:
"Hope wasn't sure what Peg was choosing to be along out there on the farm, all her memories tucked behind couches.

"Hope didn't want any of that for Tink. She didn't want it for herself. This was the hard work they needed to do. If anything in their life was going to change, they had to make it happen.

"'Everything is not okay, Tink,' Hope said, the truth unsugarcoated spilling from her lips. Tink's head spun toward her, and Hope felt light-headed. She squeezed her hands into fists and then let them go just so she could feel something. ’It hasn't been for a while. And it's not just about Daniel. It's about DeeDee and us and how we live. And you're right, we've got Peg now and Abel. School. And maybe—' she looked out at the house with the geraniums and the dog and the blonde woman she'd apparently celebrated her first birthday with '—some friends. I want to live a really big life, Tink. A happy one. And I think going into that house and making friends with people is part of that. It's part of being okay.'"

As mother and daughter force themselves to socialize, they discover how much fun they are having, making Hope determined to get Peg out of her shell and more involved with others.

Meanwhile, in the back of her mind is the thought of Daniel finding her, which scares her so much she wants to leave Peg’s—fearful not only for herself and Tink but for Peg, too. As much as she's come to love her new living quarters, and Peg, Nelson, and even Able, can she live with herself if her presence puts them in danger?

As disclosures are revealed, Hope learns the secrets of her past, and she is confused about how to proceed. Has her whole life been one lie?

This novel offers an in-depth look into the three main characters as Hope, Tink, and Peg give their point of view in which their fears, heartaches, and aspirations are brought to life. Focusing on estrangement, abuse, forgiveness, and a chance for new beginnings, The Bitter and Sweet of Cherry Season is sure to tug at the heartstrings.