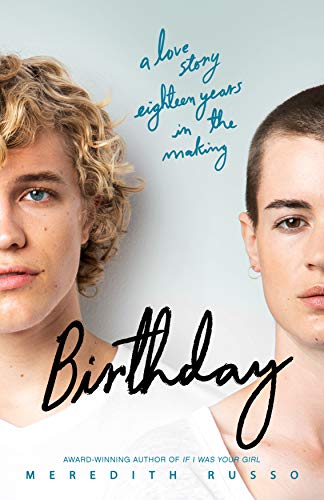 “Rucco really has done a superb job in illustrating the complexity of a young person coming to terms with being transgender and explaining how Morgan came to realise and accept his true gender rather than investing in the assumed gender that others around him perceived to be.”

Birthday is the beautiful, tender love story of Morgan and Eric. After a few pages, readers will be engrossed and after a few chapters, they will be pulled hook, line, and sinker into its plot, which is mapped out in alternating viewpoints between the two boys.

Morgan and Eric were born on the same day in the same hospital in a suburban town called Thebes in Tennessee. Their parents become friends during their births, and over the years it became the custom for both families to celebrate Morgan and Eric’s birthdays together. The book depicts their birthdays between the ages of 12 and 18.

Morgan’s mother died when he was 11. He was an only child. His father, the school football coach, wasn’t the most paternal and concentrated more on his coaching than caring for Morgan. They lived in a rundown trailer park.

Eric, on the other hand, came from a good background and was the youngest of three boys. His father owned a successful car showroom and provided well for his family, but his tyrannical ways spilt up the family. However, through all the dramas of their respective lives, Morgan and Eric remained the best of friends. They had a unique bond from birth and shared intuitive thoughts.

Just after puberty, Morgan began to change. People noticed that some of his mannerisms resembled those of a girl. Young people in particular assumed he was a “faggot” and targeted him for the remainder of his school years. Only Eric defended him. Only Eric cared. Morgan knew he wasn’t gay, but he also knew he didn’t care much for girls, either. The thing is, he felt he was a girl and these feelings intensified year after year. Eric knew that Morgan had a secret but waited for him to tell it in his own time. Eric had always seen a side to Morgan that eluded others. He had seen the female in him.

When Morgan was 17 he eventually told his father and Eric (separately) that he was transgender and seeking to undergo transitional treatment. Both were accepting. Eric sealed the announcement with lots of kisses. Kissing Morgan on the lips felt the most natural thing in the world to Eric because he saw and felt Morgan as female and not male. After this their romance blossomed, and they were not afraid to show the world or their families that they were in love.

The greatest strength of this novel is how Rucco tells the story of a young trans teenager and brings it to life with a clarity unseen in other novels. Rucco really has done a superb job in illustrating the complexity of a young person coming to terms with being transgender and explaining how Morgan came to realise and accept his true gender rather than investing in the assumed gender that others around him perceived to be. In doing so, Rucco allows Morgan’s gender identity to sound very natural. She depicts it as something that evolved throughout his life as opposed to it resulting through want or desire.

Despite Birthday being a good novel, it comes with a few mild irritations. It must be terribly difficult for parents with a terminal illness to realize they won’t live long enough to see their children grow up. Morgan’s mother was presented with this tribulation. On each of Morgan’s birthdays after her death, his father dutifully handed over a letter from his mother to mark the occasion. Most of the letters made uncomfortable reading for Morgan, especially since his mother lamented on not being around to see him grow up into a handsome young man and being deprived of the opportunity to meet his girlfriend and see him  get married. This may make readers wonder what comfort letters from deceased parents bring to their children. Perhaps this is a cynical view but one that readers may agree with after seeing how little comfort they brought to Morgan who felt more unworthy about his identity on each birthday upon receipt of these letters.

There appears to be a shortage of heroes in novels these days. Where are the men or women who aren’t afraid to place their heads above the parapet? Birthday contains several homophobic examples, which may make readers outside the US wonder if the country is saturated with intolerance of difference in others.

There is a particular scene where Morgan is confronted by a group of teenagers in a restaurant who abuse him with homophobic language. He remarks how some of the teachers from his school are present in the restaurant along with other adults. Nobody utters a word in his defense despite the loudness of the bullies. How nice it would have been for one of the teachers to have stood out from the crowd and make their mark in challenging the bigotry of the young men tormenting Morgan.

Morgan was extremely fortunate to have had somebody like Eric as a friend, especially since Eric, too, had grown up in the homophobic environment of Thebes. But from the moment Morgan told Eric that he was transgender, Eric started using the correct pronouns (she/her). These were seamlessly woven into the narrative which showed great understanding and maturity from Eric despite his previous lack of knowledge about transgender people. Readers, however, may consider the last handful of chapters rushed when comparing the build up to Morgan revealing his true identity and the automatic acceptance of those closest to him.

Those few observations and small criticisms aside, Birthday is both enjoyable and educational. It will make readers think more deeply about the emotional suffering of young trans people coming to terms with their true selves and the decisions they make in revealing their identities in sometimes hostile environments.