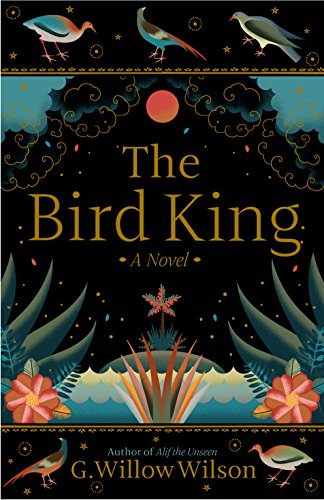 “The Bird King is a beautiful read, paying fine attention to the natural environment and the nuances of the characters’ interactions.”

G. Willow Wilson’s second novel takes place in the last days of the 15th century Reconquista, as the Muslim Emirate of Granada surrenders to the Catholic monarchs Ferdinand II of Aragon and Isabella I of Castile. Its protagonist, the sultan’s concubine Fatima, flees the court with her childhood friend Hassan when the terms of the surrender include giving Hassan up to the Holy Office of the Inquisition on the grounds that he is a sorcerer.

Hassan has a gift, which is to draw maps of places he’s never seen, maps that can shape reality—creating doors and other features where there are none, folding space to bring distant places closer. But while the reader might expect this to greatly simplify the characters’ escape, Wilson does not treat it as the “get out jail free” card it could easily have become; in fact, the sharp limits of his ability mean it plays a relatively minor role in the shape of the plot. Its major effect for much of the novel is to bring him under the fire of the Inquisition, rather than to solve his and Fatima’s problems.

Fatima herself is a prickly character, isolated by her enslaved status and prone to closing herself off from those around her. She frequently lashes out at allies with suspicion and anger, and for much of the novel she cannot even bring herself to voice her affection for Hassan—an affection that treads the boundary between platonic and romantic, as Hassan is gay, but they both experience jealousy over competing relationships. Their bond might best be viewed as romantic but asexual.

Although the writing is beautiful and the character interactions are sharply drawn, the structure of the plot is more diffuse than it might have been. The flight from Granada does not begin until more than a fifth of the way through the book; Hassan does not suggest fleeing to Qaf, the mythical island of the Bird King and ultimate destination of the story, until nearly the halfway point. A central threat reappears more than 250 pages after it was last seen; it has been present in the story in the interim, but in such disguised fashion that the impact is significantly diluted.

Furthermore, the Bird King as a symbol and goal is left far more implied than defined. In the final pages Fatima says,

It’s hard to escape the feeling that Wilson herself had difficulty articulating what the Bird King represents in this novel. The intended meaning might be clearer to those who are familiar with The Conference of the Birds, the 12th century Persian poem by Farid ud-Din Attar that inspired and shaped this book.

Fatima and Hassan have read the beginning of the poem, which concerns a group of birds flying in search of their absent king; throughout the novel they play a game of sorts where they make up stories about different kinds of bird. But when the jinn Vikram offers to tell Fatima how the poem ends, she stops him from doing so. While Vikram makes the excellent point that their own version of the story is as valid as the poet’s, leaving the latter version unspecified deprives the reader of some potentially useful context.

By contrast with Qaf and the Bird King, the religious and political tensions of 15th century Iberia are sharply drawn. Luz, the baroness who arrives in Granada with the Castilian delegation, expresses the paradoxical charity of evangelical Catholicism: she so devoutly wants to save the souls she believes are damned to hell that she will, out of love, torture those people in order to make them repent.

The Dominican monk Gwennec offers a contrasting perspective, while on the Muslim side of the story Hassan offers up regular prayers and Fatima can hardly be bothered. By presenting a range of opinions and levels of piety for both faiths, Wilson avoids the reductionist tendency to treat all members of a religion as being the same.

The Bird King is a beautiful read, paying fine attention to the natural environment and the nuances of the characters’ interactions. Some authors who take up prose fiction after working in comics neglect the strengths of the medium—poetic description, physical experience, and interiority—but not Wilson.