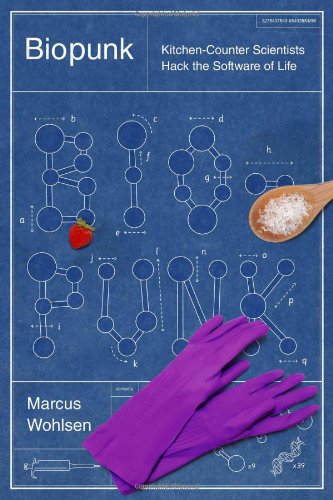 In Marcus Wohlsen’s excellent first book, biopunks are biological hackers or tinkerers hoping to do the same thing that large biotech firms do, only do it more openly and less expensively. Biopunks may never cure cancer but their idealism and critique of the science establishment may have a lasting impact on the future of biotechnology. Biopunk introduces some of the individuals involved in biohacking, and Marcus tells this story in a journalistic style, moving from person to person and from topic to topic in a manner reminiscent of James Gleick’s The Information. A reader will come away amazed, gaining a broad view of Biopunk and what it may mean for the future. But note that there is a dark side, too.

The genetic backstory is thankfully provided for context. Watson, Crick, and Franklin isolated DNA in 1953. Genes were first spliced in the 1970s by Herbert Boyer and Stanley, who then co-founded Genentech, cloned human insulin, and received the first ever patent on a recombinant DNA technique. By 1980 genetically engineered living things were being patented, and today biotech is a billion dollar industry.

Looking back at the prehistory of genetic tinkering, the crossbreeding of plants may be as old as farming itself. Cross a grapefruit and a tangerine and you get a tangelo. The pace of crossbreeding quickened though in the 1990s with Monsanto’s introduction of patented, genetically engineered seeds. These seeds were modified for their resistance to pests and herbicides. Selling these seeds introduced a new business model for agriculture to the end result that farmers did not actually own the seeds they bought. These seeds were intellectual property: something licensed that remained the property of Monsanto.

Monsanto apparently did not think things through about what could go wrong licensing seeds to farmers who choose not to follow the IP business model. In 2000, in Gurjarat province in India, the Indian company Navbharat sold Monsanto cottonseeds as their own, unlicensed and at a lower price. In 2001, a bollworm outbreak ravaged Gurjarat except for crops grown from Navbharat’s seeds. Monsanto realized that something was wrong, and at their behest the Indian government attempted to crack down. The crops were ordered destroyed, and Navbharat was prevented from continued selling. Not taken into account was that the Indian authorities did not have the infrastructure to actually destroy the crops nor prevent farmers from saving stealth seeds from the bolls for their next season. Law, when in conflict with harsh reality sometimes does bend to that reality. In May 2010, U.S. law reversed itself and genes were deemed laws of nature and not patentable.

Genes are the root cause for many diseases. When the virus H1N1’s gene was sequenced by the CDC (The U.S. Center for Disease Control and Prevention) in 2009, the disease’s sequence was kept secret. Protecting information to prevent terrorists from creating life-threatening diseases also limits the creation and dissemination of low cost genetic tests for those very same diseases.

For innovators, ideas don’t just come out of bureaucracies. Biohackers as innovators have an anti big-science romanticism about their work. They believe that if you work for an institution, you just won’t be as creative or work as hard as you would on your own. Their belief is that the results of DNA sequencing should be open, free to all, like open source software. If sequences were open source then biohackers would be able to provide cheaper, faster, and more accurate ways to analyze DNA, to do good.

The key to success for this model is the reduction of costs, which provides individuals access to resources that for now only institutions can afford. Low cost, simple tools and techniques created by the amateur community in turn lowers infrastructure costs, and makes biotech much more user-friendly. Imagine the raw curiosity of genetic research that can be unleashed when experiments can be built by anyone, on a tabletop, with low-cost tools and supplies.

Biohacking groups have unfamiliar names such as Livly, BioCurious, 23andMe, Clotho, Mr. Gene, bioCad, BossLab, openwetware, openPCR, DIYbio, Genspace, and biofab. But any one of these may achieve the success of a Microsoft, Google, or Facebook.

Reduced cost is an indicator of deeper changes to come. Lower costs in gene sequencing can open tremendous opportunities in comparative genomics, fighting crime, and providing insight into obesity, mental illness, and disease. These opportunities are not so much new science as a new way of doing science. Consider the impact on society when the cell phone went from a luxury to when anyone could own one.

One of the critical tools of biohacking is the PCR (Polymerase Chain Reaction), a thermally cycling chamber that enables DNA to replicate. The PCR was invented in 1983 and is one of the fundamental achievements that allowed genetic engineering to proceed on to industrial scale operation. OpenPCR.org sells a PCR that is controlled by a device called Arduino, and the Arduino itself is an open-source electronics prototyping platform equivalent to Lego’s for adults. The lowered cost of building a PCR may soon come down even more to where it can be mass-produced for developing-world disease diagnostics kits. The LavaAmp PCR holds this potential.

Where do biohackers come from? From school, of course. iGem, an acronym for International Genetic Engineering Machine is an academic competition that has both college and high school divisions. The competition is based on use of a kit called the BioBrick, a standardized biological kit. The first competition in 2004 was hosted at MIT and had only five teams competing. In 2010, there were 130 teams competing from around the world.

Bioengineering graduates have the knowledge to set up home biotech labs, purchasing equipment inexpensively online from shops like EBay. The author introduces us to Kay Aull, who graduated from MIT’s Bioengineering program and built a hemochromatosis lab in her apartment after her father was diagnosed with a rare genetic disorder. She did this to determine the risk of contracting the disease herself.

We also meet Meredith Patterson who in her San Francisco home lab created a low cost test for melamine, a poisonous adulterant recently found as in imported milk. She created a melamine test by splicing a glow-in-the-dark jellyfish gene into the bacteria that turns milk into yogurt, with a biochemical sensor that detects melamine.

There is a big difference between doing lab work for oneself and offering medical services to others. 23andMe has recently priced their gene analysis kit for $199 but must promote it as an “educational,” not as a medical diagnostic. There was an initial plan to sell gene-sequencing kits at Walgreens before concerns over whether genetic tests were to be considered medical devices or not. If these kits were medical devices then they would need to be regulated by the FDA, and the labs that process the kits would have to meet state and federal standards. When genetic testing is not regulated, or is under-regulated, then the business of genetic testing becomes an open playing fields for the ethically challenged, those who may offer faulty diagnostics or over-charge health insurance (as in the recent bone marrow registry scam in Massachusetts and New Hampshire), simply because they can.

The greatest impact for positive change may not be in the U.S but in Third World countries in providing low cost diagnostic kits. For example, the current form of testing for Chagas, a parasitic disease, is by detection of antibodies in the human immune system. The testing methodology today for diseases like this is inflexible as it requires a separate arsenal of chemicals for each germ or parasite tested. Biohackers offer a possibility for a more flexible (and low cost) form of diagnostic by testing for the genetic signature of germs and parasites of whatever kind.

Another path genetic research takes is synthesis, constructing DNA letter by letter. Synthesis is not as easy or as low cost as DNA analysis as it requires greater knowledge and progresses at a slower rate. Assembly of DNA is just the first step, the next and more difficult step is in gene regulation, figuring out how cells determine which genes to turn on and off, and for how long. Synthetic biologists do not as yet have the ability to model highly complex biosystems when genetic parts are stitched together, and it can take years to test even one property.

One goal for DNA synthesis is to create microorganisms that convert cellulose to biofuel, currently being undertaken by Amyris. Synthesis can also be used in the treatment of disease, for example the creation of synthetic artemisinin for the treatment of malaria. Synthesis removes the dependence on limited natural sources for the manufacture of drugs. Another use that is in practice today is manipulating the body’s own immune system to kill cancer cells. Avastin is doing just that, and is used to treat colon cancer, however it costs $100,000 per year per patient.

Research labs commonly outsource their mechanical labor to one-stop DNA synthesis shops for building gene sequences, and these shops are driving down costs through innovation and competition. Synthesis shops are self-policing, having security flags to identify orders of sequences known to be dangerous, like smallpox. Self-policing has limits though, it doesn’t mean that someone working there couldn’t synthesis something dangerous for themselves, as was believed to have been done by Bruce Ivins, who worked at the Army’s Biodefense Lab. Ivins later committed suicide after being accused by the FBI of sending Anthrax through the mail in 2001.

It should be obvious that not all biohackers are terrorists but authorities can easily overreact as they did when artist and biohacker Steve Kurtz was accused of bioterrorism in 2004. Although charged under the Patriot, he was eventually convicted of the lesser charge of mail fraud (in acquiring biological materials) and was sentenced to 20 years. His conviction was eventually overturned in 2008 when a judge deemed the evidence of his criminality to be insufficient. The FBI also has begun to educate itself about the biohacker community, and participates in conferences on synthetic biology. The FBI set up a booth at the “Outlaw Biology?” conference in 2010 to talk about lab safety, dual-use, and outreach.

Biopunk might be the first but is certainly not the last word on the biohacker community, but as an early entry into the field it certainly raises far more questions than provides answers. One worrisome question is in the apparent lack of concern over the difference between science and engineering. What is lost when engineering is substituted for science? This question was first asked in an article in Microbiology and Molecular Biological Reviews, in June 2004, “A New Biology for a New Century” by Carl R. Woese. In his article, Woese fears that a “society that permits biology to become an engineering discipline that allows that science to slip into the role of changing the living world without trying to understand it, is a danger to itself.”

Another question is about the apparent lack of regulation. As more people find their way into biohacking that standards and ethics, absent strict regulation may open the door to some pretty grim consequences. Consider the possibility of lapses over safety, contamination, testing, or of simple restraint, whether of greed or in playing God. What if just anyone were able to build their own nuclear reactor? Would the world attain low cost energy or just see an unending spread of radioactivity from one accident to the next?

One last note: Although written in a non-academic style with no need for any knowledge of science and engineering to enjoy, this book is best read alongside an Internet connection to look up unfamiliar terms, individuals, and organizations and to follow the links to see where they take you. Illuminating.