Billy Mitchell's War with the Navy: The Interwar Rivalry Over Air Power 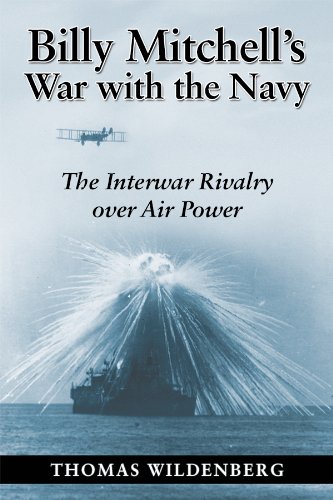 “This book is rich in detail not only about Billy Mitchell, but also about the many steps taken to finally bring a third military arm into existence. Billy Mitchell’s War with the Navy: The Interwar Rivalry Over Air Power is fascinating . . .”

William “Billy” Mitchell’s military life began in 1898 when the United States declared war with Spain. He remained a military man until his court martial and resignation from the Army in 1926.

Early in his career he impressed his superiors and while in the Signal Corps was sent to Alaska on assignment. Upon his return, he went to Fort Leavenworth, Kansas where he worked on the military use of balloons. His association with the head of the Signal School proved invaluable as his interest and participation in aviation took flight.

In January 1917, Mitchell was tapped by the War Department as an aeronautical observer in Europe. The reasons for his selection are unclear, but historical lore indicates it may have had to do with his outspoken criticism of the Aviation Section and its preparations for war. Regardless, in March of 1917 he left for France where he met with the American Ambassador upon has arrival in April of 1917.

During his time in France his passion for aeronautics in the military began to grow. His reputation for arrogance and unprecedented demands quickly grew with his passion to know everything he could about this burgeoning activity. It was during this time that he began to form his opinion that any air squadron should be attached to ground troops. He was convinced that the tactical use of aviation during wartime would be best used in an offensive, not defensive position.

It cannot be denied that Mitchell quickly became one of the most experienced aviators in this new and growing aviation action, and he had little patience for officers who came into positions of power with little or no flying background. As his ego grew, so did his demeaning attitude toward these men, often referring to them as “interlopers” and “carpetbaggers.” His behavior resulted in him quickly being replaced from command of the Air Service in the Zone of Advance and assigned to command the Air Service components of the I Corps, a move that placed him under disciplinary control of the I Corps Air Service commander.

It became apparent early on that Billy Mitchell was a man who spoke his mind regardless of the ranks of those he was criticizing. This behavior would grow and expand exponentially as his passion for his ideas and goals for an independent Air Corps grew.

Mitchell’s lack of management skills and his inclination for defiance as well as the fact that many considered him an outsider because he did not graduate from West Point, often worked against him in the eyes of his superiors. These facts, however, did not forestall his goal of establishing an independent military wing for the Air Service similar to what he had seen in the British model during World War I.

During this time of development, there were two distinct sides in the argument: the airmen who stood with Mitchell and supported the growth of aviation, and those (mostly non-flyers) who saw the airplane as a tool of war and nothing more.

As the argument grew, the focus began to turn to coastline defense and where that responsibility fell: with the Army or with the Navy. Mitchell’s belief definitely sided with the Army, and he began his war with the Navy. It was at this time that Mitchell proposed a unified air force called the Air Service. It goes without saying that he saw himself as the head of this service.

As politics entered the discussion, Mitchell was called before the Senate Committee on Military Affairs at which time he attacked the Navy on the issue of coastal defense. This was just one of many attacks he would make against the Navy.  In 1919 two senators each proposed bills—one that all aviation affairs be in a department of aeronautics; the other proposed a regular air force. Several high-ranking officers supported the legislation while the Menoher Board concluded that both the Army and Navy respectively should control their own arms of aviation. Shortly thereafter, a Military Affairs Committed convened and called Mitchell to testify. He took advantage of this opportunity to again attack the Navy.

Within this book, there is little said about Mitchell’s private life, but there is discussion about his love of an extravagance life style and excessive drinking. This led to his divorce from his first wife. He then married a wealthy socialite and remained married to her until his death. His extravagance and his drinking did not stop, although the second marriage did not seem to be adversely affected.

Wildenberg writes in great detail about the various testimonies Mitchell had with political committees and military boards, and with each he increased his attack on the Navy. His focus began to narrow to battleships, with Mitchell declaring the battleship all but obsolete as a means of warfare defense. Through these many testimonies, however, his rhetoric became more negative and oftentimes misleading if not downright lying to make his point.

Insubordination and disobeying the rules were not beyond his reach either. He was instrumental is setting up a series of tests to establish the superiority of an air force over the Navy. These tests included bombing of older Navy ships that were identified for scrap. The chapter in the book titled “Dreadnoughts Under Fire” provides exceptional detail about tests made on several of these ships, including the cruiser Frankfurt and the battleship Ostfriesland and how Mitchell manipulated the tests and the aftermath of publicity to his own advantage.

Further experiments off the Virginia coast provided more opportunities for Mitchell to design specific activities intended to show the superiority of air defense over Navy ships. The fact that in all of these tests the ships were old, anchored, and the tests we conducted in perfect weather was a fact that escaped Mitchell in his reports. Often these tests were littered with disregard for the rules when it suited Mitchell’s goals.

Mitchell’s disregard for the rules earned him the anger of a long list of naval airmen. This resulted in reports to the Secretary of War with charges of disobedience. To Mitchell’s advantage, however, was the publicity that he encouraged and sought. This publicity often set the stage to further enhance Mitchell’s arrogance, and proved often to be to his advantage when dealing with both politicians and the military.

In the chapter “Racing and Record Setting” Mr. Wildenberg discusses the role that air racing played in the ongoing competition between the Army and the Navy, and sheds light on Mitchell’s role in these competitions. An interesting part of this chapter is the details about the various planes and their constructions. And yet again, there is Mitchell’s strong competitive streak in participating in these races and his grab for the limelight that came with them. The importance of these races to the development and growth of aircraft cannot be disputed and this important chapter explains how these races assisted in that development.

Although Billy Mitchell’s arrogance continued to get in his way as he fought for an independent military air service, in hindsight it is difficult to fault him entirely. His insight into the need for such a military arm cannot be argued. As he continued his fight, however, it became apparent to those in command that he was stepping very close to the line, and when he stepped over it there was no alternative but to charge him with insubordination and put him before a court martial tribunal.

Mitchell expected this to happen, and although the trial lasted over seven weeks, the conviction was guilty as charged. Originally he was to be suspended from his rank, command, and duty as colonel, and he was to forfeit his pay for five years. President Coolidge changed the sentence to “. . . half-pay plus the full subsistence allowance to which Mitchell was entitled.”

The sentence came as no surprise, and on February 1, 1926, Billy Mitchell resigned from the Army. The irony of this was that he quickly began a speaking tour than earned him $40,000, which in the long run was more than he would have earned had he remained in the Army, and he was free to speak his mind.

Just prior to Mitchell’s conviction, the government and military went on to reject the establishment of a department of aeronautics as well as a separate air force. It was not long however, that the public screamed for air service reform, and the Military Affairs Committee considered

“. . . three distinct proposals concerning the organization of military aviation: a department of national defense, with three equal branches for the air, sea, and land; a department of air that would set up a third defense agency, making the Air Service and Air Corps within the Army; and the establishment of an Army Air Corps, somewhat analogous to the Marine Corps in the Navy Department.”

A conference committee finally worked out the details of the “Air Corps Act,” and the measure was signed into law on July 2, 1926. The discussion regarding the steps to establish this act, and the results, go far beyond the discussion of Billy Mitchell, but the role he playing in making this happen is clear.

This book is rich in detail not only about Billy Mitchell, but also about the many steps taken to finally bring a third military arm into existence. Billy Mitchell’s War with the Navy: The Interwar Rivalry Over Air Power is fascinating and should be required reading for anyone interested in the military history of the United States.