Billy (the Kid): A Novel 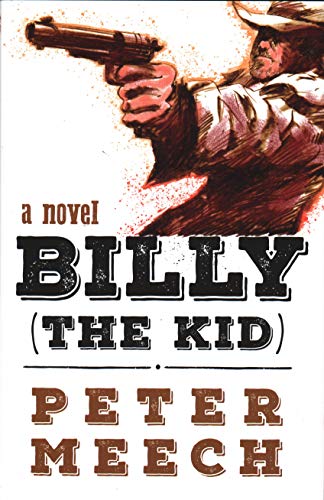 “Meech’s story may be a fiction, but it’s told with charm, wit, a smattering of bloody realism, some of the longest sentences this side of Robinson Crusoe, and a complete lack of quotation marks. It’s also thoroughly enjoyable.”

Billy McCarty is a retired dentist living in Prohibition-era Pueblo, Colorado—or is he? If asked, most of the residents, with the exception of widow Grace O’Bannion, will say he’s used to be Billy the Kid. Grace thinks Billy simply has a vivid imagination.

So many books and movies have been made about outlaw Billy that Dr. McCarty’s intends to tell the truth of his so-called demise by writing his autobiography, over which he toils nightly in his room.

According to Billy, Pat Garrett shot someone else, said it was Billy the Kid, and he and the real Billy split the reward money, with Billy then studying to be a dentist and moving to Pueblo to ply his trade.

Lately, Billy’s writing has been interrupted by his interest in the Widow O’Bannion, as well as his worry over a truant teenager and the boy’s father, an out-of-work farmer involved with a local bootlegger.

When Billy’s old friend, Charlie Peck, comes to town to open a speakeasy, it sparks more problems. Stokes, the local bootlegger, had a monopoly on speakeasies in Pueblo, and now Charlie’s cutting in on his business.

Stokes retaliates by sending the sheriff to raid Charlie’s club.

“Peck asked the sheriff how often he planned to conduct the raids.

The sheriff took a grave swallow of whiskey. Every night, he said.

Pecl swished some bills off a roll.

Once a week, the sheriff said.

More bills floated onto the counter.

Once a month, the sheriff said.

Another layer of bills floated down and covered the first.

Once a month and a warning, the sheriff said.

The sheriff glanced at Peck with a raised eyebrow. That’s where I drink.”

And that’s how it stands. Trouble is surely brewing. And soon.

Things aren’t going to get better. In fact, they’re certain to get worse, and whether Billy likes it or not, it looks as if he’s going to have to come out of retirement to save the day—or as much of it as he can.

It may not be High Noon in Pueblo, but there will be some bodies lying around before the sun goes down.

Billy lowered his gaze. I have to go, Grace. His shoulders heaved. He could not look at her.

She crossed over to where he was standing. What you’re doing is noble, she said and pressed his hand.

The more noble, the more foolhardy, Billy said, and strode past her into the hallway.”

It’s a well-worn entertainment plot device, certainly a cliché—the retired gunslinger once more breaking out his guns in order to right a terrible wrong while at the same time trying to steer his young protégé from following in his footsteps.

Peter Meech’s Dr. McCarty does well on both counts, as well as drawing on the rumors that Billy survived being shot by Pat Garrett so that it’s difficult to tell who really believes Billy is who he says and who doesn’t.

As late as 1948, there were still men claiming to be Billy McCarty, aka William Bonney, aka Billy the Kid, but even in 2004, DNA has not proven they were. Then again, it hasn’t proven they weren’t.

Meech’s story may be a fiction, but it’s told with charm, wit, a smattering of bloody realism, some of the longest sentences this side of Robinson Crusoe, and a complete lack of quotation marks. It’s also thoroughly enjoyable.

Imposter or not, Dr. McCarty is charming and smart, and his shy courting of the Widow O’Bannion, as well as the philosophies he teaches young Tommy as he tries to steer the boy into the paths of lawfulness, are delightful and entertaining.

Whether the reader is a Western fan, or simply likes a good “What if?” story, teetering on very fanciful fiction, Billy (the Kid) will fill the bill.