Billionaires & Ballot Bandits: How to Steal an Election in 9 Easy Steps 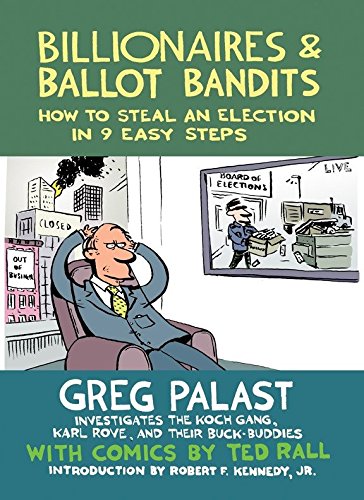 “Billionaires & Ballot Bandits is impartial—the corruption walks both sides of the aisle, and Greg Palast makes no effort to hide this.”

The ultimate triumph of Watergate was that “the system worked!” The streets erupted as it was proven to every citizen in this great country that the Constitution of The United States of America was indeed strong enough to protect its citizens from criminals.

The mentality of the men behind what has come to be known as “The Watergate Scandal” held their own skewed ideas about protecting America. According to them, America was under attack from radicals everywhere. The general logic behind their thinking was that their team had to win in order to preserve America. No one else could save America.

It was up to them.

Behind the President, the plumbers, G. Gordon Liddy and the lawyers was an organization called The Committee to Reelect the President. CREEP for short. As we know, the organization fell due to the diligence of a couple of newspaper reporters.

But the mentality that assembled CREEP and the venality that justified its existence trickled down to a man sitting in the data entry office. He was a wizard at information and had a strong grasp on the possible uses of something brand new at the time, a computer. He understood the importance of lists and how to use them. He went on to make millions in the mail order business.

His name is Karl Rove.

Rove’s presence on CREEP is just one of a million amazing facts that fly by as you read Billionaires & Ballot Bandits: How to Steal an Election in 9 Easy Steps.

Step by step the book dissects how the ultra-rich have co-opted the American Political system. Author Greg Palast is an investigative journalist who has worked with and for the best in the business. He has written for Harpers, Rolling Stone, and the Nation. Working with artist Ted Rall and featuring a heartfelt and informative forward by Robert F. Kennedy Jr., Mr. Palast documents the disappearance of millions of votes from the American political system. He does so with humor, honesty, and gusto.

As he relates certain stories you can feel him almost scream from the page in stunned disbelief “How the hell is this happening?” No one in the American Political system escapes his pen. According to his research both Clintons, both Bushes, Obama, Gore, Gingrich, Dole, McCain, and almost every person near the top has committed acts that are at least borderline felonies.

To support his multiple accusations of federal improprieties, Mr. Palast provides clear and easy to follow documentation for every incident. As well, he makes sure that various points are tied together chronologically. Nothing pops up out of the blue without context.

While some will dismiss what he writes as liberal and twisted, he is has no favorite among his subjects. Billionaires & Ballot Bandits is impartial—the corruption walks both sides of the aisle, and Greg Palast makes no effort to hide this.

Most of the time, Mr. Palast follows the simple rule of Watergate journalism: Follow the money. He ties this into the rise of politicians such as Gingrich or Obama from nearly nowhere, so we see how careers are made.

How did men like these, as well as the Clintons and others, move to the front of the political arena? Rich people liked them and gave them money. Lots of it.

And we aren’t talking about people who have a measly hundred million. Mr. Palast is talking about people like the Koch Brothers who each have $20 billion at their disposal. There is Penny Pritzker, estimated to be worth $1.8 billion—and that’s just the money they admit to.

As Mr. Palast demonstrates time and time again, these ultra-rich people have no moral or ethical concern when it comes to doing exactly what they want for themselves. None of them have the deluded “Save America” mentality of those who formed CREEP.

Still, there are quiet moments when politicians exhibit backbone. Such as when Obama and H. Clinton quietly corner a member of this elite club and, despite his riches, essentially move him out of the game after he does something so low, so despicable, so selfish you can’t believe the law allows such a thing to occur.

As important as the money and political names are, they are central to the book’s theme of the repeated instances of voter suppression. This is a concept that was virtually non-existent prior to 1994. Since those who have the money couldn’t win fairly they invented a pretend problem, sold it to the public and are now reaping massive benefits.

Mr. Palast thoroughly defines the many different ways to steal votes. Public quotes and actions from Rove and others back up his assertions. In the center of the book, illustrator and artist Ted Rall reinforces Greg Palast’s hard research with a 48-page graphic novel that serves to highlight essential points in the book.

Like Mr. Palast, Mr. Rall never leaves his sense of humor behind. He opens his section with a cover that mimics one of the most important comic book lines in American History, EC Comics. While EC were not the only books targeted by a Senate Sub-Committee on Juvenile Delinquency in the fifties, their owner, William M. Gaines, was the only publisher who showed up to defend his work and his right to publish these now classic books.

Featuring EC as he does is wonderful nod to a forgotten patriot and businessman from the past who nearly lost it all when he stood up to the absurdity of his government. The artist’s choice also subtly acknowledges that if we don’t watch our government, it can leave us in a heartbeat if we allow the powerful to take it over.

What Mr. Palast writes of is far more dangerous than Watergate. Billionaires & Ballot Bandits is a book to read and pass on to anyone you can. It is a marvel of investigative journalism.