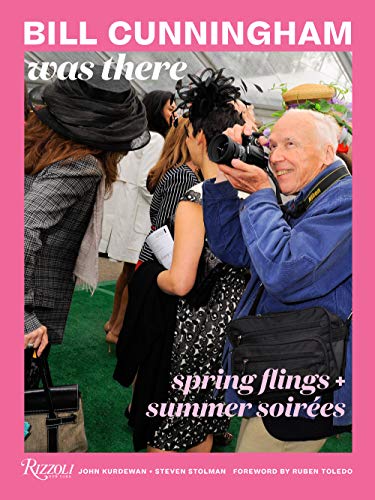 The unique aspects of Bill Cunningham Was There is that he can easily be considered in any or all of the categories that comprise the genre of photography: designer, muse, and personality. He was also a true gentleman, a fashion savant, and universally respected.

Cunningham said: “Fashion is a mirror, reflecting the culture.”

The authors provide the seasoned fashion follower with an almost nostalgic look back at a man who was as much a part of fashion and so-called society as those he photographed, although he eschewed all the pomp and circumstance of his subjects and the events he attended.

If the reader was a follower of Bill Cunningham in The New York Times, then they will undoubtedly get lost in what once was visually recorded by Cunningham. If you encountered him on any level, you will be reminded that fashion, as a cultural facet of life, is just not the same without him. Always smiling, always gliding by on his trusty bicycle, and if you knew him better, always a story to tell or a morsel of fashion ephemera that made him one of the great fashion scholars of his generation.

Bill Cunningham Was There is photocentric, featuring some of the grandest and outrageous Spring social events of the day as well as a very select group of people that he considered to be worth photographing, even some that he found to be consistent subjects that he befriended. What the authors also reveal is his encyclopedic knowledge of fashion, his work ethic, and the history behind so many images at these grandiose events. Cunningham was not just any photographer taking pretty pictures as his knowledge and raison d’être was never based on the editorial or portrait aspects of photography. Photography was his social commentary and his modus operandi to express his endless love for his first love: fashion.

Bill Cunningham Was There is a must have for one’s fashion library, serving as a reminder of the glory of it all.