The Big Squeeze: A Social and Political History of the Controversial Mammogram 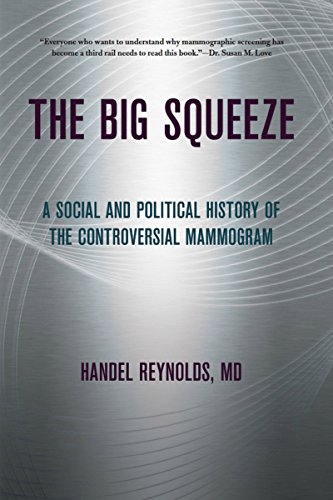 “. . . a good case study of what happens . . . when politics and science use each other and the media to advance their own agendas rather than public policy.”

Not so long ago, in 2009, in the middle of the debate over the Affordable Care Act, the United States Preventive Services Task Force (USPSTF) published new breast cancer screening guidelines calling for more vigilance with respect to the use of the mammogram among women aged 40–49 years.

The timing could not have been worse.

Almost immediately, some Republicans were using the guidelines as an example of health care rationing or in colloquial terms “pulling the plug on granny.” Unsurprisingly, Secretary of Health and Human Services, Kathleen Sebelius, proceeded to disavow the Task Force’s recommendations within two days of the report’s publication.

This incident is one of many presented and analyzed by Handel Reynolds in his astute short book The Big Squeeze, which traces the social and political history of the mammogram in the United States. This book is strongly recommend to every woman age 40 or older.

Diagnostic mammography refers to having a mammogram done to confirm or refute a suspicion.

The situation represents, as the author notes: “a classic ‘glass half full / glass half empty’ paradox. On the one hand, groups such as the American Cancer Society and the American College of Radiology argued that since there was no scientific proof that screening in women under fifty was actually harmful, and since there was an abundance of evidence that screening was highly effective in women over fifty, screening younger women should be presumed effective. . . . On the other hand, groups such as the National Cancer Institute and the U.S. Preventive Services Task Force took the approach that if screening had not been proven effective, it must be considered ineffective.”

Disadvantages of mammography for the individual woman include radiation exposure and/or a high possibility for both overdiagnosis and overtreatment. Overdiagnosis occurs when the cancer diagnosed ends up regressing or develops extremely slowly. Breast cancer regression is especially likely to occur in the case of the so-called DCIS, or stage 0, when cancer cells are confined to the interior of the milk ducts.

Women diagnosed with DCIS (between 20 to 25 per cent of all new breast cancer cases) will typically undergo lumpectomy, many will have radiation therapy, and one third will end up submitting themselves to mastectomy. This is a classical example of overtreatment.

Following a less radical approach with “a reduced role for biopsy . . . and an expanded role for short-term follow-up mammography” is more effective since DCIS will often disappear after a certain period of time or never grow into something dangerous.

For the health care system screening mammography is not particularly cost effective, yet this argument is hardly ever made explicitly—not even by Handel Reynolds—presumably for fear of being accused of cynicism.

Yet what tends to get lost in the heated debates is that breast cancer was never really a major cause of death. Back in 1990, the U.S. breast cancer rate was 33.3 per 100,000, that is to say 0.03%. In 2007 it had been reduced to 22.9 per 100,000, that is to say 0.02%. No doubt this reduction is significant and deserves to be celebrated, but it is not entirely or even primarily due to screening mammography. The availability of better treatments is apparently more important.

In any case, if all U.S. states were to follow the example of Connecticut, which in 2006 enacted a law “to mandate insurance coverage for screening breast ultrasound for women with dense breast tissue,” this would swell the health care costs for breast cancer screening from currently $4.8 billion to $7.7 billion yearly.

Given the extent of both false negatives and false positives for both types of screening, the judiciousness of such a move deserves further scrutiny.

At a more conceptual level, The Big Squeeze: A Social and Political History of the Controversial Mammogram represents a good case study of what happens in the field of health and risk when politics and science use each other and the media to advance their own agendas rather than public policy.