The Big Payback: The History of the Business of Hip-Hop 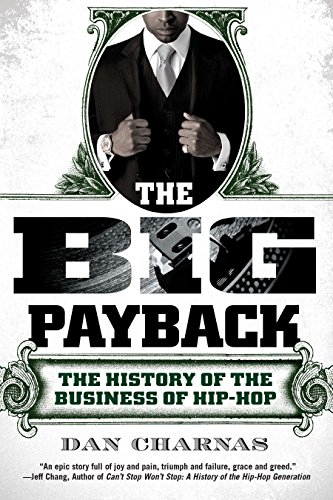 Like, OMG, Tiffy. Did you, like, totally see what happened last night on “The Big Payback”? Well, Sylvia and Joe hooked up, even though she left him because he took all that money from a mafia guy. Then Rick and Russell finally decided to go into business together, and they threw a party to cap off the deal. It was off the chain! But then this new guy from Washington, DC, like, crashed and totally tried to take over the party. He brought all this Cristal and everything. It was, like, totally awesome, right?

OK, so The Big Payback is NOT a soap opera. But like most behind-the-scenes stories from the music business, it would make a good one. It has everything: violence, back-stabbing, romance, and enough rags to riches stories to keep Hollywood busy for years.

Author Dan Charnas saves it from being overly sensational (because when would that happen in the rap world?) by sticking to the facts. If a character makes a bad decision, Charnas points out the error and why it was probably not the best choice, instead of simply glorifying whatever musical/business talents made said character famous in the first place.

Folks who grew up in the Bronx in the late 1970s and 1980s, living through the beginnings of the b-boy culture, will enjoy Charnas’s book as a trip down memory lane. For those of us who were raised in White (reviewer’s capitalization) Midwest suburbia, we get to learn the whys of the whats. The culture is completely different from what most of us are familiar with, and yet Charnas does a good job setting the scene so everyone feels like they were at all the hot spots like Disco Fever.

Some big names float around the book. Some stay for the duration (Russell Simmons, Rick Rubin), while others flare briefly for a moment and then fade, either through rivalry on the charts or rivalry on the streets (Tupak). For his part, Charnas interviewed over 300 people in addition to perusing court documents (there were many), websites, and other forms of correspondence. This 600+ page tome is a truly comprehensive study of not just the music, but also the business practices that give it life.

Having worked at Profile records (home to Run DMC, among others), Charnas has experiences and information that was formerly unavailable to outsiders. Interestingly, Charnas does not disclose his connections in the body of his work. Only by reading the back book flap would a reader learn about the author’s beginnings in the world of hip-hop. Maybe the author was simply trying to keep himself out of the story’s way, but it does seem a little weird that Charnas did not at least admit to his past to some extent in the book.

It is somewhat disappointing that what started as an honest expression of an underground culture has developed into a misogynistic, self-centered industry where status is determined, not by talent, but by what an artist owns (bling anyone?). This is, of course, a broad stereotype. There are still artists interested in the music and Charnas covers them all—the good, the bad, and the really, really successful.