The Big Hurt: A Memoir 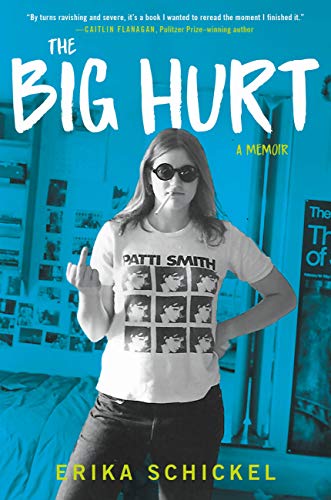 In her haunting memoir The Big Hurt, Erika Schickel accomplishes something quite remarkable—by sharing many of the most specific and intimate details of her life, she conveys an everywoman’s universality of experience that will speak, in some way, to each of her readers.

This book is mesmerizing on many levels. It is a travelogue, ranging in locations from Los Angeles to New York to Colorado to Santa Fe to London to Massachusetts and, yes, even including several moments in Fresno.

The Big Hurt is also a time capsule, with tales of the heady, freewheeling years of the ’70s and ’80s along with glimpses into Schickel’s family history in the ’50s and ’60s and even earlier.

Schickel is the daughter of renowned film critic Richard Schickel and novelist Julia Whedon. Her parents’ marriage was not a happy one, and their divorce was ugly. Her relationship with each of her parents was at times fraught with emotional trauma.

Schickel is unsparing in her narration, of others and of herself. She begins her book with the genesis of an obsessive affair she had with crime novelist Sam Spade (not his real name) that shattered her marriage and her family.

The images of this relationship are viscerally unsettling from the opening pages of The Big Hurt. Schickel sets out the all-encompassing destruction that will result from this liaison:

“Rather than tell the truth about my past, it would be easier for me to sacrifice my reputation, my career, my marriage, my closest friendships, my children, and my identity to become his lover.”

Schickel’s past, along with the pasts of other members of her family, reads like a feminist history spanning decades. It is also a vastly personal story of relationships, familial and romantic and traumatic, that will inspire more than one reader to skip ahead to find out what ultimately happened to her as she navigated her heart’s perilous journey.

When Schickel meets Spade, she has two daughters and has been married for many years to “a kind, steady, decent man.” When she considered the union, she felt that being the wife of a “genuinely good person,” would mean that she “could stop being Erika-the-fuckup,” despite— or perhaps because—theirs would be “a plain marriage.”

Nothing is plain about Schickel’s relationship with Spade, and not much is kind or steady or decent. He becomes a full-time obsession for her, as necessary as sunshine is to plants (“His gaze was photosynthesis.”) and, in the end, as damaging as a second-degree sunburn.

Schickel’s early years are spent in Manhattan with a nanny and attendance at a prestigious private school. Her parents separate, and her dad moves out, becoming a Mr. Goodbar as a newly single man. In keeping with the free-love ethos of the ’70s, when the owner of a comic book store asks Schickel on a date, her mother lets him take out her 13-year-old daughter.

There is a painful period after Schickel’s parents’ divorce when she has no real home and no one seems especially eager to have her stay with them. An episode of shoplifting—surely among the most universal of adolescent crimes in anyone’s lexicon—results in her parents sending her to a boarding school in Massachusetts. The Buxton School is in Williamstown, and it is here that Schickel will find her sexual freedom: “My dorm mother wisely took me to get fitted for a diaphragm my first semester at school, and I made good use of it at Buxton.” It is also where she will find, and lose, the feeling of being where she belongs.

Her mother can be terribly cold to her, while her father has his own needs to attend to. When the question of where she will reside during the long school break arises, her father is in Los Angeles living his own life, one he will guard: “. . . this summer I cannot be entirely or even largely ruled by your needs, your demands.”

Sanctuary, when it does come to Schickel, is only temporary. She has a successful and fulfilling senior year of high school and is accepted to Sarah Lawrence, her first choice for college. And then her teacher seduces her.

In this, Schickel is not alone; Part IX of her memoir is titled “A Brief History of Teacher-Fuckers” and covers her great-aunt Frances in Seattle in 1918 and her mother in Bronxville in 1954. In Schickel’s case, the sins of the great-aunt and mother were cruelly visited upon the niece/daughter. Her affair with the teacher will result in a request from the school that she leave campus. It will also result in emotional betrayal of her by the teacher and deep wounds to her psyche.

Years later, Spade is no less emotionally abusive. They live together, and he begins to isolate Schickel from others. There are rules to being Spade’s “mink-stole girl” (that is to say, being kept by Spade), including “No garish nail polish,” “Modesty in dress,” and “No dancing.”

Yet when her parents individually meet Spade, they both like him. He is, according to her mother, “a real old-school gentleman!” This old-school gentleman takes her daughter on an international book tour for his “memoir about his pursuit of women.” Originally titled The Big Hurt, it is released as The Baedeker Curse: My Grand Tour of Women. In it he uses Schickel’s real name, inspiring Joyce Carol Oates to refer to Schickel as “an opportunist” in her review of the book.

When Spade finally ends their relationship, he tells Schickel they will not be friends and they will never speak again, a prophecy that comes true. Spade professed great affection for her father but does not contact her when her father dies.

There is a timelessness to The Big Hurt which anticipates even as it steeps in sweeping issues of harassment and patriarchy. As Schickel observes, the “#MeToo movement was but two years old when I fell for Spade and hadn’t yet reached its cultural tipping point.”

Indeed, there is plus ça change, plus c'est la même chose outrage inspired by Schickel’s assessment of a woman’s role in a world of male entitlement: “We were only supposed to last for one incandescent moment, like mayflies, then flutter off into oblivion so that the men might be free to work, to publish, and to pursue their next great passion.”

In the Epilogue to her book Schickel reveals that her boarding school sent a letter 38 years after she had to leave Buxton to assure her that they are taking “reports of sexual misconduct brought by alumni very seriously” and have set up “a fund to help pay for victims’ therapy.” Nowhere in the letter is there “an apology or any admission of guilt or responsibility.” It is a classic example of too little, too late for Schickel: “I am glad for those who can be helped by this fund, but I doubt the fund would pay retroactively for the many thousands of dollars I have already spent on therapy over the decades.”

It is difficult to imagine a writer sharing their life’s story with more courage than Erika Schickel displays in The Big Hurt. Schickel’s prose and her story are brutal even as they are compassionate, raw even as they are elegant, hopeful even as they are tragic. If a “saga” can be defined as a story telling the adventures of a hero or a family, The Big Hurt is one for the ages.

Heidi Mastrogiovanni's essay "Our Monikers" will be published in 2022's Fast Fierce Women, the nonfiction sequel to Fast Funny Women.