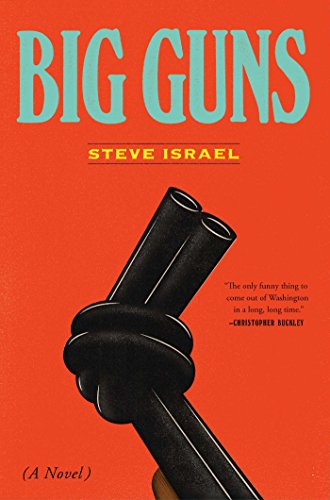 Absurdist fiction used to be the domain of playwrights, those desperate to poke fun at others and often at their own society in order to right a social or cultural wrong.

In his second novel Steve Israel throws off the cloak of his own political myopia (or culpability) and adorns himself with cynicism to spill all in a tale centered on an arms dealer and his female lobbyist as they seek to deal with yet another gun hot-potato incident.

Everything escalates as the left and right wings bring forces to bear on a small, elite, Long Island town populated by the same cross-section of current society: the ultra-wealthy versus the workers used to keeping them happy.

Mayhem ensues as the solution to gun violence is determined to be a lack of arms in every American’s hand thereby pitting forces on either side against one another as massive crowds gather, each to stake out their irreconcilable position.

The sleepy ultra-rich town at the end of Long Island becomes their battleground with media plying their trade in a truly comic and at times anything-for-ratings manner. No one comes off as honestly righteous or without fault.

This theater of the absurd rolls right over mores and values, highlighting everyone’s no-win positioning, especially the DC politicians who pass laws they know will get struck down by the Supreme Court, reveling in the divisiveness that will provoke, aiding their re-election chances. Cynicism coupled with absurdity makes for sardonic humor, at times too close to today’s reality as exemplified by the last lines of Justice Scallion’s appearance on a millionaires golf course, every word written with comic intended double meaning, as he agrees to support the pro-gun laws:

“So he leaned low into Sid and softly rendered his verdict: ‘I understand.’

Then sliced—far to the right.”

In the distant future one can only hope that this book is reviewed as a rather sad indictment of the world we inhabit. With crafted humor, Steve Israel levels the playing field of today’s society and politics, trotting out a plethora of PACs, lobbyists, consultants, industrial giants, spoiled rich, corrupt judges, touchy-feely do-gooders, and avid (violent) protestors to paint an honest picture of America in the throes of social revolution—even if that picture is disheartening as one thinks about it for any period of time (or watches today’s news).

Fortunately, the writing is good, allowing enjoyable satire and plot development to accomplish enjoyment instead of disdain. Without that deft touch, the book could be perceived as a diatribe. Much to his credit, retired Representative Steve Israel has created a book that is without obvious vitriol, a true insider’s perspective, yet remains absurdly compelling, packing a double barrel blast for the reader. Pun intended.