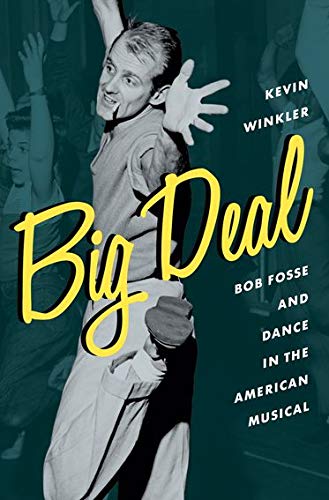 Bob Fosse was a choreographic creative force of nature who invented his own dance genre that changed American musical theater in his time and for generations of Broadway dancers to come. The 50s and 60s was a golden age of Broadway and Fosse dominated as a multiple Tony Award winning choreographer of Pal Joey, Damn Yankees, Redhead, How to Succeed in Business Without Really Trying, Sweet Charity, Pippin and Chicago, and in film he created a new cinematic dance language with hits Cabaret and All That Jazz.

As successful as he was, he also had his measure of failures, and even admitted to what he came to believe was a limited dance vocabulary. Former Fosse dancer Kevin Winkler’s Big Deal: Bob Fosse and Dance in the American Musical chronicles Fosse’s creative life: the good, the bad, and the ugly.

There have been many books about Fosse’s gregarious life and creative genius, most notably Sam Wasson’s 2014 definitive biography. Winkler’s book focuses on Fosse’s intense creative journey (and struggles), show by show, film by film of Fosse’s four decades’-long career. The book is part of the Broadway Legacy series by Oxford University Press, with analysis focused on the technical, aesthetic, and cultural aspects of theater arts.

Winkler has technical dance knowledge to make it incisive, but also a lively history of pivotal eras of musical theater and film during the late 60s and 70s. Fosse particularly sought to use dance theater to reflect the new era of sexual liberation, social turmoil, and racial diversity.

From Fosse’s early days as a “legitimate” act in houses of Burlesque at age 15, to his first successful jobs as an unconventional dancer on Broadway and in movies, to his tough guy persona as director-choreographer, Fosse never stopped exploring new ways to tell stories in dance.

Winkler was part of the dance cast of the 1982 revival of the musical Little Me and experienced Fosse’s dominating personality first hand in the studio and onstage. All of the Fosse lore, his endless rehearsal sessions, his brutal honesty about a dancer’s abilities and his relentless perfectionism come through.

Fosse’s personal relationships had everything to do with his creative life and choreographic success, as Winker details. Fosse’s wives Mary Ann Niles, Joan McCracken, and especially Gwen Verdon, who became his premier muse, were integral to his art—even when he left Verdon for Ann Reinking. Winkler weaves in the backstage dramas of Fosse’s personal life with reserve and sensitivity. Murkier is the fact that Fosse’s routinely had affairs with his female dancers and however skimmed over, is not completely avoided.

After he left professional dance, Kevin Winkler was curator and archivist at the New York Public Library. Winkler is a fine dance writer, distilling a lot of movement imagery in concrete terms and making reading about it fun. Winkler deconstructs what it means to be a Fosse dancer, which fused specific techniques of ballet, jazz, post-modern, burlesque, and showdance. Winkler also has a deft critical eye, assessing the merits (or lack thereof) of Fosse’s choreography artistically and commercially.

Even though Fosse’s style was indelible almost from the start, with each show he sought not only to recycle, refine, and solidify his best ideas, he would experiment. He locked heads with producers, writers, composers over control of concepts. He had the professional respect of his industry peers, even when he openly fought them for control. Winkler’s dissection of Fosse’s films from Sweet Charity, Cabaret, Lenny, All That Jazz, and Star 80 is given equal time from the creative standpoint.