A+ for Big Ben 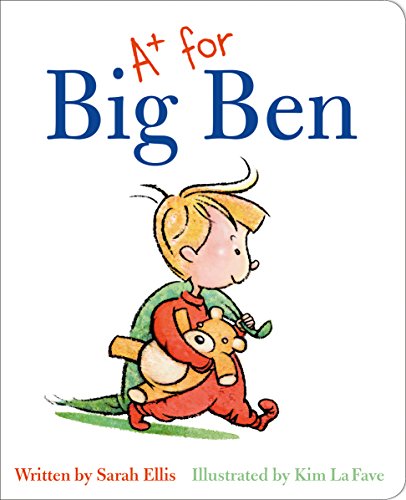 Sometimes growing up can feel like a race you’ll never win. But in this gentle story from Canadian author Sarah Ellis, a preschooler’s older sibs give him a chance to catch up.

Readers of this board book, a spring release in both Canada and the US, are sure to identify with just how hard it is to be Ben’s age: a younger brother with a pair of older siblings, he’s forever trying to catch up with. Especially at school. School, after all, is the great divide, where siblings are separated and the little ones left perennially behind.

Which is how Ben begins this simple, earnestly told story. After school, his older sister and brother bring home their report cards. Not Ben, though—preschoolers don’t get report cards. So Ben has no grades for his family to discuss. No comments to be read again and again.

And things don’t improve when the family goes out for dinner:

He cannot use chopsticks.

On the drive home, Ben’s sister and brother see fascinating things out the window—a dump truck and a man walking four dogs. Ben? He’s too little and sitting too low in the car, the illustration makes clear, to see more than the sky and the tops of trees. (Here’s where current readers of this reissue may part ways with our hero. Nowadays, mandatory car seats usually give little ones the best seats in the house!)

By bedtime, after contending with a world made for older, bigger folk, Ben is, literally and figuratively, pretty down. But his brother and sister finally notice what’s wrong and cook up a surprise on their computer—a special report card just for Ben.

I won’t spoil the fun you’ll have discovering what “subjects” his siblings decide to grade him in. Suffice it to say he’s very proud of his report card’s comments on the way he helps around the house and makes life fun for his family. By story’s satisfying end, that card on his bureau and his family’s love have worked the nicest, most ordinary kind of magic: our pint-size protagonist feels, not left out and little, but “big” and “totally cool.”

While board books usually feature less disparity between illustrations and text than picture books for older readers, one would still hope for a few more surprises in the pictures here. But there are next to none. La Fave seems to have found little inspiration in either the story’s setting or its feelings, since her pictures add nothing new to either. No snarky pets or extra characters required, but surely the blank and cheerless bulletin board in Ben’s school could use some details, a trace of life? And shouldn’t Dad, who materializes suddenly on the book’s penultimate page, be pictured at dinner earlier? Or at least when Ben first climbs into bed?

Still, if we’re left with a wish for more visual oomph or a few more laughs from this quiet gem of a book, we certainly couldn’t ask for a better message for little ones. Or for those of us who want to applaud them for being good enough and big enough—just the way they are.

Louise Hawes is the author of novels and short stories for children, young adults, and adults.