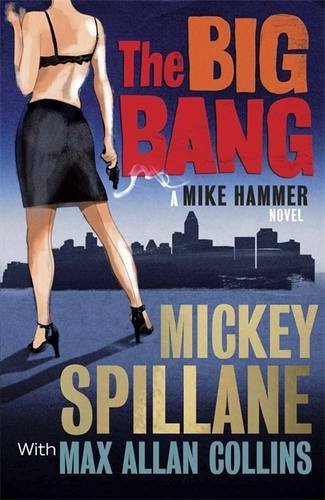 The cover tag to this book reads, “The Lost Mike Hammer Sixties Novel.”  It’s an appropriate definition as The Big Bang is set smack dab in the middle of that rocking decade when free love ruled, hippies and peaceniks protested the Vietnam War, and the British musical invasion was on thanks to the Beatles.

There was also another war raging on the streets of our country, one we could not afford to lose.  Illegal drugs, spurred by the open door attitudes that made marijuana harmless and LSD the “cool” way to trip, were flooding the mean streets, and an epidemic of lost souls was in the making.  Into this tsunami of heroine and cocaine, private eye Mike Hammer innocently stumbles when he comes to rescue of an unarmed young man being assaulted by three dope-heads.  Hammer leaves two dead and the third in serious condition, much to the chagrin of his pal, Detective Captain Pat Chambers and the new Assistant D.A.  Hammer’s reputation is a liability, as the second he becomes involved with anything, a violent bloodbath of some kind always ensues.

Hammer discovers that the boy he saved, Billy Blue, worked part time at a local hospital and the thugs who attacked him did so because he refused to steal drugs for them from that facility’s pharmacy supplies.  That in itself is nothing extraordinary, still Hammer has a nose for trouble even when it buries itself under such minor misdemeanors.  In this case the rash attack on Billy was instigated because, for some unknown reason, the illegal drug market on the streets had dried up and pushers and junkies were getting frantic to score their next fix.

All of which exposes a turf war in progress between the head of an old Mafia clan and a young, hippie club owner called the Snowbird, each vying to control the lucrative drug trade.  It doesn’t take Hammer’s nosing around very long to attract attention and soon assailants are coming after him with knives and silenced automatics.  Which is exactly how the tough guy works: stirring up a ruckus to see what shakes loose.

Spillane’s writing was always infused with a brash humor rife with sexual innuendos; and the more he wrote, the more prevalent it became.  It was his literary version of the magician’s sleight of hand: get the audience to focus on one hand while the other performs the hat trick.  His protégé, Collins, deftly adapts this style so that the transition between them is unnoticeable and delivers another marvelous Hammer tale.  The end was both expected and satisfying as it remained true to the character.  Mike Hammer isn’t a social worker, he’s an exterminator with a talent for dealing with human vermin.  It’s fun to see him in action again.