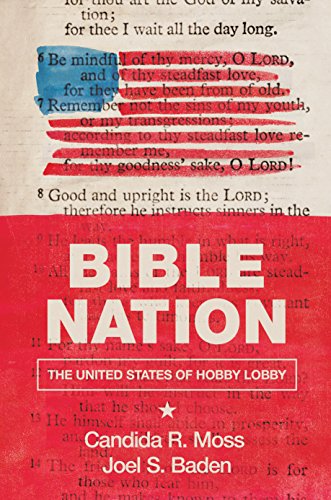 To many true believers, America is, was and always will be a Christian nation. It was founded by Christians, and its success as a political experiment rests solidly on the Protestant religion. Devotees bemoan the fact that there are some who follow other religions or, worst of all, no religion at all. Evangelical Christians dedicate their time on this earth to correcting the transgression of others by directing nonbelievers toward the teachings of Christ as contained in the Bible.

America certainly must be a bewildering place for those committed to any religious dogma. They act to save those who have strayed from the correct path and work to maintain a public policy that endorses their goals. It must be frustrating to find that all do not agree with the way evangelicals see this world through the lens of their true faith.

Billionaire and devout evangelical Steve Green owns and operates Hobby Lobby, the world’s largest privately owned arts and crafts retailer. He is committed to the international promotion of the Bible as the unerring word of God. Green has used his earned fortune in pursuit of that goal and is a major force within the evangelical community.

Two academic scholars skilled in biblical studies—Professors Candida Moss of the University of Birmingham in the UK and‎ Joel Baden of Yale—have written an important new book describing Green’s life’s work. At times quite critical of Green’s methods, in general Moss and Baden offer a balanced assessment of Green’s evangelical efforts. The capstone of Green’s religious enterprise is the new Museum of the Bible. Located in Washington, D.C., two blocks from the National Mall, the Museum’s grand opening was November 17, 2017.

Operating out of Hobby Lobby’s corporate headquarters in Oklahoma City, the Green family has collected an immense trove of original biblical writings. They believe that the words of the Book are infallible and an enduring testimony to the preeminence of Christ. When exhibited to all comers in Green’s museum, this tangible evidence will convince unbelievers and swell the ranks of true Christians.

There are problems with Green’s project of course, and Moss and Baden point them out. Green is not an academic scholar, and, for example, the methods his people employ to verify the provenance of papyrus—the bulk of the museum’s holdings—are questionable. Green is a successful businessman but an avowed dilettante when it comes to historical authenticity.

Green has spread his influence by using his financial resources to recruit professionals to work on his project who adhere to his religious vision. Some are academics at Christian colleges; others are students. While Moss and Baden offer a critical view of the trained historians employed by Green in the Hobby Lobby project, they only doubt their methods and not the essence of Green’s beliefs. Green keeps his hand in political circles and has established international connections with the right-wing government in Israel and with the Vatican. He claims that he is not proselyting, but his deeds suggest to the contrary.

Religion has always been a distinguishing characteristic of human groupings. The mysteries of life and the inevitability of death call for answers. Although science has provided some retrospective explanations, the largest gap left is what becomes of us when we die. Here is where religion has always offered a comforting certainty.

Of course, the evangelical calling depends upon faith and conviction, but many have found comfort in believing that, in the end, God will win. It is reassuring not to be left alone. For those who need evidence, Green has provided clear documentation that religion has maintained its hold on people for millennia.

Seventy percent of Americans hold the opinion that religion is important, the highest percentage among Western nations. Regrettably, however, many self-proclaimed believers act hypocritically. Sinning is not limited to non-evangelicals. Seeking power, money, and sex is not reserved for the unworthy.

In sum, Bible Nation is an admirable contribution to the literature in the field both as a critique and as a description of Green’s life project.