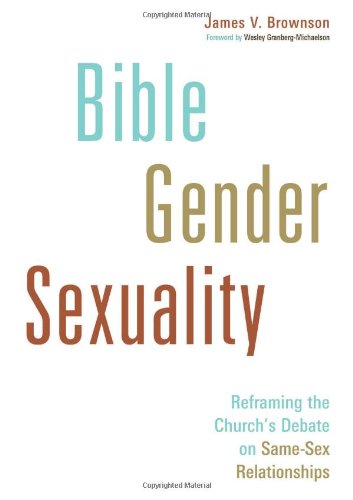 “. . . very academic and interesting, but misses the mark in the real world.”

The Democrats included the issue as part of their platform during the 2012 presidential elections. The military has taken significant (and extremely controversial) steps to support same-sex couples even though federal law prohibits recognition of these relationships. Same-sex marriage has been on the ballots of several states.

The issue is not just debated in the United States. Great Britain and France both are having heated conversations about same-sex marriage. Even the third season of Downton Abbey enters into the conversation (although in ways that certainly did not reflect prevailing attitudes in the 1920s).

Into this discussion comes James Brownson, a theologian and pastor with the Reformed Church of America.

Mr. Brownson wisely does not raise any issues relative to the nature-nurture debate. He does not explore the scientific issues (weak though they are) about homosexual tendencies. He chooses to focus on one component of the issue, but one that is definitely relevant to Christians: Does the Bible support the teaching that same-sex partners can enter into committed life-long relationships in the same way that heterosexual couples do?

Does the Bible support same-sex marriage? Mr. Brownson’s position is that the Bible sanctions these “marriages”—a position that is opposed by his denomination (their 2012 statement on the subject indicates that “. . . any person, congregation, or assembly which advocates homosexual behavior or provides leadership for a service of same-sex marriage or a similar celebration has committed a disciplinable offense . . .”

The book considers both the “traditionalist” and “revisionist” views on the issue. Mr. Brownson readily admits that the plain words of Scripture in both the Old Testament and New Testament prohibit any form of homosexual behavior.

He also rightly points out that major revisionist arguments that focus on love and justice are not sufficient to support their position; however, he then proceeds to develop arguments to undermine the plain words of the Bible by putting forth theories about gender relationships in the Bible and power structures that sound plausible when taken out of context, but cannot be supported by the Bible as a whole.

He then goes on to indicate that the writers did not really mean what they said, but were actually referring to other gender- and power-related abuses that were somewhat prevalent at times, but were never addressed in scripture.

He also spends a great deal of time on Old Testament practices and prohibitions and does not put them in the overriding Old Testament theme of keeping the children of Israel pure and uncontaminated by outside forces (this became a real problem more than once).

But we are also no longer bound by Old Testament teachings (read the New Testament book of Hebrews). While there may be some value in trying to understand Old Testament teachings, they are not binding on Christians. The New Testament passages dealing with homosexual behavior are quite clear, but Mr. Brownson tries to put the same spin on them, bringing up arguments that do not arise in the text and should not be inferred from the actual writings.

To his credit, Mr. Brownson tries to restrict the debate to committed same-sex marriage, although he does not deal with numerous recent statements by gay activists who want to remake the situation of marriage completely and the aggressive behavior of same-sex marriage supporters who oppose (often violently) those who hold another view.

Mr. Brownson’s analysis is very academic and interesting, but misses the mark in the real world.