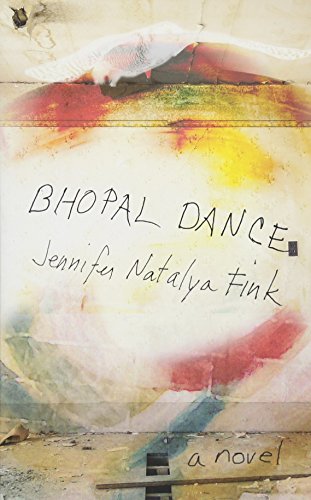 The first thing to say about Jennifer Fink is that she is intelligent, clever, and sometimes funny. Young readers in search of avant garde and experimental writing may well like her work in general, and specifically in Bhopal Dance. She did win the Doctorow Award for Innovation in the Novel and has been called “a 21st century author to watch.”

Perhaps, however, this one pushes boundaries too far. Fink is Beckett, Pirandello, et al. on speed. Her streams of consciousness and string of non-sequiturs can be hard to follow and seriously annoying, her characters are not very likeable, and her plot is thin.

But what really gets to be too much is Fink’s copious references to copulation, kinky sex, and bodily excretions emanating from and among the three main characters in the story, Cordelia—who narrates from a prison cell and talks to a toilet—Caren (who doesn’t live to tell the tale), and Ian, who manages to survive their mission.

These three people, adrift in a morass of their own making, form a 1980s triumvirate of would-be radicals, and a menage a trois, in search of a revolution. They finally come up with an act of violence to assuage their obsession with punishing capitalism. After the disastrous Bhopal chemical disaster in India, they decide to blow up the Connecticut home of Union Carbide’s CEO.

Some literary analysts might suggest that the preponderance of off-putting sex in this slim novel represents a physical reminder of how politically perverse the world can be. Both sex and politics are, after all, ways to express power and to dominate. But do we really need to know that Ian pees in the sink, and Caren likes to watch? Or that she kneels to trim his toenails while he “is taking a piss”? Or that when all three of them are having sex together, Cordelia waits her turn, then slaps Ian in the face, because “she knows this is the way to harden him, to retake him . . . Caren left to watch”? How many versions of “Do me, fuck me, both, harder” do we need to suffer through?

In the end, Cordelia comes to realize that “the enemy is not the state. The state is just another . . . powerful idiot. Too powerful to explode his enemies, or they’ll explode him right back.” Trouble is, by the time some readers reach the end of Cordelia’s tale, they’ll be ready to explode, needing to grab a towel and some soap on the way to the shower.