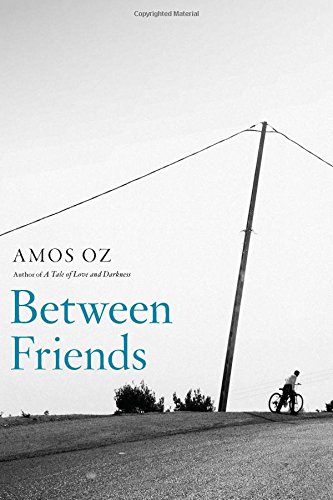 Amos Oz, who is now 74, spent his adolescence, young adulthood, and early middle age as a kibbutznik. His first book of short stories Where the Jackals Howl (1965) was set on a fictional kibbutz as was his first novel Elsewhere, Perhaps (1966). After 15 more novels Mr. Oz returned to short stories in Scenes of Village Life (also reviewed on NYJB), set in an upper middle class town of private homes in contemporary Israel.

In his new book of short stories, Between Friends, Mr. Oz returns to a fictional kibbutz, Yekhat, in the late 1950s and/or early 1960s.

Loneliness is an important theme in both of Mr. Oz’s recent books of linked short stories. But where in Scenes from Village Life there is a pervasive sense of unease and the characters experience despair and/or resignation, Between Friends is set in a more innocent, idealistic, and hopeful time (though one in which the trauma of the Shoah was more recent), and its psychological tension results from the conflict between Yekhat’s lack of privacy, collectivist mores, rules, and bureaucratic committees on the one hand, and the individual aspirations and inner lives of its members on the other.

Both are character driven books, and the empathy with which Mr. Oz portrays his characters, especially in Between Friends, is quite moving.

In “The King of Norway” Zvi Providor is a 55-year-old bachelor gardener who fears being physically touched and has a habit of initiating conversations by conveying bad news from the local and foreign press. Luna Blank, a 45-year-old widow takes an interest in him, and they start spending time together, but when she initiates physical contact he retreats and stops seeing her.

In “Two Women” when Osnat’s husband Boaz leaves her for Ariella the two women begin an intimate correspondence. Osnat will reappear in the book’s final story “Esperanto” as the evening caretaker of that story’s main character, Martin Vandenberg, Yekhat’s cobbler, a Dutch anarchist who spent the Nazi occupation in hiding, and who, though dying of respiratory failure, wants to teach his fellow kibbutzniks Esperanto.

In the title story Nahum Asherov is Yekhat’s taciturn electrician whose 17-year-old daughter Edna moves in with her former history teacher David Dagan, Yekhat’s Marxist ideologue as well as a womanizer with six children via four mothers. Nahum and David founded Yekhat as teenagers, are both 48, are regular chess opponents, and Nahum sees David’s seduction of his daughter as a betrayal. Here Mr. Oz returns to an earlier plot: in Elsewhere, Perhaps a middle-aged kibbutz member impregnates a 15-year-old girl.

16 year-old Moshe Yashar is a North African immigrant living and studying on Yekhat whose father is suffering from dementia in a hospital two long bus rides from the kibbutz. In “Father” the kibbutzniks resent Moshe’s continuing ties to his family but grant him permission for a brief visit to his father who doesn’t recognize him.

In “Little Boy” a father wants to take his five-year-old son out of the children’s dormitory where he is being bullied, but the kibbutz won’t allow it, and the father compounds his difficulties by hitting his son’s tormentor/kindergarten classmate.

Yoav Carni was the first baby born on Yekhat. In “At Night” he is its Secretary (executive officer), and we accompany him on his night rounds as he does guard duty. Yekhat member Nina Sirota decides to leave her husband and asks Yoav to find her a place to spend the night. In a case of misery seeking company she places his hand on her breast and makes it clear to him that should he also decide to leave his wife she would welcome him with open limbs. Yoav spends the rest of his shift thinking about Nina’s proposal/proposition and the state of his marriage.

In “Deir Ajloun” Yotam has just returned to Yekhat after his three years of compulsory army service and requests that the kibbutz wave the requirement that Yekhat children work on the kibbutz for three years before going to college so that he can accept his uncle in Italy’s offer to pay for him to enroll in an Italian university thus saving Yekhat the eventual cost of his tuition.

While the adult members meet to consider his request, which will probably be denied, he walks among the ruins of the former neighboring Arab town Deir Ajloun and tries to decide whether he wants to remain a kibbutznik.

Before the kibbutz meeting various characters discuss Yotam’s request, and some comment on kibbutz life, as Nina does here:

“The old-timers are actually religious people who left their old religion for a new one that’s just as full of sins and transgressions, prohibitions and strict rules. They haven’t stopped being true believers; they’ve simply exchanged one belief system for another. Marx is their Talmud. The general meeting is the synagogue and David Dagan is their rabbi.”

In the final story the funeral of Martin Vandenberg provides an emotional catharsis as readers bid farewell not only to that admirable character but also to all the characters Mr. Oz has portrayed with warmth and of whom readers will have grown fond.

Between Friends is enthusiastically recommended to all readers. Kudos to Sondra Silverston for her splendid translation.