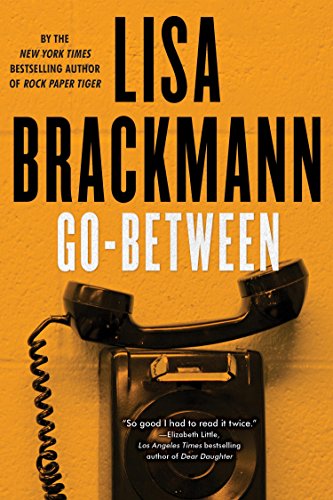 “Go-Between is a perfect title.”

Michelle Mason is between lives, between names, between worlds, between versions of herself.

Two years have passed since the events that went down in Getaway, and Michelle is still in the grip of what she calls the “Gary-verse.”

Gary is the villain, the evil puppeteer. Ex-CIA. Or something. We meet him right off the bat in Go-Between. That is, after a quick bit of scene setting. Michelle runs a bistro in Arcata, California. She frets about the payroll, ponders the deals she’s getting from her wine suppliers, does some filing, waters her plants. She has problems here and there, but she is making do. “The Cal State faculty made up a good chunk of her regulars . . . Them, and the more professional cannabis entrepreneurs.”

This is, after all, northern California—long a stoner’s paradise.

Michelle’s boyfriend Jeff is a volunteer firefighter who occasionally does “gigs” for Bobby, a guy who has some hazy role in the marijuana trade. “Gigs” means help move weed out of state. Michelle wants Jeff to keep it clean. But even Michelle isn’t sure what she wants and that includes Jeff. “It wasn’t like they had a commitment. What did they have in common, really? They’d been thrown together, and they’d stuck together because it seemed to make sense . . . She wasn’t sure she even remembered what being in love felt like.”

And then Gary walks in, trailing all that happened in Getaway. Gary references jail time and “multiple fractures”—all thanks to Michelle. All Michelle can do is think about shooting Gary on the spot for all that went down before.

But it’s more complicated than that. It turns out Jeff is actually Danny and Michelle is actually Emily, and Danny also has a business relationship with Gary, though that’s not clear to Michelle/Emily.

By Chapter 3, Danny has been put in jail for drug trafficking, and soon Michelle is on her way to Houston to visit Jeff/Danny and try to figure out how to get him out. Who turns up? The all-knowing Gary, with an enticing offer: that Michelle take a job as a personal assistant serving a woman who is running an organization called Safer America. Gary offers big money that will help with all sorts of things, such as hiring a restaurant manager to covering legal bills for Jeff/Danny. The delicious irony? Safer America advocates for victims of violent crimes and seeks tougher penalties on criminals with a special focus on those dealing with drugs.

And we’re off. The plot moves from Texas to Los Angeles and back to Arcata. We’re in Michelle’s head the whole time as she starts to dig into the companies and individuals who are behind Safer America. Michelle earns a level of trust with Safer America’s public face, a woman named Kaitlin O’Connor. She’s wine-guzzler and apparently has access to infinite financial resources.

“She turned on a little lamp on the dresser. Normally she slept better in dark rooms, but tonight, she didn’t want to sleep too deeply. She just wanted to get enough rest to function tomorrow, until she could safely sleep on the flight from San Francisco to Houston.

“Hell, maybe I’ll upgrade, she thought. She had the cash, after all.”

Along the way, via easy Google searches, Michelle opens her eyes to the for-profit prison industry and racial disparity in criminal sentencing. The term “non-profit” is not interchangeable with “do-gooder.” The political message isn’t too heavy handed, but the “investigation” comes without breaking much of a sweat. At times, you feel like Michelle is more the ping-pong ball when you wish she was the paddle.

Soon the veils drop, Danny gets out of prison, and Michelle uncovers a nasty conspiracy. There is a considerable stake, it turns out, with the status quo. And that includes Emily/Michelle, still uncertain where she’s going, who she’s going with, and what she’ll be doing next. She’s a go-between alright. And also in-between, it seems, just about everything.