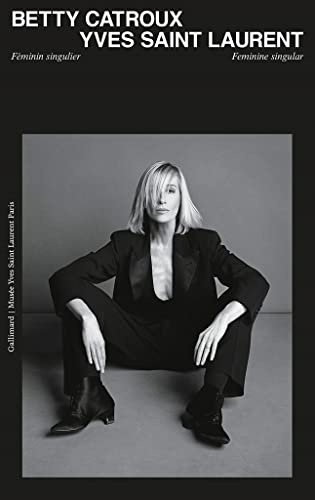 “1967 was a vintage year in the history of muses, those extraordinary creatures endowed with an irresistible and mysterious je ne sais quoi that kindles the imagination and inspiration of artists.” —Olivier Lalanne

Betty Catroux, Yves Saint Laurent: Feminine Singular is a memoir of sorts, a love letter, the anatomy of a friendship that was more like a romance as well as an endearing and melancholy trip down memory lane. Melancholy in a way that is not teary but joyous, that expounds on friends who were more than just kindred spirits with their singular vision of how life should be led, warts and all. The depth of their relationship is something that very few of us ever get to experience in life.

“She was the height of deified nonchalance in the front row of the fashion shows; captured by the world’s greatest photographers, including Irving Penn, Helmut Newton, Jeanloup Sieff, Steven Meisel; on vacation in Marrakech; or arm in arm with Yves during inaugurations of shops and exhibitions from New  York to Tokyo,  Beijing to Los Angeles.” —Olivier Lalanne

Much of what is written is in Betty’s voice and there can be no doubt that this woman speaks a pure unembellished truth about her life, his life, their lives, as well as the lives that saved them both from each other.

“Our lives were only about having fun, about excess, insouciance, the unexpected, adventures and escape.” —Betty Catroux

So much of what is written can be more genuinely appreciated if the reader is well versed in the era as well as the designer and his inner circle. One may feel as if he was either being spoken to directly or eavesdropping on a conversation recalling times gone by whether they were in Paris, New York City, or Marrakech. They were grand hedonists in the truest sense of the word who took life and milked the hell out of it—sometimes to their detriment—but no one can say they didn’t have a good time and lived by their own rules and on their own terms.

There have been numerous monographs written about the inner circle of Yves St. Laurent, but this is the very first that exposes and explores the life of Betty Catroux as well as the relationship between YSL and his “Pulu.” You’ll have to read the book to understand what that moniker signifies and most assuredly it is well worth the read of this photo-filled chronicle—especially if the reader is of that generation.

Lastly, the prospective reader should keep in mind that this book is bilingual in both French and English and that the translation is nothing short of superb.