Better Davis and Other Stories 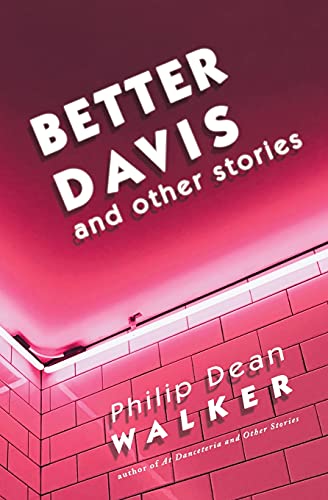 “Hyperbole and exaggeration are the definition of camp, an air of performance also part of the package, and Walker’s characters obligingly give the impression of always being always in desperate need of an audience.”

In Better Davis and Other Stories, a short book of 98 pages, Phillip Dean Walker ekes levity out of the early AIDS years.

Though decades too young to have lived through the epidemic’s most wrenching years himself, Walker, born in 198o, spins out highly imaginative tales of how the next decade of celebrities and drag queens—Elizabeth Taylor, Natalie Wood, Rock Hudson, Maureen Stapleton, Sammy Williams—might have coped with its gruesome, heartbreaking reality.

Kirkus Reviews named Better Davis Best Indie Book, and it received advance praise from the likes of Felice Picano and other gay authors. Yet the result is mixed if not bittersweet for those who did live through the worst years, before even halfway drugs became available and young people in their prime who had no business of dying were terrified of coming down with a disease that had no cure.

Walker debuted his signature brand of what his publisher calls “historical-celebrity fiction” in Danceteria and Other Stories. If that earlier book’s theme was, “We need to dance all night because we might die tomorrow,” then the theme of Better Davis is, “The show must go on.”

And it does. The jokes are abundant. Some are entre nous (“the world’s thinnest fag hag”) for readers who know that fag hags by definition are zaftig. Most others are comic moments such as Elizabeth Taylor criticizing Maureen Stapleton.

A surfeit of alcohol marinates these pages, reminiscent of Dashiell Hammett whose heroes excused their morning eye opener by claiming, “it cuts the phlegm.”

Sexual banter is frank rather than clever (“Joan Crawford would fuck a doorknob if you asked her to”), and the tone bitchy (“His face was the reason God created paper bags”). Imagine the atmosphere of All About Eve transported forward and you get the idea. On the other hand, is gang rape really amusing, or is talk like, “You still look pretty hot for a rape victim?”

Just how far can a joke go? The young cannot know what it was like to live through those times, and the cultural-generational gaps between older and younger gays grows bigger with every passing year.

Much in these stories is portrayed as BIGGER THAN LIFE. Early 1980s drag shows are posited as “legendary. Hilarious and unique. Smart and . . . everything truly exceptional about being gay at the time” [my emphasis]. The character of Elizabeth Taylor’s late-career stage debut in The Little Foxes, “Regina Hubbard Giddens[,] was one of the great female roles of American theater, a steely no-nonsense southern bitch who is rich and lethal.”

Such assertions are arguable, but then hyperbole and exaggeration are the definition of camp. An air of performance is likewise part of the package, and Walker’s characters obligingly give the impression of always being in desperate need of an audience.

If there is a fault it is Walker’s relentless dose of bitchy cant when a quieter arch tone would suffice. The book suffers in being monotonic. Its rhythm suffers, too, because every incident and anecdote receives equal weight, meaning that what is most meaningful never stands out for the reader as it might.

Perhaps Walker didn’t also imagine the effect his tales might have on an audience whose loved ones died prematurely in those decades, and who were forced to survive bereft and alone. For them, the plague years were not a time for jokes and levity. Forgetting that may be the bigger lapse of Walker’s imagination.