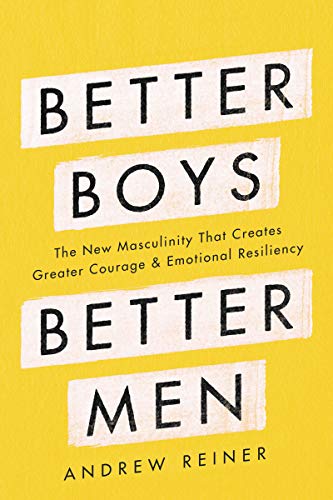 In Better Boys, Better Men, Andrew Reiner convincingly details the harm males cause when on a quest to establish their hypermasculinity. If successful at dominating others, a boy or man pays the price of emotional disconnection. If unsuccessful, there is an additional price. Reiner cites examples of boys who, unable to dominate and avoid being dominated, were left emotionally isolated, depressed, and suicidal.

Reiner says, “the problem is that the old model of masculinity, which champions a do-it-yourself, grin-and-bear-it ethos of emotional stoicism, endless self-sacrifice, and unwavering certitude, no longer serves men—or anyone else, for that matter.”

He sees education as the solution because school is “where most of their early social development occurs.” But identity is a deep issue. Identity is not likely to be changed by education. And what of dominate-and-avoid-domination messages embedded in athletic programs? Even if education could cause a boy to adopt a healthier identity, an adopted identity is unhealthy because of its inauthenticity.

Healthy identity requires accurate psychological mirroring. Prominent psychological theorists Anthony Bateman and Peter Fonagy say children are genetically predisposed to look for, and to respond to, mirroring of their real self.

Emotional resiliency, part of the book title, is not produced by education, but by what attachment theorist John Bowlby called “internal working models of secure attachment,” a sort of mental app that contains moments in which signals from the face, voice quality, and touch of an empathically attuned person activates the child’s calming system, the parasympathetic nervous system. Based on internalized benevolent experiences, this app can activate the parasympathetic nervous system and down-regulate stress as needed throughout the lifespan.

It is unclear whether Reiner understands the mirroring needed to develop a healthy identity or the non-judgmental parent-child experiences required to develop emotional resiliency. In the Postscript to his son, he writes, “I’m trying to think of the words I want to share with you but didn’t this afternoon when you grew inconsolably angry. . . . On the car ride home today, you were very upset and had that wounded look you get on your sweet little face. . . . Eventually, you shared with me that one of your first-grade friends, Luke, had cut in front of you to take a turn at bat during kickball. ‘I thought he was my friend,’ you barked. ‘Friends don’t do things like that to each other.’”

“‘I think it’s great you’re thinking about what makes for a good friend,’ I responded. ‘But Luke probably didn’t even realize that he had done it. I bet it was an accident.’”

“Arms crossed, lips pursed, vigorously shaking your head as you continued to look out the window, you weren’t having any of it. Then I suggested . . . ‘Maybe tomorrow you can tell Luke that what he did hurt your feelings, because it sure seems like it did,’ I said in the car. When you heard this, you practically exploded from your car seat. ‘I knew you were going to say that!’ you bellowed.”

What Reiner knew educationally did not translate into behavior. He takes on a hypermasculine role he intellectually rejects: “the fixer.” Instead of tuning in to his son’s feelings, he invalidates them. The boy doesn’t buy it. Nor should he. He needs a response that resonates with the hurt he is feeling.

Trying to fix his own feelings, Reiner looks for understanding. He tells his son he has been trying to make him into a healthy man. “Since you were five, you have been making comments and asking questions about war, fighting, and death. . . . I’ve been wracking my brain trying to understand why. After all, Mama and I don’t allow you to play violent video games, nor do we allow you to watch violent cartoons or television shows. And we always encourage you to ‘Use your words’—and to describe your feelings—instead of reaching for your fists or “fisted” words. . . . This was why I lost my cool when you asked the seemingly innocent question one morning at breakfast, ‘Do they still shoot soldiers for running away during battles like they did during the Civil War?’”

“‘Could you please stop talking and thinking about violence all of the time?!’ I snapped. This is something I find myself asking you, with varying degrees of patience, over and over.”

When it comes to making a better boy, a parent needs to mirror the boy they have before molding the boy they want. To do otherwise disrespects the child’s real self. And disrespect, as Reiner stresses in this book, promotes aggression and violence. We should bear in mind, when criticizing hypermasculinity, that there is such a thing as healthy aggression.