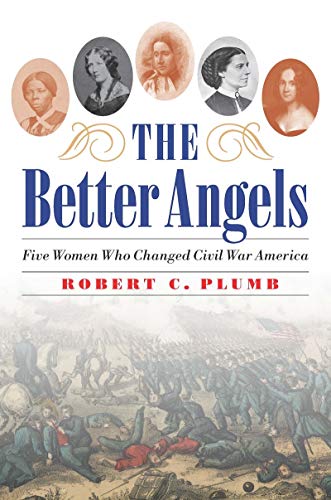 If one were to draw a Venn diagram to help explain Robert Plumb’s well-intentioned but flawed book about five significant women in American Civil War history, its overlapping circles would include women’s history, the civil war, and slavery. The problem is that Plumb seems to have had difficulty deciding which of those topics he really wanted to write about.

Sadly, his book, meant to honor five women who had a significant impact on America at the time of the Civil War, falls short of describing them in depth. Where, we must ask, is the gender lens? Why has he relied so heavily upon what other biographers and historians have told us? Why so much focus on the men in their lives, the events of America’s devastating war, and the abolitionist movement—all tumbled together in poorly structured, convoluted chapters that include confusing transitions and random quotes?

The women he cites for their persistence, courage, resourcefulness, compassion and more, whom he keeps referring to as “better angels” so that it becomes an irritating, paternalistic reference, are Harriet Beecher Stowe, Julia Ward Howe, Clara Barton, Harriet Tubman, and Sarah Josepha Hale, who we can thank for having Thanksgiving Day.

The other four women need no introduction, and why Plumb felt that Hale deserved to be in their company is not only confusing, it’s astonishing. Stowe wrote Uncle Tom’s Cabin, Julia Ward Howe penned “Tthe Battle Hymn of the Republic,” Clara Barton founded the Red Cross, and Harriet Tubman went beyond freeing slaves via the Underground Railroad; she was also a nurse and spy in the Civil War. How does Hale’s attempt for post-war reconciliation by way of a national holiday stand up to that?

This is not to suggest that the lives of these women are not noteworthy. In most cases they are compelling. Each of them deserved her rightful place in history. Clara Barton’s wartime work and Harriet Tubman’s stunning life, in particular, deserve all the attention they can garner. And Harriet Beecher Stowe’s important literary output and political convictions in the face of frequent family tragedies is amazing. But a book about women like these deserves to be treated with care and a deep understanding of their interiority and contributions such that they are not overshadowed by a heavy focus on contemporary events or controlling men.

To his credit, in his conclusion, Plumb acknowledges that “detailed, well-researched narratives of most of these five women have been produced” prior to his book, and that “recent biographies have presented nuanced, more human stories” of women who “struggled with obdurate husbands” and more while navigating exceptional lives.

What a shame that he has not given us a glimpse into their complex lives by way of their own words. And what a shame that his book doesn’t offer anything new to add to what feminists and historians already know about these women and their times.