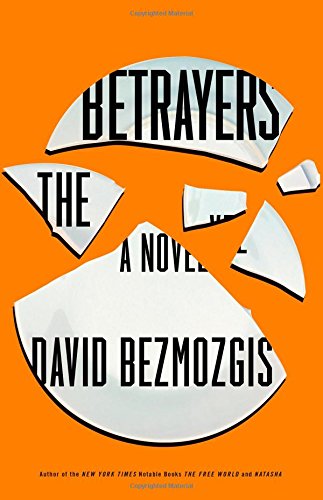 “The Betrayers succeeds by combining thought provoking ethical dilemmas with dramatic tension in an engaging prose style and is enthusiastically recommended.”

David Bezmozgis’ second novel The Betrayers, a novel about ethics, morality, and the cost of being true to one’s convictions written in handsomely lean yet literary prose, fulfills and surpasses the promise of his debut novel The Free World.

In both novels the characters are in a kind of holding pattern, but where The Free World’s Russian-Jewish emigres are adapting to the way of life in a Western democracy in transitional housing in Italy over a period of months in the 1970s while waiting to learn which Anglophone country will receive them, in The Betrayers the contemporary action transpires over only a day or two.

Liberal readers should ignore or overlook the protagonist’s right-wing Zionist politics; the correctness of his principles matters less than his steadfastness in standing by them. Our fictional hero Baruch (formerly Boris) Kotler (who combines some aspects of Israeli foreign minister Avigdor Lieberman and even more of those of Soviet dissident turned Israeli politician turned NGO executive Natan Sharansky) is a former refusenik and Israeli politician who is betraying his wife Miriam with Leora Rosenberg, a subordinate half Miriam’s age and the daughter of refuseniks, and who finds himself the victim of a blackmail attempt for his principled refusal to support the government’s plan to withdraw from West Bank settlements.

As a consequence of his refusal to budge on the policy issue photographs of him and his paramour are reprinted on the front pages of Israeli newspapers. To escape the media firestorm Baruch and Leora go on an overseas vacation to the Crimean resort town of Yalta where Baruch’s family spent summer vacations when he was a child.

When Baruch and Leora arrive at the hotel they discover that it is overbooked and their room has been given to other guests, so they return to the airport where locals hold signs offering rooms in their homes for rent (think of a Russian Airbnb minus the Internet). In an unlikely coincidence that is essential to the plot Baruch discovers (after unpacking and settling in) that his landlady’s husband is none other than Chaim (formerly Vladimir) Tankillevich, his former friend and Moscow roommate who betrayed Baruch to the KGB, resulting in Baruch’s arrest, trial and 13-year imprisonment in the Gulag.

In a reversal of fortune Baruch is now a prominent Israeli politician, while Chaim scrapes by in near poverty. Like members of the losing side in other historical conflicts Chaim feels no remorse or contrition and instead sees himself as a victim.

In the KGB’s equivalent of a witness protection program Chaim was resettled in a small town in eastern Ukraine where there were no other Jews and where he met his wife Svetlana. From there they moved to Yalta where they subsist by taking in lodgers, growing their own vegetables, and on a small stipend Chaim receives from the Jewish community in exchange for attending services every Saturday at a synagogue several hours’ bus ride away that cannot reach a minyan (quorum of ten) even with Chaim’s participation.

[SPOILER ALERT] When Baruch and Chaim finally meet it turns out that when Chaim denounced Baruch to the KGB Chaim’s brother was on a waiting list for a life saving medical procedure. Unlike Baruch, when faced with blackmail Chaim put his family member’s well being above his principles. But he nonetheless still considers himself a Zionist, wants to emigrate to Israel with his gentile wife and half-Jewish daughters, and feels he needs Baruch’s public forgiveness to do so.

In an emotionally moving email to Baruch, Miriam concurs with his decision not to compromise his principles (which are also hers) but also expresses her dismay that for the first time she doesn’t know where he is. But the Kotlers' marriage was also harmed by Tankillevich’s betrayal: during the 13 years of Baruch’s imprisonment Miriam living in Jerusalem became religiously Orthodox, and when they were reunited they had different world views, and he didn’t fit in with her new friends.

Observing the moral contrast between Baruch and Chaim makes Leora realize that she is not as uncompromisingly principled as her paramour and wonder whether or not they really are compatible. Readers may wonder whether Baruch’s ethical rigidity is a symptom of Asperger’s syndrome.

A book of this length is likely to be weak on character development, and The Betrayers is no exception, but The Betrayers succeeds by combining thought provoking ethical dilemmas with dramatic tension in an engaging prose style and is enthusiastically recommended.