The Betrayal of Mary, Queen of Scots: Elizabeth I and Her Greatest Rival 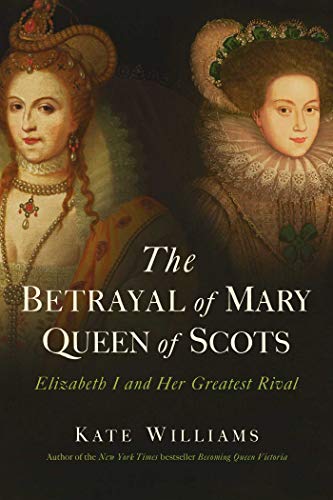 “In spite of the depth and detail of this book, it is a fast read and worth sitting with a cup of tea by a warm fire from first page to last.”

For the anglophile who revels in long-ago history of England, Scotland, and those general environs, then Kate Williams’s new book, The Betrayal of Mary, Queen of Scots should be on his or her immediate wish list.

At first glance, looking at the cover, this could be interpreted as just another story about Queen Elizabeth I and her unkind treatment of Mary Stuart, Queen of Scotland. But the book goes much deeper than its cover; the depth of Williams’s research dredges up behaviors and bad treatments that surrounded Mary throughout her life, much closer than Elizabeth.

While Elizabeth may have been the instrument of Mary’s death, getting to that point was a series of betrayals that started six days after her birth when her father, King James V of Scotland, died in battle, resulting in Mary becoming the Queen of Scotland.

From the beginning, this is an untenable situation as women were not considered strong enough to reign over a country. Women needed a man to make the decisions, and thus began Mary’s long journey.

Needless to say, this does not sit well with the reigning royalties of England, and the seeds of espionage quickly begin to sprout and grow for several decades. Mary is never far from the watchful eyes of the powers in England.

Mary’s religion can be interpreted as another betrayal. Upon her husband’s death, Mary is quickly returned to Scotland, a Protestant country. Devoutly Catholic, Mary finds that her beliefs are not readily accepted in her home country and she is forced into searching for a husband who would rule the land as determined by the powerful lairds.

Among the Protestant leaders in Scotland is John Knox, a man who has no use for a Catholic leader, especially a Catholic female leader. He frequently speaks against Mary for her Catholic activities. “If Mary retained the Catholic faith, it was against the true word of God and her subjects could be allowed to rise up against her.”

Another betrayal . . . as an unmarried queen, she is a target for many man who covet the power of the throne. Among these is a first cousin, a Catholic, Henry Stuart, Lord Darnley. Born of aristocratic parents who dearly crave power, Darnley is soon groom number two. Handsome, spoiled, and a womanizer, it is not long before he demands to be declared king. Increasing her religious problems is her placement of David Rizzio, a Catholic confidante, in the position of her personal secretary, raising deep jealousy with her power-hungry husband.

During her marriage, Mary gives birth to a son, James, and yet another betrayal occurs when James is spirited away to be raised in the Protestant religion. Mary’s marriage begins to crumble, and at the same time the Protestant lairds, who are already powerful, see Darnley as an impediment to their goals, and he is murdered.

Again, betrayed by her gender, Mary is once again a marriage target. Oddly enough, the primary contender is James Hepburn, Fourth Earl of Bothwell. Bothwell is the primary figure in the murder of Darnley, but he is acquitted of the crime and gathers enough lords and bishops to agree that he is the next most viable candidate to marry Mary.

Through this book Williams gives exceptional description to personal events that occurred in Mary’s life, but among the most disturbing is the behavior she describes on Bothwell’s part. He gives no respect to Mary as the Queen of Scotland and physically abuses her on a number of occasions.

The marriage is volatile, and it does not take long for the lords to turn against Mary and Bothwell. “The lords were planning to attack Holyrood and seize her . . . Bothwell forced Mary to flee . . .” Bothwell abandons her, and had Mary revealed the abuse she suffered at his hands, things might have turned out differently, but she does not, and Mary is imprisoned.

Mary escapes from her imprisonment and flees to England where the realization of her situation seizes upon her. “Mary had been broken and blown back and forth by the winds of betrayal and treachery, old friends and changing sides and being lied to . . . Mary’s men were deserting her.” She expects to find solidarity with Elizabeth but the final betrayal, of course, occurs when Mary is taken into custody. As she expects support from Elizabeth, she is greatly disappointed when she finds herself moved to various locations, but never to see Elizabeth.

The course of her life does not improve, and her many pleas to Elizabeth I of England, although answered, are not supported. Those around Elizabeth see crimes where they might not exist, but better safe than sorry. “Elizabeth’s ministers were constantly terrified that she could be threatened and killed . . .”

As life would have it, an assassination plot against Elizabeth is discovered, and Mary is indicated as a participant, thus sealing her fate. She is tried and convicted of plotting to kill Elizabeth and sentenced to death.

Williams does an exemplary job of researching Mary’s life and placing it before us as a series of betrayals. Mary is shown to be a woman not often in control of her life, a woman who frequently makes bad decisions for what she deems good reasons—decisions that always come back to bite her. She is portrayed here as a woman living under a dark cloud of treachery from the time she was six days old until the moment of her death.

It should also be noted that although Elizabeth might have taken more definitive action on Mary’s behalf, she knew the delicate nature of a woman in power, especially one without a husband, and perhaps her betrayal is more suited to those around her who gave her advice, perhaps not always on her behalf.

In spite of the depth and detail of this book, it is a fast read and worth sitting with a cup of tea by a warm fire from first page to last.