The Betrayal: The 1919 World Series and the Birth of Modern Baseball 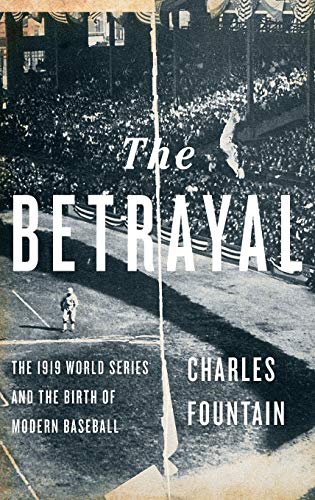 “the definitive work to date.”

Most sports fans know the principal events of the Black Sox story: eight players on the 1919 Chicago White Sox club took gamblers’ money to fix the World Series. They were acquitted in criminal court and then banned from baseball for life by the new commissioner of the game.

This corrupt incident has been well trod by prior historians of the national pastime. No one, however, has researched and written the story better than Northeastern University Professor Charles Fountain in The Betrayal: The 1919 World Series and the Birth of Modern Baseball.

Baseball has always served as a mirror for America. The glorious summer afternoons of American exceptionalism, the perversion of thrown contests, the exploits of blessed role models, like the Christian Gentleman Christy Mathewson, and the tawdry steroid scandals of Alex Rodriquez—these have all shown America at its best and at its worst. The story that Fountain tells is perhaps the foulest chapter of the game’s history and demonstrates America’s fatal flaw: Anyone will do anything for money.

Although many have written about the fix, the details of the story remain obscure: “The Black Sox story,” Fountain writes, “is like a puzzle with a thousand pieces.”

He has done a superlative job of making the pieces fit and discovering new ones using the extensive primary and secondary resources of the library at the Baseball Hall of Fame in Cooperstown. Fountain accumulates the known information, then makes reasonable inferences based on those facts.

Unlike others who have addressed these same events, Fountain invents no conversations. He simply reports what occurred. Most who have covered the same ground have done so with an ulterior motive, mostly to show the players were justified in their nefarious activities. Fountain, a talented and experienced academic journalist, leaves it to the reader to draw conclusions from the events.

The book starts with a review of baseball history where game fixing, known in the 19th century as “hippodroming,” was a common phenomenon and gambling was an essential part of the baseball “cesspool.” He excoriates Hal Chase, the greatest fixer the game has ever known, as a “bitter, brooding and cynical misanthrope” who thought the rules did not apply to him. “Prince Hal” was the sport’s worst nightmare: a matinee idol with star athletic skills who was rotten to the core.

Fountain places the events of 1919 into context. World War I had catalyzed dissent in the ranks of both owners and players, demonstrating the game’s lack in leadership and direction. Baseball lost the public’s goodwill as it maneuvered to protect its market while the rest of the world seemed destined to destroy itself.

The players who agreed to throw the series and the gamblers who promised them money—but never delivered all that they had promise—were disorganized, incompetent criminals. “The lines between conspiracy and comedy sometimes blur.”

The press—clearly an object of Fountain’s disdain—was divided into those who thought it was their primary responsibility to uphold the myths of baseball and the very few who could not ignore the inept play of the White Sox in the post-season series. Only gangster Arnold Rothstein, the New York crime kingpin, seems to have known what he was doing—at least until he was gunned down a few years later.

Fountain heaps scorn on both Ban Johnson, the president of the American League who ran organized baseball for two decades, and his archenemy Charlie Comiskey, the owner of the White Sox, who only seemed worried how the scandal could become an impediment to his business.

Fountain’s graceful and animated writing is filled with the metaphors more common to the sports journalist than an historian. He uses newspaper accounts to add contemporary context. His vibrant storytelling of each game of the 1919 series shows how difficult it was for the Black Sox to orchestrate the outcome they sought.

Fearing for his moneymaking enterprise, Comiskey then orchestrated a cover up using his financial resources, his lawyer, and a private investigator. If there is a hero in this tale, it was Hugh Fullerton, a reporter who could not ignore what he had recorded as he witnessed the series. With Fullerton the only writer in pursuit, the dam eventually broke. The grand jury heard from the crooked players – now renamed by the press as the Black Sox. They were indicted, tried and eventually acquitted in the Chicago courts.

Meanwhile, a seismic change in baseball leadership was engineered by those, like Comiskey, who sought to replace Johnson with an independent and respected outsider to the game. The owners chose Judge Kenesaw Mountain Landis.

Landis would rule baseball with an iron fist for a quarter century, perhaps exactly what the game needed, although only for a much briefer interregnum. Landis ignored the results of the jury trial and banned the Black Sox from the game for life. He would continue to impose arbitrary and capricious edicts on the game until his death in 1945.

In the final chapters of the book, Fountain explains what happened to the banned ballplayers in the years that followed. Most tried to stay close to baseball if only as the game was played by “outlaw” clubs not part of the established minor leagues. None seemed to regret their decision in 1919, and Fountain does not express his opinion. As a result, The Betrayal offers the unvarnished facts to the reader and allows each to reach a judgment about this turning point in the national game. There may be other authors who will try their hand at describing the Black Sox scandal, and, if they do so, they must start with the work of Charles Fountain, who has written the definitive work to date