The Best Is Yet to Come: A Novel 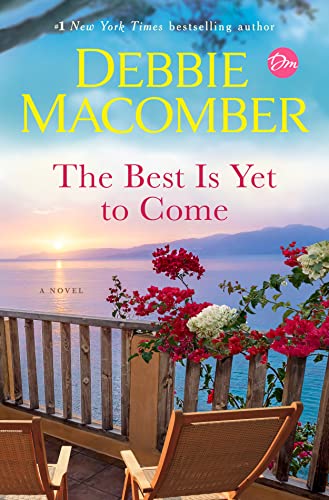 Debbie Macomber has once again given readers a delightful story, relatable and likeable characters, and the perfect level of tension. The Best Is Yet to Come tackles the insecurity and frustration that accompanies PTSD, with a beautiful sensitivity to those who suffer due to family upheaval as well as those who have served our country in the military.

Hope Godwin has lost her twin brother to a military accident and can’t fathom life without him. Unable to face a solitary life in her hometown, Hope relocates to Washington State and takes a teaching job at a small, private school. Though she loves her job and adores her students, it’s not enough to fill the void in her heart, so Hope begins to volunteer at a local animal shelter where she meets Shadow, a rescue dog who needs Hope as much as she needs him.

Estranged from his family, Cade Lincoln has never forgiven himself for surviving an explosion in Afghanistan that killed his two best friends and left him with a Purple Heart, a limp, and a lot of guilt. The limp and the pain he suffers are not enough punishment, in his mind, for living. After a drunken brawl and arrest, a merciful judge grants Cade a reprieve. Rather than spending a year in jail for his crimes, Cade is sentenced to mandatory physical therapy, emotional therapy, and community service. He’s not happy about any of it. With his friends gone, the least he can do is spend time in jail atoning for his sins.

Shadow is looking at a needle and eternal rest for the sins he has committed—being untrainable and highly aggressive. What the dog really needs is someone to trust, someone who will love him and see past his pain, someone who will see into the goodness of his heart. Hope is convinced that she can save Shadow from being put down, but everyone else at the shelter has their doubts, everyone except Cade. Man and beast—both hurt and unloved, untrusting and misunderstood—have a lot in common, including their affections for Hope.

The Best is Yet to Come takes the reader on a journey of the soul. Hope’s heartbreak and Cade’s self-loathing are no match for the love they find in each other and in a hostile mutt that nobody else wants. When one of Hope’s students gets involved in a dangerous game that puts other students and their teacher in jeopardy, Cade’s military instincts go on high alert. He lost his two best friends, and he refuses to lose the woman he loves.

With a cast of characters readers won’t be able to resist rooting for, The Best Is Yet to Come blends heartache, fear, and pain with hope, trust, and love to create the perfect recipe for a love story. Bridging the divide between love and loss is an often-used literary device but one that Macomber excels at. Cade’s struggle to trust others plays out each day as he watches Shadow open up to Hope. Her love and unwavering belief in the wary dog lead Cade to believe that, perhaps, even he can be saved if he is willing to trust Hope and himself.

The doubts, fears, and loneliness experienced by both Hope and Cade are the things that keep them apart and the very things that bring them together. Accepting help and support is as hard for Cade as accepting his blamelessness in being alive. Letting another person into her heart is not easy for Hope. Together, they must learn to lean on each other and recognize that nobody should go through life alone.

Macomber weaves together a story of loss and regret in which love is the only thing that can cure the pain. It is a beautiful reminder to all that family, friends, and faith in oneself and others are necessary components in life. Only by opening one’s heart to love and trust can we see that the best is yet to come.