The Best Writing on Mathematics 2015 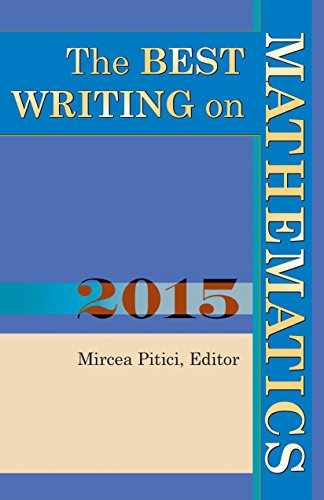 “Pitici’s editorship has yielded an issue that is the most cohesive and impressive to date.”

As with previous reviews on The Best Writing on Mathematics, not every essay will be identified in this review.

The first of the essays in this year’s The Best Writing on Mathematics reflects the series’ purpose. “A Dusty Discipline” by Michael J. Barany and Donald MacKenzie is an ode to the chalkboard as a conveyer of information. “The blackboard forces us to recognize . . . no result, no matter how it impacts some logical standard of the truth, can be accepted if there is no clear way to write or share it.”

A significant portion of the essays treat mathematics through games and puzzles ranging from algebra to geometry and including puzzles in logic, chess, automata, magic squares, billiards, and juggling. As well, there are serious essays on proofs, modeling and statistics, essays on the art of visual perspective, and mathematically inspired artists, an essay on mathematics driven shapes and geometry, and an essay on modeling addresses synthetic biology towards creating “living” materials to perform useful tasks.

Of the games-oriented essays, this reviewer was particularly intrigued by “Candy Crush’s Puzzling Mathematics” by Toby Walsh. This reviewer holds that though enjoyable to play, Candy Crush is certainly difficult to win, which I guess is an indicator of its appeal. The author points out that that the game is computationally hard, and uses its difficulty as a lead-in to a discussion of the unsolved question of P versus NP.

In “The Quest for Randomness” by Scott Aaronson, Aaronson discusses what makes a number sequence random, and perhaps more importantly what makes a random number sequence useful. He also explores methods for determining lesser or greater randomness, asking, “Can you ever rule out the existence of a pattern just because you failed to find one?” Aaronson also addresses randomness in quantum mechanics, quantum entanglement, and faster than light computation, and claims that before too long we may have randomness based on the causal nature of space-time.

If one were to read the essays contained in The Best Writing on Mathematics 2015, in table-of-contents order, there wouldn’t be a “difficult” read until “The Quaternion Group as a Symmetry Group” by Vi Hart and Henry Segerman, not quite halfway in, and that there are only a few difficult reads that follow.

For those who appreciate proofs, there are a few essays on proofs, what a proof is, what makes a proof memorable, and how to teach proofs. The subject of teaching proofs it is but a small step to an essay on “The Future of High School Mathematics” by Jim Fey, et al. and “Demystifying the Math Myth” by Guili Zhang and Miguel Al Padilla. The former addresses the “common core,” and the latter compares differences between high school mathematics education in the U.S. and in China. The two essays seem to not quite get the point of the meaning of education, and a reader might wonder if the editor has selected these two knowing that despite being well-written they do miss the point.

Then there are the biographies. In “Let the Games Continue” by Colm Mulcahy and Dana Richards, the authors honor mathematic puzzler extraordinaire Martin Gardner, who was a brilliant and well-published polymath.

Less joyful is “Gödel, Gentzen, Goodstein” by Jan von Plato, which begins as an essay on mathematicians who try to publish proofs while also keeping contact with each other across a world at war. Here, the mathematician of interest is Gerhard Gentzen. Gentzen was arrested at the end of WWII at the German University in Prague and then starved to death in a Russian prison camp.

For this reviewer, the most intriguing essay is “Global and Local” by James Franklin. Franklin examines the distinction between local and global in mathematics, which may seem simple but is subtle and have significant implications. The author states, “It is impossible to build a circular or nearly circular staircase that goes up all the way ’round and end at its starting point . . . The impossibility is not just empirical, because no change in the laws of nature would make such a staircase possible. There is a purely mathematical fact underlying the impossibility, namely there exists no continuous function from the (oriented) circle to real numbers that is increasing all the way round. That theorem involves the global/local distinction in an essential way: locally—at any point on the circle—it is possible to find a neighborhood and a function from the neighborhood to the reals that is monotonic increasing; but it is impossible to fit these local choices together to construct a function from the whole oriented circle to the reals that is increasing everywhere.”

What makes the discussion truly interesting is that global solutions have properties unlike local solutions, to the consequence that the global/local distinction is of importance outside of pure mathematics, in such fields as cosmology, economics, and computer science.

The essay “Mathematical Beauty, Understanding, and Discovery” by Carlo Cellucci considers mathematicians’ use of the word “beauty” in describing mathematical proofs. Cellucci states, “Doubt has been raised whether the apparent aesthetic judgments that mathematicians often make are really aesthetic at all.” He provides a number of reasons why this might be; more or less leading to the (perhaps obvious) conclusion, that beauty is in the eye of the beholder.

“A Guide for the Perplexed: What Mathematicians Need to Know to Understand Philosophers of Mathematics” by Mark Balaguer is a primer on arguments in the “philosophy” of mathematics. This essay suffers from vagueness that results from not defining terms before using them, which is exactly the problem non-philosophers have with academically trained philosophers. In consequence this essay may seem deep but is not, just muddled into confusion. Argument by using undefined terms may be difficult to follow, and also may be pointless, leaving the reader more unsure than before.

“Is Big Data Enough? A Reflection on the Changing Role of Mathematics in Applications” by Domenic Napolentani, Marco Panza, and Daniele C. Struppa, is a righteous manifesto that just might just be claiming to be true—what is actually just one step over the edge of what is possible. As a manifesto this essay might be an overreach but then again it might not. The claims are ambitious and the references worth a look.

The essay “The Statistical Crisis in Science” by Andrew Gelman and Eric Loken identifies certain types of mistakes that have been made by misinterpreting statistics. That is, the smaller the sample size, the more likely a researcher may be drawn to mistaken conclusions. Mistakes of this type lead to the oft-quoted retort “correlation is not the same as causation.” The method of abuse identified in this essay is called “p-hacking,” something that affects small sample sizes, and it is interesting to note that statistical methods intended to be used, “[as] a means of protecting researchers from declaring truth based on patterns in noise. In an ironic twist . . . [are] often manipulated to lead credence to noisy claims . . .” With small data sets, there may be the need to point out that there may actually be no correlation to begin with. Misinterpretation when done unintentionally is called “getting fooled by noise;” when done intentionally is called a “fishing expedition.” What may drive p-hacking and publishing nonsense is a fierce academic pressure to “publish or perish.”

In “Statistics and the Ontario Lottery” by Jeffrey S. Rosenthal, Rosenthal used statistics to identify real-life fraud in the Ontario Lottery. The fraud was not committed by ticket holders, but by the owners of the stores that sold the tickets. It appears that the owners were winning in numbers higher than the rest of the population. The fraud was exacted by the owners telling the ticket holders that their winning tickets were losers and claiming the winnings for themselves.

Well deserving essays that didn’t make this year’s cut are identified in four pages of tiny font in the introduction, and at the back there are an additional ten pages of Notable Writings, again in tiny font. The end pages also provide contributors’ notes, which are short autobiographical sketches of the authors, one of whom is still in high school.

Compared to the previous issues in this series reviewed here, this year’s The Best Writing on Mathematics has been by far the easiest to read, while losing none of the ability to make one think. Pitici’s editorship has yielded an issue that is the most cohesive and impressive to date.