The Best Writing on Mathematics 2011 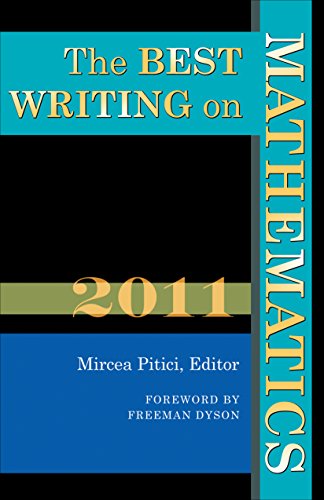 “Those wild and crazy mathematicians! . . . The Best Writing on Mathematics 2011 is so valuable that this reviewer plans to read it twice again. . . . This collection is just that good.”

True story: I emailed my boss at NYJB to ask if any reviewer had already grabbed The Best Writing on Mathematics 2011 for review. She replied, quote, endquote: “Haha! You!”

The Best Writing on Mathematics 2011 is so valuable that this reviewer plans to read it twice again. The first reading was performed with a critical eye for this review; the second will be for following up references and links; and the third will be a revisit for the pleasure of such wonderful writing and illustrations. This collection is just that good.

The essays range in topic from (bear with me now) number theory, to art, sociology, education, history, philosophy, and physics. All strive “to get the message across that math is important, fun beautiful, powerful, challenging, all around us, and central to civilization.”

The Best Writing on Mathematics 2011 may not light up the fires of literature regarding the English language—the authors’ explanations of the world mathematical are clear and simple but not so simple as to lose the interest of those with greater math experience. But all the essays in this collection should be understandable to readers who have only a smattering of math experience.

The foreword to this collection was provided by Freeman Dyson, physicist and author, on a topic that is only marginally reflected in the remainder, recreational math. Yes, no joke, recreational math. Math done for fun. This should not really be so hard to accept considering the popularity of Sudoku.

For this kind of math you don’t have to be part of the serious world of education, finance, history, or philosophy. To be a recreational mathematician, you don’t have to be an expert or to know the jargon. And while reading Dr. Freeman’s forward I found myself following along with the problem, writing in the margins just to make sure I understood.

In his foreword, Dr. Freeman also explores the relationship between mathematics and religion, using number theory to explore the Big question—not the question “Does God exist?” but one even more important: “Does God have ten fingers?” I won’t spoil it for you.

The essay in this collection that comes closest to Freeman Dyson’s love of recreational math is on the drawing of Apollonian Gaskets, a problem originally posed by the Greeks but not fully solved until the 1990s at AT&T Labs by use of computers. It just might be interesting to note that there is a long standing tradition of, when publishing extensions to Apollonian theorems, writing the extensions in poetic form. Those wild and crazy mathematicians!

Note that the essays in this collection spend very little time on mathematical “proofs,” which is the one thing most everyone hates about math. Yet there is one math-phobic-proof essay on the history of some of math’s jargon: specifically, the origins and uses of such words as proof, axiom, hypothesis, postulate, and proposition. From this reviewer’s experience, these words are often used by instructors without any definition at all, and students are typically too intimidated to ask. The clarification here is quite helpful.

The very first essay might be considered the most controversial. Underwood Dudley’s claim in “What Is Mathematics For?” is that having an education in mathematics (math that is not simple arithmetic but also algebra and geometry) is not useful in daily life. His claim is that math in daily life (for non-mathematicians who need to use math) is nothing more than looking things up in tables!

Moreover, Dr. Dudley continues, the purpose of teaching math is only for the purpose of training in logic: to develop the powers of reason. Putting “What Is Mathematics For?” first is something guaranteed to grab the reader’s attention and shows a certain canniness on the editor’s part. What craziness will come next? This claim is so well argued however that when reading further in an essay by a math educator who says something similar—that the aim of teaching should be not to convey facts or theorems but to build quality of mind—Underwood Dudley’s claims seem somehow less outrageous.

There are several essays centered on the topic of math education: on teaching, teaching students math, teaching teachers how to teach math, teaching students how to do research, and teaching students how to network socially. I’ll just point out one by John Mason an instructor at the Open University in the U.K., who recommends that math teachers choose breadth and depth over fulfilling the curriculum (another controversial topic), and Mason also suggests the practice of solving problems in the open (without a safety net) instead of than copying out canned problems. This permits the student to see the instructor struggle, humanizing the effort. In several essays including this one, George Pólya, mathematician and author is pointed out as an influence. (And this reviewer proudly admits to owning (and reading) Pólya’s How to Solve It.)

There’s even an essay on the Rubik’s cube. The competition for solving a scrambled cube as fast as possible is called speed cubing. The search for the fastest possible solution is the search for the minimum number of steps. A step is a face turn, which is a turn of 180 or 90 degrees. The shortest number of steps has been called God’s algorithm (What if the Higg’s boson were discovered to be a Rubik’s cube?). That the minimum number of steps to solve Rubik’s cube is 20 face turns was not known until July 2010 and was determined by use of a farm of computers, and it was estimated that a brute force effort done by one average PC would take 35 years!

Another essay looks at the possibility that mathematicians and their financial models were the cause of the ongoing U.S. financial crisis. There are several variants to this conjecture: Was the math wrong or were there limitations on the financial models? Or were the limitations not properly communicated? The author suggests that fundamentally there was a false premise: that the use of new financial models would lead to stability. This essay notes that there was a delay between application of the model and collapse—that warnings were missed or ignored along the way.

There are several essays on math in the arts, in particular mathematics driven surfaces in sculpture, including knots, toroids, Möibus strips, and manifolds. These essays cleanly segue into topics such the butterfly diagram of Lorenz systems, chaos theory, and strange attractors, then segue back into the relationship between computation and sculpture, including the design of a fountain that uses the Fibonacci series as a height profile.

My favorite essay in this collection is on the mathematical underpinnings of M. C. Escher’s art. “The Mathematical Side of M. C. Escher” was written by Doris Schattschneider, who had access to and shares with us images from Escher’s notebooks, letters and lecture slides. And while M. C. Escher steadfastly denied having any ability to understand math, we discover that understanding was there but was intuitive: that his explorations as documented were organized and systematic.

Escher’s notebooks show that he performed research on plane filling, periodic patterns, and tiling. After the International Congress of Mathematics (IGM) was held in Amsterdam in 1954, he exchanged letters with the mathematician George Pólya, and then became known to and influenced mathematicians outside of Holland, including the mathematician and physicist Roger Penrose, with whom he also entered into correspondence. Penrose went on to create some Escher-like drawings of his own.

This collection also includes essays on mathematical philosophy including, “What Makes Math Math,” by Ian Hacking. The question of what makes math, math is different from, and more open-ended, than the question of what makes proof, proof. The difficulty in answering this question is that math is not one activity but a collection of miscellaneous ones. Defining just what that collection is though, is hard to do. Perhaps it is the wrong question to ask. Hacking admits that the definition of what math is, is less important than the “disciplinary boundaries” that have emerged from its practice. Which is more or less the same as saying what math is, is less important than what mathematicians do.

This wonderful book is not just a collection of essays; there are also references including a list of notable texts, links to mathematics websites, and biographies of the contributors, which may prove to be as valuable to the reader as the essays themselves. The Best Writing on Mathematics 2011 cannot be recommended highly enough!