The Best of Us (Sullivan's Crossing) 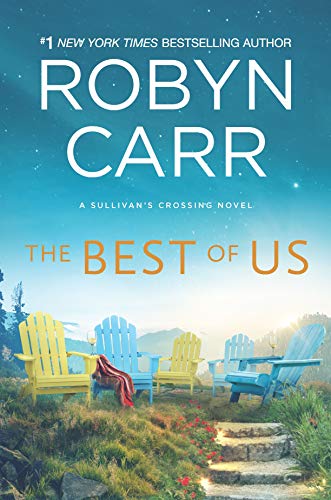 Dr. Leigh Culver is a physician in the small town of Timberlake, Colorado, after moving from a job with long hours at a Chicago hospital. Leigh finds the slower pace in the mountains to her liking, and she knows this move is needed for her to be independent after residing with her Aunt Helen who raised her for more than 30 years.

Helen devoted her life to raising Leigh after her younger sister died when Leigh was very young. She never wed and worked tirelessly as a teacher and author to keep them afloat. Leigh has been her main focus, though, at age 62, it's now her time.

Leigh is welcomed in her new home, yet she has no real personal life. Friends since toddlers, she believed in Johnny—literally the "boy next door"—and she would marry only to have him walk away a few weeks before their nuptials stating he wasn't ready to commit. Young, heartbroken, and humiliated, Leigh immerses herself in her school work to become a dedicated family practitioner. But the hours and stress in the hospital make her rethink her life. With a two-year offer from the Colorado clinic, she accepts the position.

The owner of the town's pub, Rob rushes his son, Finn to see Leigh. He cut his hand on a glass in the dishwasher and is bleeding profusely. Rob remains while Leigh attends to Finn, though after glimpsing the damage, Rob becomes faint. Leigh advises him to sit down and take deep breaths, and when through ministering Finn's wound, she cares for Rob by massaging his head and shoulders, at which he proclaims:

"'Listen, I think we should just get married,'" he said."'You're perfect for me. You make a good living, you know how to get out blood stains and that head massage thing—that's a little addicting.'"

Leigh's response: "'Not interested, but really—I just can't thank you enough for the offer. It sounds enchanting.'"

Leigh remembers how much Johnny hurt her in her past. Helen is still in contact with his mom and confirms Leigh dodged the bullet after hearing he's on his second divorce. The thought of what could have been makes Leigh shudder.

Rob and Leigh begin to see each other and before long the chemistry between them is palpable. They do not talk of a future for Rob dealt with the death of his wife and raised his two sons himself. Now that the boys are almost grown, he cannot go through that again. Leigh, with her painful past, does not plan to settle down for she cannot trust any man and refuses to lose her heart again.

Meanwhile, Helen befriends, Sully, the gregarious elderly gentleman who owns the Sullivan's Crossing campgrounds. An unlikely pair having nothing in common, they enjoy each other's company. May there be a chance at love for Helen at long last?

This fourth addition to the Sullivan's Crossing series, The Best of Us is a charming novel containing well-defined characters. It can stand alone, though the several members of Sully's family mentioned can prove confusing so it would help to read the preceding books to be familiarized with all involved. The premise of the plot is somewhat predictable, yet the small town camaraderie, the colorful mountain locale, and straightforward prose highlight the down-to-earth players making this a fun and delightful tale