The Best of The Three Stooges Comic Books 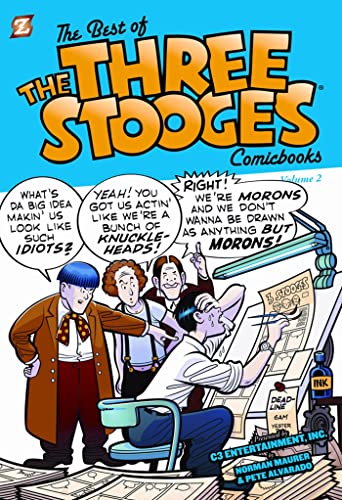 For a team known mostly for incredible violence, reckless abandon, and general stupidity, the stories reprinted in this hardcover collection are can only be described in one word: charming.

What? Three guys who are primarily known for slapping each other with abandon, pounding each other with hammers, dragging the blade of a saw across the top of Curly’s skull, throwing massive pie fights and general disrespect for the well-being of themselves and other citizens are charming?

Yes. In fact they are not only charming, the stories exhibit a gentleness that you don’t really expect from The Three Stooges.

Of course it wouldn’t be The Three Stooges if someone weren’t getting slapped occasionally. But comics are a different medium from the screen and the artists and writers of these books knew it. The gentler stories reflect an understanding that comics of the day were meant for kids and that kids want an engaging story as well as attractive art.

This full-color volume opens with the two complete issues of The Three Stooges’ 1953–54 run. At the time Shemp was then being featured in the filmed shorts so he was logically featured in the comic book as well.

Next up are three strong issues from Dell (1960–61). TV had opened a new generation to their antics and this title lasted quite a while. With Shemp and Curly gone, Curly Joe joined the team.

Updating the team for the time, the title features the adventures of the sons of the three Stooges. The apples hadn’t fallen far from the trees and the boys were just as wild as their fathers had been when they were young.

For a book that covers nearly 20 years of comic history, it is relatively consistent in quality and tone. The main reason for this is Norman Maurer.

A respected artist who had drawn the Golden Age Daredevil among many other titles during the forties, Mr. Maurer was able to adapt the kinetic style of the boys to the four-color page. He understood that comic books were still a “kids” medium. Working with Moe he tailored the books to that end.

As the sole artist on the first two issues Mr. Maurer fills each panel with wonderful detail. He had a great sense of space and how to fill it.

Working with Joe Kubert who also helped him edit many of the early stooge issues, Mr. Maurer created the first successful 3-D comic book. The book featured Mighty Mouse and was a runaway hit; he uses this success for an inside laugh or two.

In a one-page story, the three stooges are barbers. Their next customer is a kid who has been dropped off by his mother for a haircut. The kid is so absorbed in his 3-D comic book that he doesn’t realize that the stooges have given him a haircut worthy of the glory days of punk rock. He sits there stoically engrossed in his comic as everyone around him goes nuts. It’s a hilarious page, maybe the best in the book.

In another panel Mr. Maurer has the stooges’ pal Benedict Bogus going crazy. Mr. Maurer leaves the ghosts and haunted figures slightly out of focus while he holds the center image tightly focused. It is an unusually striking panel that wouldn’t have been out of place in an EC title. Mr. Maurer had some serious chops.

For the issues from the early sixties Curly Joe takes center stage. Mr. Maurer was occupied with his work in Hollywood. He was producing and directing films such as Who’s Minding the Mint as well as several stooges features, so he turned the art over to artist Pete Alvarado.

An animator who had worked at Warner Brothers and Hanna-Barbera, Mr. Alvarado’s work reflects the simplicity of Hanna-Barbera house style. Mr. Maurer’s deep backgrounds and interesting panel construction are gone, but illustrator Alvarado’s work matches the times in which the books appeared. No one expected more. The writing is tight and the stories hold our interest.

Mr. Alvarado was followed by Joe Messerli who had ghosted on the Ella Cinders newspaper strip as well as the Dennis the Menace comic books. His style on the two issues returns the books back to the world of comics.

The book closes with two issues of The Little Stooges written and drawn by Mr. Maurer and his son Jeffery. They are a great take on the way The Three Stooges had changed over 30 years.

In addition to being funny, there is another reason that The Three Stooges were able to last so long. Moe Howard was really pretty smart. This isn’t something that he gets a lot of credit for. He saw something in his son-in law that the boy didn’t see himself. He knew that Mr. Maurer had the ability to keep the franchise in the family and still serve it well. And he was right. Together he and Mr. Maurer kept the team in the public eye for decades after they had left the screen.

Inside this wonderful compilation every cover of the original books is perfectly reproduced. This includes the photo covers of the sixties. The book also includes many house ads and promotional features from the time. There is a historic interview with Mr. Maurer as well as an excerpt from Editor Jim Salicrup’s 1984 interview with Kubert centering on his friendship and time with author Maurer.

The book is a testament to the vision of Moe as well as the skill, both artistic and managerial, of Mr. Maurer. In addition to being a darn good read, Papercutz’ second volume in the series is a respectful homage to them both.