The Best Place on Earth: Stories 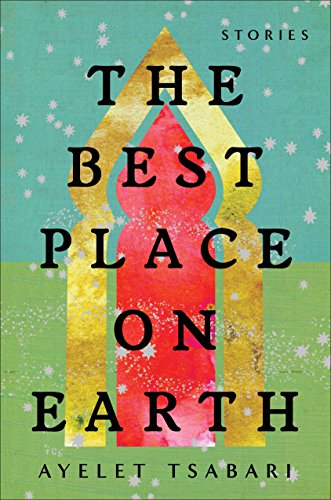 Location, location, location—geography can determine not only the cost of our homes but also where we feel at home. The takeaway from Israeli Canadian writer Ayelet Tsabari’s prize winning debut story collection The Best Place on Earth is that living in Israel comes at the cost of the perpetual threat of violence as well as the claustrophobia found in any small country, while living in the diaspora has its own price in weakened Jewish identity and cultural continuity.

In the face of such a predicament it should be no surprise that some young Israelis chose to relocate abroad viewing loss of cultural identity as the lesser evil if not in fact a desired outcome. After all, there are people in every country who feel a need to live and reinvent themselves somewhere else. For readers with strong Jewish identities and Zionist sympathies, reading stories about young Israelis who feel their most authentic selves require them to shed their native identity can be painful.

The 11 stories take place in Israel, Canada, and India, and many of the characters are Mizrahi Israeli young adults (the grandchildren of immigrants to Israel from Muslim countries such as Tsabari’s Yemenite grandparents) who are less traditional and more individualistic, cosmopolitan, and international in their outlook than their siblings, parents, and grandparents. The violence in the stories that take place in Israel includes Iraqi missile attacks during the First Gulf War, suicide bombings during the second intifada, and IDF casualties during anti-terrorist combat operations in Gaza.

The book has been compared to the early work of Jhumpa Lahiri and also resembles the work of such immigrant writers as Tsabari’s fellow Canadian David Bezmozgis and Filipino-American writer Mia Alvar, but unlike those writers whose characters have one foot in their country of origin and another in their adopted country, Tsabari’s Israeli new Canadians are remarkably well adjusted and integrated into their new country. This is perhaps because Israelis start out from a more democratic and affluent country than do Bezmozgis’ Russian speakers and Alvar’s Filipinos.

The book’s second story, “Say it Again, Say Something Else,” is set in Israel and describes a friendship between two new Israeli teenagers, one Canadian and the other Belarusian, that is reminiscent of the title story of Bezmozgis’ debut collection Natasha and Other Stories. The Canadian’s Mizrahi veteran Israeli aunt and guardian considers the Russian speaking immigrants her social inferiors.

The story in this book that most resembles Alvar’s debut book of stories In the Country is “Invisible,” whose protagonist Rosalynn is a Filipino caregiver whose visa has expired, who can be arrested and deported at any time, hasn’t been back to the Philippines (where she cannot earn comparable wages) or seen her 13 year old daughter for many years, and works for an  elderly Yemenite Israeli woman in a suburb of Tel-Aviv who as a young woman had a similar job. Despite the precariousness of Rosalynn’s situation, her working conditions are benign compared to those of Alvar’s characters who work in the United Arab Emirates.

Within Israeli fiction The Best Place on Earth is one of three recent fiction books written in English by young Israeli women. The others are Shani Boianjiu’s novel about the IDF service of three teenage Israeli women, The People of Forever Are Not Afraid, and Sheli Oria’s book of short stories set in America and Israel that also feature Israeli ex-pats, New York 1, Tel-Aviv 0. Compared to Oria’s distant, cool, concise prose style Tsabari’s is warm, intimate, and humane; if Oria is Goddard, Tsabari is Truffaut. The titles of Boianjiu and Tsabari’s books both come from bumper sticker slogans.

Tsabari’s story “Casualties” opens with a scene of sexual promiscuity similar to that portrayed in the work of Boianjiu and Oria: “Around our third shot of Tequila, I know I’m going to have sex with the cute paratrooper who’s been flirting with me all night.” Like Boianjiu’s women soldiers, Yael, the narrator of “Casualties” is a female IDF conscript who is about to cheat on her boyfriend Oren, a soldier serving in Gaza whose mental health is deteriorating under the stress of combat. She works as a medic in a Tel-Aviv army clinic and off-duty sells forged two-day health passes to fellow soldiers. Will she get caught? Will she break up with Oren? The surprise ending is powerful.

For Tsabari’s Israeli expats ancestry is not destiny. In only one of the stories set overseas, “Brit Milah,” does the character, Ofra, make any effort to live a culturally or ritually Jewish life in suburban Toronto, and even so, while a Hanukkah menorah sits on the window sill beside Christmas lights, she and her husband (who identifies as Jewish even though his father is Jewish) inform her visiting mother Reuma that they have decided not to circumcise their infant son Yonatan. In the 1960s Israeli poet David Avidan said when he and his wife decided not to circumcise their son that he would figuratively circumcise his son with the Hebrew language. Readers can only guess whether Ofra will speak Hebrew to Yonatan.

In other stories set in Canada and India Tsabari’s young Israeli ex-pats feel no need for community other than a gentile partner and a mostly gentile circle of friends. In the book’s title story Naomi visits her ex-pat younger sister Tamar in Vancouver. Looking around Tamar’s home, “Naomi noticed that there was nothing Israeli or Jewish about it, no mezuzahs on the door frames, no hamsas like the ones their mother had hung all over their home for good luck, no dangling strings with blue threads to repel the evil eye, no calendar with Jewish holidays marked upon it.” When Naomi asks if Tamar’s new boyfriend is Jewish, “Tamar laughed in a short burst and shook her head. ‘I forgot that Israelis always ask that. You know people actually consider that rude in other parts of the world. It’s like asking people what their sexual orientation is.’”

In “A Sign of Harmony” dark skinned Yemenite Israeli Maya lives part of the year in Europe and part in India, where she speaks rudimentary Hindi, wears Indian clothing and a bindi in an attempt to fit in and not stand out, but doesn’t realize that Indian women don’t travel alone, which leads Indians to assume she is a prostitute. When her Indian-English boyfriend Ian arrives he feels more foreign and out of place in his ancestral homeland than Maya does.

Most of Tsabari’s characters are quite young and either have yet to settle down in their respective locations or have only begun to. Readers can only speculate as to whether as they become middle aged her ex-pats and their children will reconnect with their heritage and perhaps draw closer to their local Jewish communities. Maybe the answers to such questions require long-form fiction. Fortunately Tsabari is currently writing a novel, which readers of The Best Place on Earth will look forward to with avid anticipation.