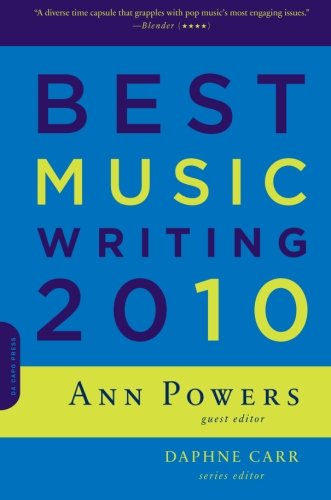 Sometimes music writing feels like high school—all cliquish and exclusive. It seems like the writers purposely try to make people feel stupid and left out of the popular group either because they do not know what some obscure artist had for dinner on the third Friday of November 1983, or because they are unable to name every group in the subgenre of Pop Alt Rock Metal.

This collection walks a fine line between being informative and braggadocian pontificating. A handful of essays in this book are truly good enough to be called the Best Music Writing of 2010.

Three in particular rise above all the noise in this anthology: Michelle Tea’s “The Gossip Takes Paris” that makes lead singer Beth Ditto sound really cool and a little manic; Randall Robert’s “On the Road to Burma: Globetrotting with Ozomatli,” which is musically-based and socially-conscious at the same time; and lastly Jason Fine’s long piece “The Fighter: The Life and Times of Merle Haggard,” which is simply well written. All of these essays make the reader want to explore the music of these artists if they have not been fans before. That is what good music writing should do—it should pull the reader into the music.

Part of the trouble with the rest of this book, however, is that in a lot of the essays music is barely mentioned. Instead of being the rightful focus, it becomes more like Muzak: background noise that no one enjoys, even in elevators. After Tea’s delightful first essay, the next 100 pages or so are devoted to race issues. Race can play a factor in the development of music, but the tones of these offerings were more inflammatory and off-putting. This is a book about the best music writing, not Race Wars 2010, and the labeling and differentiation is entirely unnecessary.

Music is supposed to transcend being categorized. Some of the best (and most remembered) music in the world was successful simply because it crossed and blended genres and the artist was not content to remain a square peg in a square hole. Even Michael Jackson (the topic of a couple of essays in this book) said, “It doesn’t matter if you’re black or white.” Labeling something (especially in derogative sense) at this level not only cheapens the message of the music, but it pulls everything down into the worldly muck and grime that most of us aspire to escape, using music as our gateway to freedom. If this compromising entity is what the music industry has devolved into, then it is no wonder it is in so much trouble.

The Best Music Writing of 2010 definitely has good moments. Too bad they are few and far between.