In the Best Interests of Baseball?: Governing the National Pastime 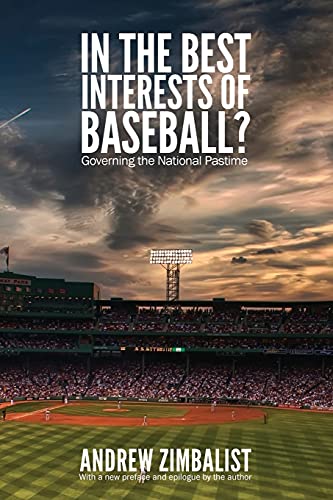 Perhaps you never thought about major-league baseball as a monopoly, but it is.

The top level of male professional baseball is a closed group, with entry carefully controlled by its current members. Nobody can bring another pro baseball team into their territory without starting a fight with them.

In addition, these members restrict the product they produce (professional baseball games for viewing by fans) in order to maximize the value of that product. That means keeping close control of players, broadcasts, and anything else related to the games.

But besides being members of an exclusive group and defending the group from incursion by outsiders, these baseball companies must cooperate with each other in order to produce the games they sell. That cooperation requires holding meetings to settle upon the rules of competition, including the rules concerning who will control what as well as the amount of money their obligations will cost them.

Unfortunately for professional male baseball, the owners of these separate companies find it so difficult to cooperate that they spend much of their energy fighting. That includes name-calling, accusations, refusing to work together, and instituting legal cases against each other.

In 1903 the major-league club owners finally realized that they needed a leader to adjudicate all these complaints. Although each league already had a president, they chose one of their own club owners, Garry Herrmann, owner of the Cincinnati Club, as Commissioner of all the clubs. Herrmann did his best, but he could not avoid the appearance of favoritism for decisions that that would benefit his own club.

When professional male baseball had reached its lowest point, as major-league players succumbed to the offers of gamblers while owners seemed unable to control events, the club owners finally selected an outsider, Judge Kenesaw Mountain Landis, to rid them of their problems and restore integrity to the top level of baseball.

Landis, a flawed figure—capricious, selfish, pretentious, and dramatic—cracked down on the players and enforced acquiescence from the owners by means of stiff fines. His despotic rules and decisions, although often unpalatable, proved salutary. From then on—until the present era, with the selection of Commissioner Bud Selig—the major league club owners realized that they needed an outsider to keep them in line.

Economist Andrew Zimbalist devotes this book to explaining the rule of each commissioner of baseball, his challenges, his failures, and his successes. The author's even-handed treatment of each commissioner results in a solid history of the way major-league baseball owners have demonstrated their arrogance and greed, trying in every possible way to work against the rules they themselves had passed and to undermine the decisions of the commissioner they themselves had selected to govern them.

Disputes have arisen over player trades, revenue-sharing, territorial rights, use of television income, player relations, salary caps, promotion, spying, gambling, schedules, illegal use of money, and drug use. The owners are constantly trying to jockey ahead of each other by fair means or foul. The game as it is played on the field takes second place to all these devious maneuverings by administrators.

Mr. Zimbalist takes as his theme a phrase embodying what the commissioner is supposed to represent: an effort to make rulings that are "in the best of interests of baseball." The phrase is vague enough to provide a source of frequent wrangles with owners, not excluding court fights in which owners argue against their own commissioner.

Should the commissioner try to represent the interests of players? The interests of fans? Nobody really knows, although sometimes (when convenient) the phrase is interpreted to include those two groups.

One thing Mr. Zimbalist omits from his narrative is to criticize the major-league clubs for having taken over the word baseball, for when they say that word they mean only the professionals and only those males who own and run the top-level professional leagues.

In other words, they mean themselves, for to them no other kind of baseball exists but the kind they control. They conveniently forget that thousands of other people in this country and other countries identify with the word "baseball" by playing it in amateur leagues or in schools and colleges, by preparing to enter minor-league levels of play whether they are affiliated with the major league clubs or not, and by joining clubs and leagues run by and for women players or set up for children. All this is baseball, too.

And much of what happens in these disputes among the major-league clubs and their commissioner is hardly in the interests of the rest of the world of baseball.

The first edition of this book, published in 2005, introduced the reign of Commissioner Bud Selig, and this new edition covers Selig's continued attempt to control the major league owners and help them solve their problems. Selig, although drawn from the ranks of the owners, has proved to be the most successful leader they have ever found. He runs major-league baseball by the use of carrot and stick as well as behind-the-back criticism of selected owners.

Although Commissioner Selig has not avoided lawsuits, he has overseen an era of unprecedented financial achievement, for himself as well as for the owners, along with improved player relations. Selig seems to know what is “in the best interests” of the major leagues.