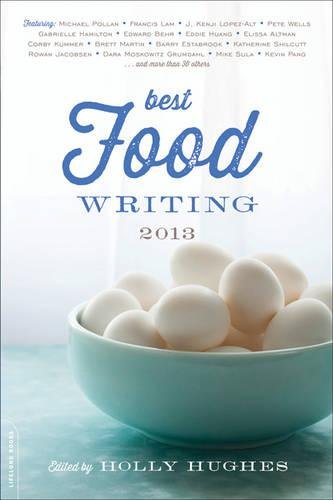 “. . . enough variety, like a box of chocolates, that one can poke around the book looking for the one with caramel and find it.”

Essays, newspaper and magazine pieces, cookbook introductions, and the like are compiled into a “best of” series—all focusing on gustation or food itself.

The contents of this volume are broken down into seven sections that focus very specifically on subjects such as current food movements such as the slow movement or eating locally; the tastes of food that expresses a certain location but often aren’t considered worth writing about culturally, such as the McRib or a Hostess cupcake; and the Farm to Table movement, specifically looking at certain segments, including cheese-making or collecting snails in the backyard for an escargot dish.

Meats are given their own section wherein how Iberico ham is made and the idea of cruelty-free meats are explored; then there is a section on home cooking that discusses favorite recipes of chefs discovering what is local in a community, and includes some recipes; a section on being a chef includes essays on the art, how the profession is seen from the outside, and the skills it takes to be a professional chef as well as some personal journeys of the writers; finally, the book ends with a section on personal tastes including comfort foods and table rituals like saying grace.

The book includes several well-known food writers including Michael Pollan, Dan Barry, and Francis Lam. Many writers have published their own books, have a regular newspaper column or magazine segment, or have their own TV shows.

While these essays are collected into a single volume (the series started in 2010), the essays each reflect a unique voice, making for a lovely variation on a theme. Initially, a book on a single topic with multiple people talking about the same thing may seem over- or underwhelming. Whether a vegan, vegetarian, meat-eater, a believer in the slow movement, or a localvore, there is an essay for everybody.

The essays are thought-provoking and moving as each author is writing about something very personal: their own tastes and ideas about what makes a great meal—whether it’s the company one keeps or the particular pasta one purchases. Each essays is accompanied with a biographical sketch and synopsis of the essay included, which helps the reader put the essay into context. This is an absolutely terrific and engaging book.

A favorite essay was “Cooking Isn’t Fun” by Tracie McMillan. While I enjoy cooking for other people from time to time, cooking for myself is awful. In the past I have ordered so many pizzas from the local Papa Johns that I earned multiple free pizzas within a two-month span. Ms. McMillan’s essay doesn’t offer tips about how to make cooking fun or encourage a change of mind, rather she bluntly states that one must consider this another chore required to take care of ourselves, such as brushing our teeth—necessary for eating healthfully and well to stay alive and function at our best—straight-talking sympathy but no nonsense advice.

It can be disheartening cooking for one or frustrating to cook for a large family, but recognizing cooking as a necessary chore can encourage readers start to taking better care of themselves.

In each essay, the reader will learn something new. This isn’t meant as an advice book on how to cook or why to cook, rather this is simply a collection of the best essays collected over the year from Slate, Food & Wine, the New York Times, TableMatters.com, and more. Some essays are more engaging than others, but there is enough variety, like a box of chocolates, that one can poke around the book looking for the one with caramel and find it.