The Best of Flair 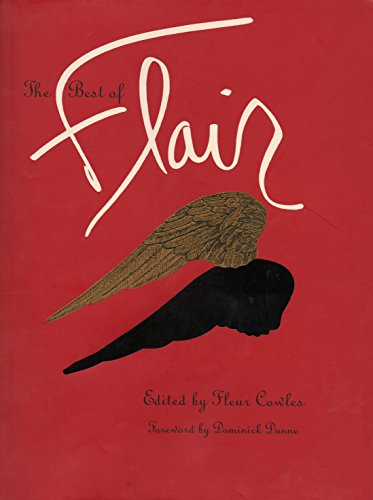 Where to start? If you have only heard of but never experienced the pleasure of perusing Flair then you are in for one of the greatest reading experiences that can be afforded to any reader who appreciates what a true lifestyle magazine might entail. Fleur Cowles, founder and editor of Flair, raised the bar to stratospheric heights in the 50s and has not had it surpassed since.

To say that Ms. Cowles was prescient is an understatement. To say she was so ahead of the curve doesn’t even begin to cover what she conceived and brought to life with the abbreviated life of Flair. She literally configured a template for a magazine that no one has ever dared to challenge.

“Fashion was depicted just as it was, beautified not camouflaged. Fashion news was explicit.”

This epic volume is a love letter to all who love reading magazines and still long for the meatiness and richness of the content of yesteryear. Flair was not just about pretty pictures though, as Ms. Cowles presented subjects from art to politics to travel to fashion and with an amazing stable of talent. Not only was she a brilliant editor and writer but she was also wildly savvy and clairvoyant when scouting and discovering new talent in almost any creative field.

As if the extremely intelligent and varied subject matter was not enough to mesmerize the reader, there is the element of presentation that catapults Flair into rarefied territory that has never since been explored and will probably never ever even be dreamt of today. Whether it is double covers, die cuts, or mini books within each issue there has never been anything like Flair. Imagine the most glorious content and construction with absolutely no cost spared and if you can conceive of that then maybe you can imagine the thrill of Flair.

There are not enough superlatives to offer when speaking of this book so if you have esthetic leanings or interest in almost any cultural aspect of life, then, this book is essential to all those who consider themselves cultivated and sophisticated. For once, this reviewer was not only wildly impressed but actually rendered slack jawed and speechless.